ALBUQUERQUE, N.M. — Imagine untwisting a finger-size spring, then holding the flame from a lighter underneath the unraveled section. Like magic, it twirls itself into a spring again because the metal alloy remembered its original shape.

Sandia National Laboratories researchers think such shape-memory alloys could be used to improve safety in weapons components in a fire or other accident. Materials scientist Don Susan said a thermal device made from a high-temperature shape-memory alloy might, for example, close or open a switch or lock a gear to prevent it from turning. 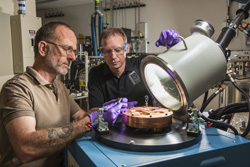 Sandia National Laboratories’ Mark Reece, left, and Don Susan examine a new shape memory alloy button they have removed from an arc-melter. Several new alloys have been developed at Sandia. (Photo by Randy Montoya) Click on the thumbnail for a high-resolution image.

Susan is principal investigator for a project that aims to create high-temperature shape-memory alloys for weapons components. Accomplishments so far:

The project, now in its third and final year, is funded by Sandia’s Laboratory Directed Research and Development program.

“I truly believe this research on [high-temperature] shape-changing alloys will allow us to create new devices that significantly impact nuclear weapon safety. The shape-memory alloys we are developing can passively change shape via exposure to a particular temperature or actively change shape by passing current, which generates heat, through the material,” McElhanon said.

Shape-memory alloys have been around for decades and various types are sold commercially. They’re commonly used in such medical appliances as stents that change shape at body temperature. A tiny stent, stored at below-body temperature, can be squeezed small enough to fit into an artery, then opens up the artery when warmed to body temperature, Susan said. 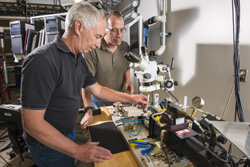 The Sandia alloys can change shape at temperatures below room temperature to greater than 500 degrees Celsius, or about 930 degrees Fahrenheit.

“Folks at Sandia were studying these alloys decades ago, but the temperatures were always too low to be useful for our parts until these new alloys came along over the past 15 years or so,” Susan said.

Any shape change has to take place above the temperature at which components are manufactured, Susan said.

In April, the Consortium for the Advancement of Shape Memory Alloy Research and Technology (CASMART) voted to add Sandia as a member. Government, academic and industry experts started CASMART in 2006 to share applied research on shape-memory alloys.

“Joining the consortium is a huge step forward for the labs,” McElhanon said. “We are collaborating with the world experts in the area.”

Sandia works on shape-memory alloys with Ron Noebe and his colleagues at NASA’s Glenn Research Center in Ohio and with colleagues at Texas A&M University in College Station. NASA and Texas A&M are both consortium members. NASA is interested in the alloys for flight applications, while the university works on materials processing — turning the alloys into specific shapes, Susan said. Texas A&M researcher Brian Lester worked with Sandia this summer on computer models of shape-memory alloy behavior.

“Our computer models can’t handle something that changes shape like that,” Susan said. “When you heat something up, it expands a little bit and when you cool it down it contracts. We can handle that in the computer codes, but not this more dramatic shape change.”

“They are really interesting materials,” he said. “Most of what we work on at Sandia is stainless steel, aluminum, the kinds of things we’ve worked on forever and that most of our parts are made of. So it’s interesting to work on something different and explore the possibilities.”