Heat it and read it

LIVERMORE, Calif. — You’re sweating and feverish and have no idea why. Fortunately, Sandia National Laboratories scientists have a device that can pinpoint what’s wrong in less than an hour. 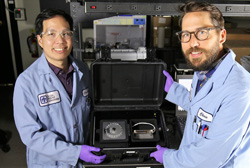 Unlike most medical diagnostic devices which can perform only one type of test — either protein or nucleic acid tests — Sandia’s SpinDx can now perform both. This allows it to identify nearly any cause of illness, including viruses, bacteria, toxins or immune system markers of chemical agent exposure.

The new addition of a heating element allows SpinDx to do nucleic acid tests, which search for genetic codes found in any kind of virus, parasite or bacteria. The technology can also detect toxin proteins at the same time, and determine whether they are active or not — a critical distinction for correctly tailoring the level of medical response.

The device’s portability, affordability, rapidity and reliability are critical for addressing infectious disease outbreaks in places most affected by them and least able to afford a laboratory with traditional instruments. In developing nations, diarrhea is the second leading cause of death in children under age 5, according to World Health Organization reports. These deaths are largely preventable when the causes are detected and treatment is administered early.

Helping save these lives is why Sandia’s scientists decided to test the new SpinDx capabilities on potential causes of diarrheal disease. Sandia’s research shows SpinDx successfully detects both diarrhea-causing toxins and bacteria in stool samples. Results of these tests were recently published in the journal Biosensors and Bioelectronics.

SpinDx looks a bit like a DVD player inside a weather-resistant plastic case. It features a disposable disc that distributes drops of raw, unprocessed biological samples into different channels that function, according to Sandia chemist Chung-Yan Koh, like “dozens of tiny test tubes.”

This automatic distribution step is a great time saver. Chris Phaneuf, a former Sandia bioengineer explains, “instead of having to drop processed samples one by one into dozens of tiny chambers, you can load one raw sample into a single, central port that evenly distributes your sample into every channel.” Phaneuf is now senior fluidics engineer at Illumina in San Diego, where he develops technologies for genetic research.

When the disc spins, the samples interact with test reagents inside the channels, and, as Phaneuf puts it, “if there’s a match, they’ll attach.” In other words, if there is a chemical interaction between the sample and reagent, a red laser causes the tip of the channel to glow, signaling an infectious agent to a software interface that displays the result.

Previously SpinDx performed only protein tests, which look for both pathogen-specific proteins and antibodies. Antibodies are proteins manufactured by immune systems in response to infections. When viruses later disappear from the blood, the antibodies that flushed them are still detectable. Protein tests also can identify lethal toxins like botulinum neurotoxin, a teaspoon of which has the potential to kill around 100 million people, according to Phaneuf.

Shining a LAMP on symptoms

Thanks to its new heating element and ability to do a new assay, SpinDx can conduct nucleic acid tests able to identify the virus or bacteria responsible for causing symptoms like diarrhea. “It’s much quicker to detect the causative pathogen in a sample than to wait for a body to produce antibodies to an infection,” Phaneuf said. “Being able to do both kinds of tests paints the most complete picture of what’s in a person’s system.”

Conventional viral testing (via polymerase chain reaction or PCR) requires heating and cooling a biological sample many times to multiply any viral DNA or RNA to detectable levels. Phaneuf and Koh implemented a new Sandia-developed assay and detection scheme in the SpinDx update, which uses chemistry that requires the sample be heated only once.

In other systems, the loop-mediated isothermal amplification (LAMP) method of heating a sample takes place atop a small heating block that creates a single, uniform temperature inside a device. SpinDx uses a tiny infrared heat emitter that hovers at the top of the device, targeting the part of the spinning disc performing the test and nowhere else.

Being able to control the heat flow allows for different temperature zones inside SpinDx, enabling the simultaneous nucleic acid and protein tests. Nucleic acid tests require a temperature that would ordinarily destroy a sample’s proteins.

SpinDx has been licensed by industry partners (see page 34) for uses as diverse as male fertility testing and water supply safety monitoring. With its new capabilities, the technology has the potential to improve diagnostic problems in settings around the world, and not just for humans.

Phaneuf described a highly contagious virus ravaging goats and sheep in parts of the world where those animals are central to peoples’ livelihoods. These communities often don’t have access to a laboratory, but this tool could quickly diagnose their animals and allow for proper treatment.

Sandia is also currently using the technology for research into bioenergy applications. Scientists are using SpinDx to search for predators that could cause the crash of algae being cultivated for biofuels and renewable chemicals.

Whether for medical or bioenergy applications, the ability to accurately conduct all these tests at the same time in one portable device and read the results in an hour or less sets SpinDx apart from other available systems. Traditionally, these results have required a well-equipped laboratory staffed with experienced technicians.

Koh and Phaneuf say they’d like to see batteries and solar panels added to SpinDx, making it deployable almost anywhere. It could even one day help a doctor quickly determine whether your symptoms are from the flu, your food or something else entirely.