ALBUQUERQUE, N.M. — Sandia National Laboratories is doing what it hasn’t done in decades: extending the life of a nuclear warhead at the same time the U.S. Air Force develops a replacement cruise missile that will carry the weapon.

The goal of the W80-4 Life Extension Program (LEP) is refurbishing the W80 warhead with replacement components for aging technology and components that have limited lifespans. Sandia’s California site is responsible for development of non-nuclear components and subsystems and for systems integration. Lawrence Livermore National Laboratory is responsible for the refurbishment of the nuclear explosive package and joint development of detonators with safety features.

“The LEP will update the interface between the warhead and the missile to meet current Air Force standards and requirements, assuring nuclear safety and security,” said Paul Spence, who joined the program in February as manager of the W80-4 Systems Integration department. The W80-4 LEP builds on programs that began more than a decade ago. 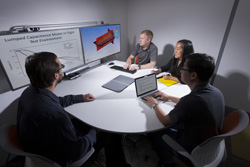 The W80-4 mechanical team at Sandia National Laboratories reviews the results of thermal analysis. From the top center, counterclockwise, are Ryan Johnson, Bryn Miyahara, Alvin Leung and Matt H. Jones. (Photo by Randy Wong) Click on the thumbnail for a high-resolution image.

A life extension program refurbishes aging components that are reaching the end of their service life. Scientists and engineers make decisions to reuse, remanufacture or redesign weapons components. A reused component is requalified to go back into a weapon without change. A component that’s determined to be past its original life is remanufactured to the original specifications. However, if some components can’t be remade to those specifications because the parts aren’t available anymore, Sandia redesigns them using modern parts.

In August 2014, the NWC, which coordinates stockpile activities for the Department of Defense and the National Nuclear Security Administration, chose the W80-4 as the warhead for the Long Range Stand Off missile, the Air Force’s successor to the current Air Launched Cruise Missile.

“Developing both at the same time requires a lot of cooperation and coordination between Sandia and the Air Force,” Spence said. The last time a missile and warhead were developed and fielded concurrently was in the late 1980s with the W87 and W88 and the ballistic missiles on which they are carried.

Based on the president’s budget request, the W80-4 LEP budget would increase in fiscal year 2016. The systems integration element of the program expects staffing to increase next year and again the following year, which Spence said requires accelerated hiring in multiple fields from engineering to computer modeling and simulation. “We will develop the next generation of weapon scientists and engineers and give them hands-on experience in a system development and integration program,” he said.

After nuclear testing ended in 1992, the U.S. began extending the life of existing warheads rather than developing new ones for the stockpile. Because many of those on the W80-4 team have been at Sandia for less than a decade, they are working with more experienced staff on the warhead program. The program also is taking advantage of experience gained in other ongoing life extension programs at Sandia.

The W80-4 LEP requires Sandia to coordinate development work with the B61-12 LEP, the W88 ALT (Alteration) 370 and the Mark 21 Fuze Replacement programs. The four programs will share the labs’ resources, everything from microchip fabrication at the Microsystems and Engineering Sciences Applications complex to computational simulations to large-scale testing at Sandia’s major environmental test facilities.

Originally, the W80-4 program was to begin producing weapons for the stockpile in 2027, but this year that milestone was moved up to 2025. “The schedule has been compressed and we have less time to do the development work we need to do, so that’s also going to be a challenge we will meet,” Spence said.

The W80-4 LEP is likely to become the largest weapons system development and integration effort at the California site in two decades. The W80 was originally developed by Los Alamos and Sandia, with the first units fielded in 1982.

“It’s exciting to have the program in the Livermore Valley. It’s important … to collaborate closely with Lawrence Livermore and production agencies like the National Security Campus in Kansas City,” Spence said. “Sandia will also work with Pantex, Savannah River [Site] and others. There will be lots of interactions to build on and grow.”