ALBUQUERQUE, N.M. – Sandia National Laboratories recently completed the renovation of five large-scale test facilities that are crucial to ensuring the safety and reliability of the nation’s nuclear weapons systems. The work supports Sandia’s ongoing nuclear stockpile modernization work on the B61-12 and W88 Alt, assessments of current stockpile systems and test and analysis for broad national security customers. The renovation of two additional facilities was completed in 2005 during the first phase of the project. The two-phase $100 million project, which was completed ahead of schedule and under budget, renovated Sandia’s major environmental test facilities. 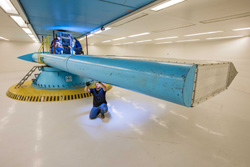 Sandia National Laboratories recently completed the renovation of five large-scale test facilities, including this Centrifuge, which are critical to Sandia’s stockpile stewardship and national security work. (Photo by Randy Montoya) Click on the thumbnail for a high-resolution image.

The second and final phase of the project, Test Capabilities Revitalization Phase 2, updated and rebuilt the 10,000-foot Rocket Sled Track, Mechanical Shock, Centrifuge, Vibro-Acoustic and Mass Properties and Aerosciences facilities. The $57.8 million effort was completed on time and the project team was able to return $4.5 million to the National Nuclear Security Administration (NNSA) to address other critical needs. TCR Phase 1, from 2001 to 2005, constructed a new world-class Thermal Test Complex and rebuilt the Aerial Cable Facility.

The facilities in Tech Area 3 are designed to conduct high-energy physical tests to simulate a variety of natural and induced environments and evaluate the performance of the nation’s nuclear weapons’ systems in these environments. Many of the facilities were built at the height of the Cold War and had not been updated in six decades. The project received funding through a congressional line item and Sandia completed the work with strong support from the NNSA’s Defense Programs and Acquisition and Project Management.

“These large-scale test facilities are a vital part of the process used to demonstrate that nuclear weapon components and systems withstand the extreme environments that the weapons encounter during transportation, launch, re-entry and impact,” said Dennis Miller, senior manager of Sandia’s Validation and Qualification Group. “The data we gather from these large-scale tests validate the computer models that are used to more fully understand and predict the performance of the weapon systems.” 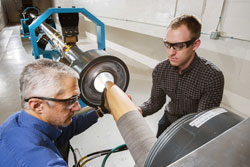 Despite nearly continuous construction, Sandia project manager Paul Schlavin and his small, dedicated team made sure that Tech Area 3 was never out of commission. While individual facilities were shut down due to construction, testing continued throughout the renovation. “We’re very pleased that we were able to work around the test schedules and revitalize these needed facilities without disrupting the testing,” Schlavin said. “There was a lot of work going on and a lot of people trying very hard and doing very good work for Sandia and for the nation.”

The Mechanical Shock Facility is Sandia’s oldest environmental test facility, and began operations in 1946, when Sandia was known as Z Division. The facility was moved in 1956 and houses a variety of test equipment to simulate impact scenarios. The construction team completely rebuilt the actuator and track system inside the existing building and added a six-inch bore gas gun, producing higher-quality and higher-speed shock tests to validate weapon components and subsystems.

The Rocket Sled Track offers a controlled environment for high-velocity impacts, aerodynamic and acceleration testing and other conditions. Over the years, it has tested parachutes, aircraft and space vehicles. Schlavin’s team completely rewired the power and data acquisition systems along the nearly two-mile track. The new system includes 25,000 connection points, provides much more information and enables more reliable and safer tests.

To test how an item performs during transportation, launch, flight and re-entry, the Vibro-Acoustics and Mass Properties facility provides vibration and shock environmental testing. The facility can be used to test everything from miniature components to full-scale assemblies, and vibration and acoustic tests can determine performance in response to controlled stimuli, define failure levels, prove system integrity, determine modes of vibration and verify theoretical models. The facility has been used to study satellite subsystems, rockets and payloads, re-entry vehicles, models, shipping configurations and items with hazardous materials.

The Aerosciences Test Capabilities facility, located in Tech Area 1, houses a Hypersonic Wind Tunnel, which is able to produce Mach 5, 8, or 14 flow past a model, and a Trisonic Wind Tunnel capable of producing flow velocities from Mach 0.5 to Mach 3. The facility supports Sandia research on fundamental aerospace physics, including characterization of vehicles and testing of flight components, and provides data to develop and validate computational models.