ALBUQUERQUE, N.M. — Sandia National Laboratories has finished eight days of testing a full-scale mock unit representing the aerodynamic characteristics of the B61-12 gravity bomb in a wind tunnel.

The tests on the mock-up were done to establish the configuration that will deliver the necessary spin motion of the bomb during freefall and are an important milestone in the Life Extension Program to deliver a new version of the aging system, the B61-12. 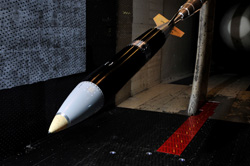 A B61-12 model awaits testing in a wind tunnel at the Arnold Engineering Development Center in Tennessee. Sandia National Laboratories completed a full-scale wind tunnel test of the B61-12 recently as part of a Life Extension Program. (Photo courtesy of the National Nuclear Security Administration) Click on the thumbnail for a high-resolution image.

The B61 must spin during flight — spin that is controlled by a combination of rocket motors and canted fins on the tail. Engineers determined from flight tests in the 1990s that plumes from the rocket motors worked against the fin performance, counteracting the torque from the motors and reducing the vehicle spin rate. Sandia engineers termed that phenomenon “counter torque.”

But data from a 2002 wind tunnel test to characterize counter torque were not fully applicable since the B61-12 uses a significantly different tail design than earlier versions. Engineers needed another series of wind tunnel tests to characterize counter torque on the new configuration to give them confidence the new system will meet the required spin environment in flight, said Vicki Ragsdale, a B61-12 technical basis test engineer at Sandia.

The complex test required a wind tunnel big enough for a full-size mock B61. Most wind tunnel tests use models smaller than the actual flight hardware, but the physics of the B61 rocket motors cannot be replicated on a reduced scale. Sandia turned to the Air Force’s Arnold Engineering and Development Center on Arnold Air Force Base in Tennessee, which has the nation’s largest wind tunnel capable of the required air speeds, as well as considerable experience in testing jet interactions similar to those on the B61. The 2002 test was conducted in the same wind tunnel.

The new test, which took three years to plan, was designed to explore the chaotic behavior of the counter torque and its implications for B61 aerodynamics.

When the data began rolling up on computer screens in the wind tunnel control room during February’s test, Sandia researchers were on hand to analyze the information immediately. They crunched numbers and debated physics for several days, and determined that the test had uncovered a previously uncharacterized physical phenomenon. Sandia researchers believe this arises uniquely because of the unusual shape of the rocket motors and from other features. The theory they had been using was based on a simpler configuration.

The Sandia team revised the remainder of the wind tunnel tests to provide fresh data to unravel the complex physics of the behavior observed at near-sonic flow conditions. The improved understanding will inform the design of the B61-12 and provide an additional technical basis for the well-characterized performance of the versions of the B61 in the current U.S. stockpile.

“We were able to come up with a theory for where this effect is coming from,” Ragsdale said.  “It’s not a wind tunnel effect and it is something we will see in flight, so we have to account for it.”