ALBUQUERQUE, N.M. – Sandia National Laboratories engineers have been studying the most effective ways to use solar photovoltaic (PV) arrays — a clean, affordable and renewable way to keep the power on. Systems are relatively easy to install and have relatively small maintenance costs. They begin working immediately and can run unassisted for decades. 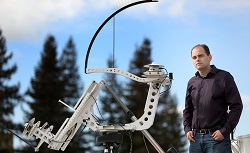 Sandia National Laboratories researcher Matt Lave uses pyranometers like these to measure the amount of irradiance, or available sunlight. There are four round pyranometers, capped by small glass domes, on this device. The work shows that the variability of a point sensor is larger than the variability of a photovoltaic power plant. (Photo by Dino Vournas) Click on the thumbnail for a high-resolution image.

But clouds could dim industry growth: What happens when they cover part of a solar PV array and cause a dip in output, how big is the dip and how can a utility company compensate for it? Sandia researcher Matt Lave has been working to understand that drawback and determine just how much clouds can affect solar power plant output. Typically, sunlight is measured using a single irradiance point sensor, which correlates nicely to a single PV panel. But that doesn’t translate to a large PV power plant. “If a cloud passes over, it might cover one panel, but other panels aren’t affected,” Lave said. “So if you use the single point sensor to represent the variability of the whole power plant, you will significantly overestimate the variability.”

To get a more accurate picture of how clouds affect PV power plants, Lave partnered with Sandia engineer Josh Stein and University of California, San Diego professor of environmental engineering Jan Kleissl to develop a Wavelet Variability Model. The model uses data from a point sensor and scales it up to accurately represent the entire power plant. The model uses measurements from an irradiance point sensor, the power plant footprint — the arrangement and number of PV modules in the plant — and the daily local cloud speed to estimate the output of a power plant.

In many cases, output measurements from the power plant aren’t available, but point sensor data is, so the model is useful for estimating how much energy must be stored to make up for cloud-caused fluctuations.

The variability is a concern for grid operators as unanticipated changes in PV plant output can strain the electric grid. At short timescales, measured in seconds, sharp changes in power output from a PV power plant can cause local voltage to flicker. At longer timescales, measured in minutes, generating less PV power than expected produces balancing and frequency issues, where load can exceed generation. Backup systems such as battery storage to mitigate the variability can substantially add to the cost of a PV power plant.

Lave points to Puerto Rico, where changes in power output are required to be less than 10 percent per minute. “With this tool, you can estimate how often you’ll exceed that limit and determine how to mitigate those effects,” he said.

This work is supported by the Department of Energy’s SunShot Initiative, a national effort to make solar energy cost-competitive with traditional sources of energy by 2020 and greatly increase how much solar energy safely and cost-effectively goes to the electric grid. By helping grid operators solve variable short-term power generation problems, Lave said utilities will likely be more comfortable from a technical perspective with increases in the relative percentage of solar in their energy portfolios.

“It is important to accurately scale solar variability to ensure accurate grid integration studies and PV plant evaluations. Having a solid understanding of the effect of PV plant variability will encourage PV installations while helping to maintain a safe electric grid.” Lave said.