ALBUQUERQUE, N.M. — Yasuyuki Kaneko left his wife and two small children at the end of April to fly from the northern Japanese city of Sapporo to Albuquerque. He stayed overnight at a small hotel a few blocks from the airport. The next morning, Kaneko — a Sapporo city councilor — took the final step of his mission when he was escorted into the building housing Sandia National Laboratories’ Z machine, viewed by the overwhelming majority of Kaneko’s elected colleagues as the heart of darkness. 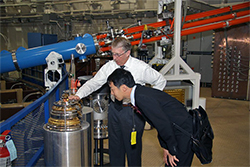 Z — the most powerful laboratory producer of X-rays on Earth — regularly examines plutonium to study the fissile material’s properties. The large accelerator has done this eight times in the last three years. The U.S. government’s view is that tests of a few grams of plutonium are ecologically responsible, safe and don’t violate the U.S. unofficial moratorium on nuclear testing that’s been in effect for more than two decades.

But each firing is widely reported in Japan, Kaneko said in an interview, and the reports motivate councilors in hundreds of Japanese cities to write letters of protest to President Barack Obama. The Hiroshima Peace Memorial Museum resets its “Peace Watch Tower” clock to zero after each Z shot. The reset indicates the amount of time since the last global nuclear weapons test.

However, Kaneko doubted the danger widely perceived by his countrymen.

“I’ve read your website,” he said, “and I’m convinced the experiments are not dangerous.”

But millions of Japanese “think it’s a big explosion [when Z fires],” he said.

So, he said, “I have come here to see why you do your experiment with all my eyes.”

He came alone because no other Sapporo councilors wanted to come. Of his city’s 68 council members, he said, only three opposed sending letters to the American president. The other two dissenters, several decades older than the 42-year-old Kaneko, were reluctant to undertake the lengthy journey.

Sandia Pulsed Power Sciences Center director Keith Matzen, asked by the National Nuclear Security Administration to host the hour-long tour, answered Kaneko’s question of how much plutonium was involved in a Z test shot by pulling a nickel from his pocket. “The amount of plutonium used is less than the size of this coin,” he said.

Kaneko, who has little scientific background (he majored in college in economics and law), had no trouble understanding the coin comparison. He said later, “The amount is much smaller than I expected. It is not dangerous because I can touch the container in the facility. Also, they do experiments there every day [so it’s not a bomb site].”

Given that he held a favorable position toward Z before he came to Sandia, would his first-hand report be greeted by skepticism at home?

“The truth is most powerful to convince someone,” Kaneko said.

The Z machine is a contender to produce break-even nuclear fusion power in the laboratory. Break-even —  harvesting as much energy from a reaction as put into it — is the next major fusion goal and would be a step in achieving virtually unlimited energy from sea water.