Most Promising Engineer of the Year honor goes to Sandia scientist 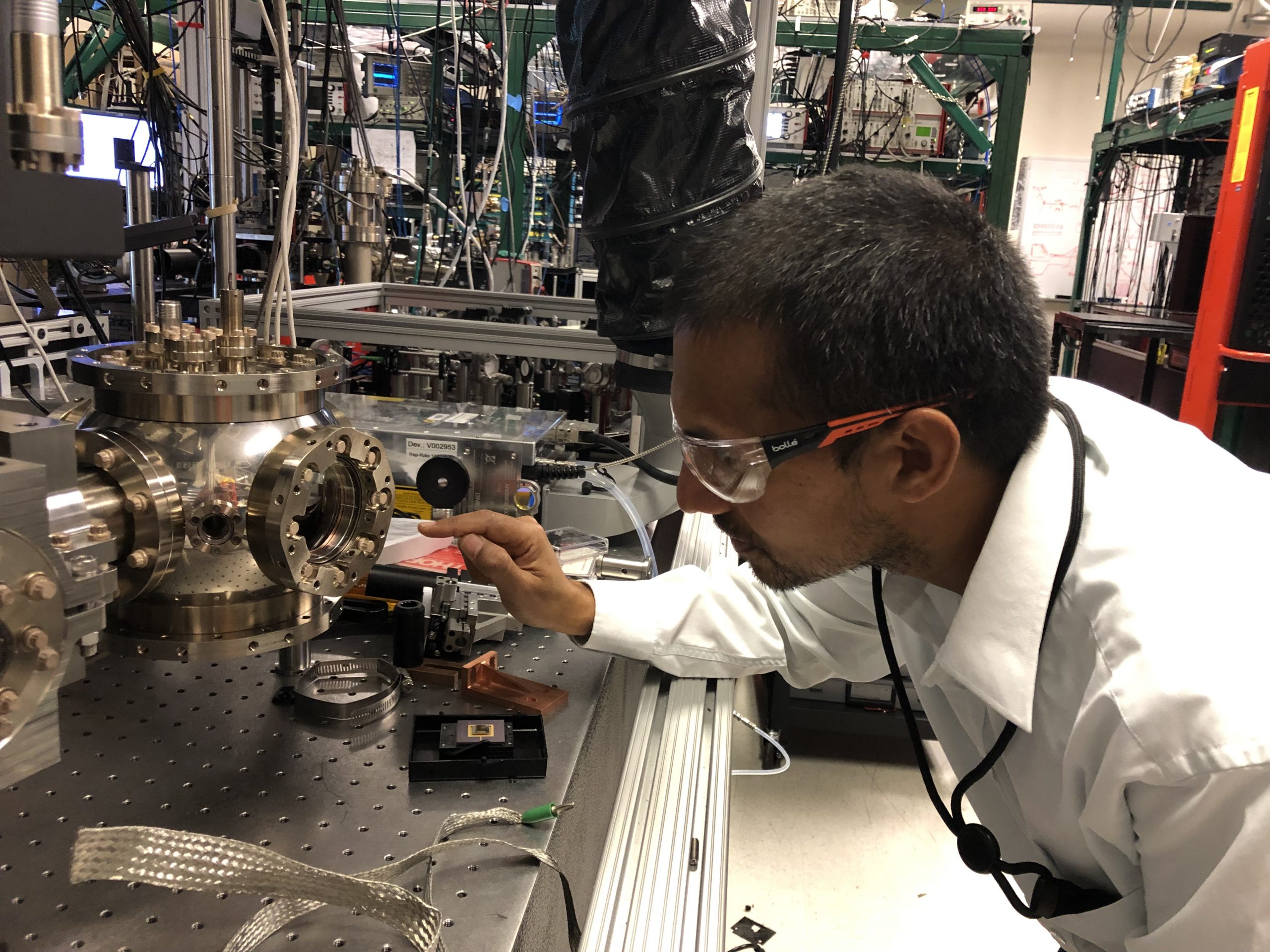 ALBUQUERQUE, N.M. — Sandia National Laboratories research and development manager Bishnu Khanal was recently honored with the Most Promising Asian American Engineer of the Year award for his work in next-generation optical lithography process development for numerous technologies, along with his deep-reaching community service. 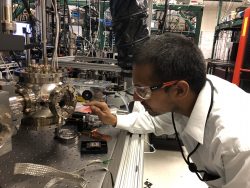 Bishnu Khanal, working on an ion trapping system to trap ions for the quantum computer device at Sandia National Laboratories. (Photo by Melissa Revelle) Click on the thumbnail for a high-resolution image.

According to Asian American Engineer of the Year, Khanal was selected for his technical leadership and contributions in nanotechnology, semiconductor device fabrication and materials science.

“This recognition means a lot to me, and I’m so proud to be part of it,” Khanal said. “Coming from a remote village in Nepal, ending up at Sandia Labs and then receiving this award is truly my honor.”

The Himalayans thrust skyward where Nepal, China and India meet. At the base of this rugged range lies the small village of Gulariya in western Nepal where Khanal grew up. He describes his life there as primitive. “It was and still is a very simple agrarian way of life, where crops and livestock goods are sold in a central market,” he said. “That’s the community focus. My parents never attended school and my mom still uses currency based on color, size and weight.”

Despite his limited educational opportunities, Khanal’s parents enthusiastically encouraged his schooling at every level. “Our shared classroom growing up was under a big tree, and if the weather was bad, we didn’t have lessons,” he said. “They made sure I attended every day that classes were held and that I completed all of my lessons.”

Through his basic studies, Khanal became interested in science and math and the problem-solving methodologies that came with them. His high school math and science teachers, Shambhu Gautam and Bijay Mishra, recognized Khanal’s potential and began structuring his assignments accordingly, thus encouraging his problem-solving abilities. “They helped build my interest and fundamental understanding of science and math,” he said.

His educational path seems serendipitous. “I had no big dream or grand plans when I enrolled in college in Nepal, but I really started enjoying chemistry and then organic chemistry,” Khanal said. “I thought about eventually teaching. That’s all I knew. I really had no notion of what else was out there.”

“I didn’t know what came after earning my master’s, but a Ph.D. seemed like the next step,” Khanal said. “Honestly, I never thought, ‘I’m going to get my Ph.D. and work in a national laboratory in the U.S.’ I didn’t know such opportunity existed.”

Khanal spent the next couple of years as an undergraduate and graduate chemistry lecturer at various colleges in Kathmandu, Nepal. In 2005, he applied and was accepted by Rice University in Houston, Texas, to pursue his doctorate in chemistry and nanotechnology. There, he excelled in nanomaterials and nanotechnology research, garnering national awards and fellowships. He also was named a visiting graduate student at Massachusetts Institute of Technology. Bishnu was hitting his stride.

He joined Los Alamos National Laboratory in 2009 for his post-doctoral research on synthesis and spectroscopic study of semiconductor quantum dots and quantum rods. While at Los Alamos, Khanal was selected as a director’s postdoctoral fellow for his outstanding research proposals and achievements.

The recipient of several academic and professional awards, Khanal was widely considered a rising star in his field and, again, on the move.

Settling in at Sandia 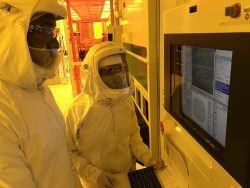 Bishnu Khanal (right) and Kel Okoro examine the quality of microelectronic devices on an electron microscope that he patterned using advanced optical lithography at Sandia National Laboratories. (Photo by Philip Shapiro) Click on the thumbnail for a high-resolution image.

Khanal also is a key member of numerous programs focusing on microelectronics and micro-electromechanical system development. He leads several fundamental science research projects in nanotechnology in collaboration with other scientists inside and outside of Sandia.

In 2022, Khanal was selected to lead the Materials Mechanics and Tribology department as a research and development manager. He leads a diverse team of scientists, engineers, post-doctoral researchers, students and technologists working on developing a fundamental understanding of mechanical behavior of materials and operationalizing this understanding to resolve engineering challenges.

Khanal has found professional energy in managing his team toward its mission goals. “There’s something rewarding in stepping outside of problem-solving on my own,” he said. “Now our entire team is solving problems together and that’s even more exciting and brings a higher impact to our national security mission.”

His many accomplishments aside, Asian American Engineer of the Year also selected Khanal for the award based on his public service efforts. Khanal is establishing a trust with his personal funds in his parents’ names to support underprivileged students in his Nepal village. “We’ll have set criteria for selecting students in a local public school to help provide things like school supplies and clothes — things that I needed growing up,” he said. “We are targeting three to five students a year.”

Khanal also serves his local Albuquerque community, volunteering in schools for kids’ fundraising fun runs and as a science fair judge. And he mentors New Mexico high school students for a two-week summer residential science, technology, engineering and mathematics program. “Some kids just need that little extra support, like I did,” he said. “Who knows what they can grow up to accomplish?”

About Asian American Engineer of the Year

The Asian American Engineer of the Year award is an annual national event that honors the most distinguished professionals and their leadership, technical achievements and remarkable public services. Asian American Engineer of the Year was first introduced in 2002 as a part of the National Engineers Week (DiscoverE) Program and has since become a prestigious and important forum for corporate America, academia and government entities in promoting STEM activities. Past awardees included Nobel Laureates, academia, key corporate executives and astronauts.