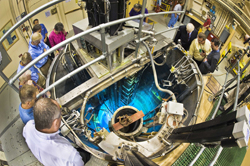 A group of spectators gathers at the ACRR for its 10,000th operation. The shot was videostreamed live to a nearby auditorium to accommodate more than 150 onlookers. The ACRR has been in operation for more than 32 years at Sandia. (Photo by Randy Montoya) Click on the thumbnail for a high-resolution image.

“The ACRR has been a real workhorse for Sandia, and labs leadership and the nation rely on these experiments and other weapons component testing done at Sandia to support certification of the nuclear weapon stockpile,” said Lonnie Martin, an ACRR operator.

In its 32-year history, the ACRR time and again has proved itself a valuable resource for a wide variety of experiments in nearly every branch of nuclear science, especially the testing of radiation-hardened electronic components.

With a dry, 9-inch diameter cavity in the core’s center, and a 20-inch diameter external cavity, the ACRR subjects electronics to high-intensity neutron irradiation and conducts reactor safety research. The ACRR also has done testing for semiconductor manufacturers, NASA, the Large Hadron Collider in Switzerland and dozens of other users.

Sandia’s ACRR is a water-moderated, pool-type research reactor capable of steady-state, pulsed and tailored transient operations and, in the past, has been configured for medical isotope production. Other duties for ACRR include: reactor-driven laser experiments; space reactor fuels development; pulse reactor kinetics; reactor heat transfer and fluid flow; electronic component hardening; and explosive component testing. It is also routinely used for education and training programs. 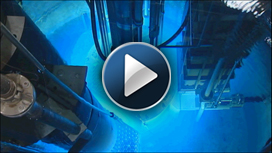 At peak power in its steady state mode, the ACRR produces up to four megawatts of power. But during a maximum pulse, it generates a whopping 35,000 megawatts of power for seven milliseconds. Nuclear engineer and former University of New Mexico professor Ron Knief compares its power output to that of the Palo Verde Nuclear Generating Station, outside of Phoenix. “For that very short time, we produce three times more power than the nation’s largest nuclear power station. They have three big reactors, and yet, for a fraction of a second, we produce three times more power than they do,” Knief said.

The ACRR is a descendent of the Sandia Annular Core Pulse Reactor (ACPR), which was replaced in 1978 and is part of a large family of Training, Research Isotope Production, General Atomics (TRIGA) reactors. The TRIGA concept is credited to Manhattan Project physicist Edward Teller and a group of distinguished scientists who assembled the first model in a “Little Red Schoolhouse” in San Diego in 1956. Teller’s mandate to the team was to “design a reactor so safe … that if it was started from its shut-down condition and all its control rods instantaneously removed, it would settle down to a steady level of operation without melting any of its fuel,” according to Freeman Dyson’s, “Disturbing the Universe.” Essentially, even if all the engineered safety mechanisms failed, the reactor would operate safely, based on the laws of physics.

In 1978, the original ACPR TRIGA fuel was replaced with a new ACRR ceramic-metal, uranium dioxide/beryllium oxide (UO2/BeO) fuel, which is designed to allow steady state and pulsed operation at fuel temperatures up to 2,552 degrees (1,400 degrees C). The reactor underwent extensive upgrades in 2002, including upgrades to reactivity control circuitry.