Aerospace test at Sandia goes green with alternative to explosives

ALBUQUERQUE, N.M. — Sandia National Laboratories has successfully demonstrated a new, more environmentally friendly method to test a rocket part to ensure its avionics can withstand the shock from stage separation during flight.

The new method — called the Alternative Pyroshock Test — used a nitrogen-powered gas gun to shoot a 100-pound steel projectile into a steel resonant beam, which then transfers energy through a resonant cone attached to the part being tested. The resulting energy transfer mimics the conditions of stage separation in space. The first test of this type using the flight hardware was completed this spring. 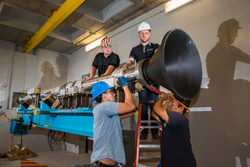 Sandia National Laboratories’ Mike Beabout and Patrick Barnes, left to right top, and Mark Stroman and Jamison Lee, left to right bottom, prepare a nitrogen-powered gas gun for the labs’ Alternative Pyroshock Test by installing a resonant cone to a resonant beam. Sandia successfully demonstrated a more environmentally friendly way to ensure avionics can withstand the shock from stage separation during flight. (Photo by Randy Montoya) Click on the thumbnail for a high-resolution image.

Until now, pyroshock tests to ensure aerospace parts were ready for the rigors of flight had used explosives encased in lead to provide the impacts to parts needed for such experiments, mechanical engineer Mark Pilcher said.

The lead and explosives were environmental hazards, so cleanup was costly and time-consuming. The Sandia Labs team wanted a better approach.

“We recognized early in the program that we need to seek out alternative test methods in order to reduce our hazardous work exposure, minimize environmental waste and develop a controlled and repeatable test capability,” Pilcher said. “Investigating a large-scale nonexplosive gas gun test became a reality when we partnered with Sandia’s large-scale mechanical test facilities. The combined team worked hard to get to this test.”

Asked to research whether an alternative means of testing was possible using a gas gun, Sandia  mechanical engineer Bo Song turned to a 1-inch-diameter Hopkinson bar. The Hopkinson bar was first suggested in 1914 by Bertram Hopkinson, a British patent lawyer and Cambridge University professor of mechanism and applied mechanics, as a way to measure the pressure produced by explosives. It was further modified in 1949 for dynamic stress-strain measurements of materials.

In Sandia’s Experimental Impact Mechanics Laboratory, Song and his team conducted small-scale testing with a metal rod about 20 times smaller than that used in the full-scale test. They discovered the Hopkinson bar technology could provide the frequency levels and the mechanical energy needed in the large-scale test to recreate conditions found during flight.

Song’s team conducted more than 50 tests. They looked at what types of projectiles to use, how fast the gas gun needed to shoot, how to design a Hopkinson bar-type apparatus called a resonant bar at a larger scale, how to design a steel resonant cone to transfer the energy to the object being tested and how to manipulate the pulse of energy using small copper “coins” called programmers or pulse shapers, which were placed on the surface of the resonant bar.

“The most difficult part was designing the programmers, or pulse shapers, because we had to select the right material, geometry and dimensions,” Song said. “We got a lot of experience through this kind of testing for the future large-scale testing. The same concept can be used for a variety of defense and space applications. This provides a new path for pyroshock testing, but very clean and more controllable and will save a lot of costs.” 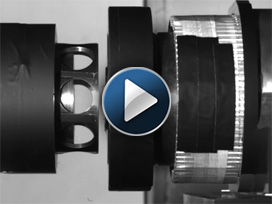 A 100-lb solid steel projectile, fired from Sandia National Laboratories’ 6-inch gas gun, impacts material on a resonant bar attached to a test article. The impact initiates a wave that travels through the resonant bar assembly into the test article, simulating a stage separation pyroshock event. Watch the video on Sandia’s YouTube channel.

The next phase of the Alternative Pyroshock Test applied the Hopkinson bar technology to a pneumatically driven gas gun.

For this test, the gas gun was not required to reach its maximum capacities. The 60-foot-long gas gun used compressed nitrogen gas to shoot metal projectiles into a resonant beam coupled with a resonant cone to expand the final diameter to interface with the rocket part, essentially a hybrid version of a large-scale Hopkinson bar.

“What’s novel is the application of the Hopkinson bar,” said mechanical engineer Patrick Barnes. “Typically the bar and test objects are really small, but in our case, we used a 1,500-pound, 8-foot-long, 8-inch diameter bar.”

Like a musical tuning fork, the resonant bar and the resonant cone needed to vibrate at certain frequencies to apply the right amount of energy to the test object, Barnes said.

Ahead of the final tests, Barnes’ team used an empty mock test object outfitted with accelerometers to measure the impact. Barnes changed the geometry and composition of the programmers to simulate the test conditions required for the program.

Now that Sandia has put in analysis and testing, future tests of this sort should require less development and cost less. “Ideally, we can create a repeatable environment, something we can dial in, so if they need to do this test again in the future, we can build this back up and start testing,” Barnes said.