ALBUQUERQUE, N.M. — A long-standing but unproven assumption about the X-ray spectra of black holes in space has been contradicted by hands-on experiments performed at Sandia National Laboratories’ Z machine.

Z, the most energetic laboratory X-ray source on Earth, can duplicate the X-rays surrounding black holes that otherwise can be watched only from a great distance and then theorized about.

“Of course, emission directly from black holes cannot be observed,” said Sandia researcher and lead author Guillaume Loisel, lead author for a paper on the experimental results, published in August in Physical Review Letters. “We see emission from surrounding matter just before it is consumed by the black hole. This surrounding matter is forced into the shape of a disk, called an accretion disk.”

The results suggest revisions are needed to models previously used to interpret emissions from matter just before it is consumed by black holes, and also the related rate of growth of mass within the black holes. A black hole is a region of outer space from which no material and no radiation (that is, X-rays, visible light, and so on) can escape because the gravitational field of the black hole is so intense.

“Our research suggests it will be necessary to rework many scientific papers published over the last 20 years,” Loisel said. “Our results challenge models used to infer how fast black holes swallow matter from their companion star. We are optimistic that astrophysicists will implement whatever changes are found to be needed.” 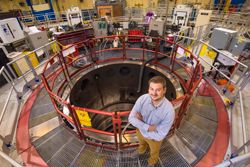 Sandia National Laboratories’ Guillaume Loisel poses with Sandia’s Z machine, where hands-on experiments contradicted a long-standing assumption about the X-ray spectra from the vicinity of black holes in space. Loisel is the lead author of a paper on the experimental results, published in Physical Review Letters. (Photo by Randy Montoya) Click on the thumbnail for a high-resolution image.

Most researchers agree a great way to learn about black holes is to use satellite-based instruments to collect X-ray spectra, said Sandia co-author Jim Bailey. “The catch is that the plasmas that emit the X-rays are exotic, and models used to interpret their spectra have never been tested in the laboratory till now,” he said.

NASA astrophysicist Tim Kallman, one of the co-authors, said, “The Sandia experiment is exciting because it’s the closest anyone has ever come to creating an environment that’s a re-creation of what’s going on near a black hole.”

The divergence between theory and reality began 20 years ago, when physicists declared that certain ionization stages of iron (or ions) were present in a black hole’s accretion disk — the matter surrounding a black hole — even when no spectral lines indicated their existence.

The complicated theoretical explanation was that under a black hole’s immense gravity and intense radiation, highly energized iron electrons did not drop back to lower energy states by emitting photons — the common quantum explanation of why energized materials emit light. Instead, the electrons were liberated from their atoms and slunk off as lone wolves in relative darkness. The general process is known as Auger decay, after the French physicist who discovered it in the early 20th century. The absence of photons in the black-hole case is termed Auger destruction, or more formally, the Resonant Auger Destruction assumption.

However, Z researchers, by duplicating X-ray energies surrounding black holes and applying them to a dime-size film of silicon at the proper densities, showed that if no photons appear, then the generating element simply isn’t there. Silicon is an abundant element in the universe and experiences the Auger effect more frequently than iron. Therefore, if Resonant Auger Destruction happens in iron then it should happen in silicon too.

“If Resonant Auger Destruction is a factor, it should have happened in our experiment because we had the same conditions, the same column density, the same temperature,” said Loisel. “Our results show that if the photons aren’t there, the ions must be not there either.”

That deceptively simple finding, after five years of experiments, calls into question the many astrophysical papers based on the Resonant Auger Destruction assumption.

The Z experiment mimicked the conditions found in accretion disks surrounding black holes, which have densities many orders of magnitude lower than Earth’s atmosphere.

“Even though black holes are extremely compact objects, their accretion disks ­— the large plasmas in space that surround them — are relatively diffuse,” said Loisel. “On Z, we expanded silicon 50,000 times. It’s very low density, five orders of magnitude lower than solid silicon.” 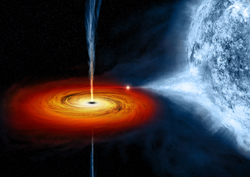 This is an artist’s depiction of the black hole named Cygnus X-1, formed when the large blue star beside it collapsed into the smaller, extremely dense matter. (Image courtesy of NASA) Click on the thumbnail for a high-resolution image.

The reason accurate theories of a black hole’s size and properties are difficult to come by is the lack of first-hand observations. Black holes were mentioned in Albert Einstein’s general relativity theory a century ago but at first were considered a purely mathematical concept. Later, astronomers observed the altered movements of stars on gravitational tethers as they circled their black hole, or most recently, gravity-wave signals, also predicted by Einstein, from the collisions of those black holes. But most of these remarkable entities are relatively small — about 1/10 the distance from the Earth to the Sun — and many thousands of light years away. Their relatively tiny sizes at immense distances make it impossible to image them with the best of NASA’s billion-dollar telescopes.

What’s observable are the spectra released by elements in the black hole’s accretion disk, which then feeds material into the black hole. “There’s lots of information in spectra. They can have many shapes,” said NASA’s Kallman. “Incandescent light bulb spectra are boring, they have peaks in the yellow part of their spectra. The black holes are more interesting, with bumps and wiggles in different parts of the spectra. If you can interpret those bumps and wiggles, you know how much gas, how hot, how ionized and to what extent, and how many different elements are present in the accretion disk.”

Said Loisel: “If we could go to the black hole and take a scoop of the accretion disk and analyze it in the lab, that would be the most useful way to know what the accretion disk is made of. But since we cannot do that, we try to provide tested data for astrophysical models.”

While Loisel is ready to say R.I.P. to the Resonant Auger Destruction assumption, he still is aware the implications of higher black hole mass consumption, in this case of the absent iron, is only one of several possibilities.

“Another implication could be that lines from the highly charged iron ions are present, but the lines have been misidentified so far. This is because black holes shift spectral lines tremendously due to the fact that photons have a hard time escaping the intense gravitation field,” he said.

There are now models being constructed elsewhere for accretion-powered objects that don’t employ the Resonant Auger Destruction approximation. “These models are necessarily complicated, and therefore it is even more important to test their assumptions with laboratory experiments,” Loisel said.

The work is supported by the U.S. Department of Energy and the National Nuclear Security Administration.