Modular units crossing “Valley of Death” for Air Force use

ALBUQUERQUE, N.M. — If a nuclear device were to unexpectedly detonate anywhere on Earth, the ensuing effort to find out who made the weapon probably would be led by aircraft rapidly collecting airborne radioactive particles for  analysis. 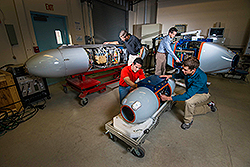 Sandia National Laboratories researchers prepare pods that, airborne, will track radiation to its source and analyze particulates and gases to identify a nuclear bomb's origins. (Photo by Randy Montoya). Click on the thumbnail for a high-resolution image.

Relatively inexpensive unmanned aerial vehicles (UAVs) — equipped with radiation sensors and specialized debris-samplers — could fly right down the throat of telltale radiation over a broad range of altitudes without exposing a human crew to hazards.

A Sandia National Laboratories-developed airborne particulate-collection system demonstrated those kinds of capabilities in the blue skies above Grand Forks Air Force Base in Grand Forks, N.D., in late September. Dubbed “Harvester” for obvious reasons, the system “tasted” the atmosphere with two particulate sampling pods. A third pod would provide directional guidance for a real event by following the trail of gamma radiation.

The three pods, with additional hardware, software and ground-control equipment, are expected take their place on aircraft in the Air Force’s investigatory arsenal in the next few years.

When they do so, they will have traversed the infamous technological “Valley of Death,” in which many promising researched and developed ideas die before reaching production.

The successful Grand Forks demonstration was part of a formal Department of Defense (DoD) Joint Capability Technology Demonstration (JCTD) that mated the Harvester modular pods to the long wings of a Department of Homeland Security Customs and Border Protection-provided MQ-9 Reaper UAV. (The Reaper is a more powerful cousin of the better-known Predator.) 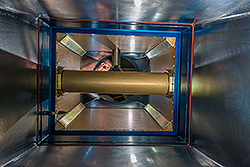 A researcher checks air flow in the Harvester particulate sampling pod. (Photo by Randy Montoya.) Click on the thumbnail for a high -resolution image.

While the tests did not include any radioisotope releases, the pods were able to collect and identify naturally occurring radioisotopes of lead and bismuth produced from the radioactive decay of atmospheric radon. In addition, radioactive beryllium-7 produced from cosmic ray-induced break-up (spallation) of naturally occurring carbon-14, also showed up on the filters, providing a uniform measure for debris distribution.

The modular pods eliminate the need for costly, permanent aircraft modifications that would limit the number of aircraft platforms on which Harvester can be flown.

“There’s a high likelihood the Air Force will make Harvester operational in 2014 to augment its current manned aircraft collection capability,” said Sandia project lead Joe Sanders. “For maximum responsiveness, we continually engaged with the Air Force to address its technological and operational needs throughout the project.”

“The operator will see a vector that shows peak plume intensity up and to the right, let’s say,” Sanders said. “It’s the equivalent of a guide saying, ‘You’re getting warmer.’”

Air passes through the samplers, each about the size of a small snowmobile, as the Reaper cruises at 200 mph. This rams particles into filter paper like light hitting a photographic plate, causing the particles to stick to the filter fibers. A separate radiation sensor analyzes the filter in real time to estimate the type and quantity of radioactive particles collected. More extensive examination of the filters occurs after the aircraft has landed. 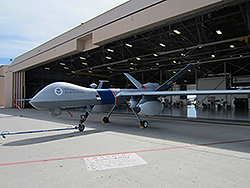 The radiation sensor (smaller pod) and Harvester sampling pods ready for a UAV test flight at a U.S. air base. (Photo by Joe Sanders) Click on the thumbnail for a high-resolution image.

Because gas analysis can complement particle analysis, Sandia is developing a third type of pod called the Whole Air Sampling Pod (WASP) to demonstrate the feasibility of collecting multiple, large-volume air samples that can be analyzed for radioactive gases. Radioxenons, radioisotopes of the noble gas xenon, if detected, can provide a tell-tale indication of a nuclear detonation.

“While not small, the 9-foot-long, 650-pound WASP is designed to be compatible with an MQ-9 Reaper UAV,” Sanders said. “WASP has not yet been flight-tested but has performed well in the laboratory, and the DoD’s interest in modular gas sampling is growing. We look forward to demonstrating the WASP technology, and expect that it will also cross the Valley of Death.”

Harvester was developed by Sandia with support from the Albuquerque office of National Technical Systems, an international engineering firm. The early research and development phase was funded by the National Nuclear Security Administration’s Office of Nonproliferation Research and Development. The later development and qualification phase was funded by the Defense Threat Reduction Agency and the Office of the Secretary of Defense’s Acquisition, Technology and Logistics Rapid Fielding Office as part of the JCTD.