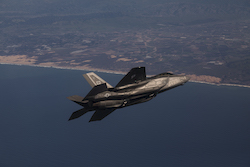 Sandia National Laboratories developed virtual means to pull off a B61-12 Life Extension Program test flight completed by this F-35A jet fighter. The test took place earlier this year at Edwards Air Force Base. This photo is from a previous flight. (Photo courtesy of Lockheed Martin) Click on the thumbnail for a high-resolution image.

The flight test at Edwards Air Force Base in the California desert took place in April and was needed to validate software and firmware changes in preparation for future development and flight tests, said Sandia manager Dan Brown. Attached to the F-35A was a non-weaponized Compatibility Test Unit, which simulates a weapon’s functionality before release and captures data for later analysis without being dropped from the plane.

Sandia is the design and engineering lab for non-nuclear components of the nation’s nuclear stockpile and has weapon system integration responsibility. Flight tests, like with the Air Force’s F-35A Lightning II, are an essential part of the B61-12 Life Extension Program to refurbish, reuse or replace all components; extend the bomb’s service life by at least 20 years; and improve its safety, security and effectiveness.

Because of the coronavirus pandemic, the flight test almost didn’t happen. Sandia developed virtual methods to keep things on track at the request of the Air Force’s F-35 Program Office, Brown said.

“Given the travel limits at the beginning of the pandemic, we had to come up with nontraditional, out-of-the-box ways to fulfill our mission,” he said. “We were able to come up with a way to mitigate the risk of COVID-19 to the health and wellbeing of our team and others involved in the test. With the virtual setup, there was less of an opportunity for anybody to get sick and a greater opportunity for success.”

As the COVID-19 pandemic grew, the F-35A teams were concerned the flight test might be postponed. Delays to the test could push back other schedules and possibly have budgetary impacts and other ramifications across the Nuclear Security Enterprise. With NNSA’s approval, the teams immediately got to work on finding a solution.

Travel restrictions due to COVID-19 and a 14-day quarantine requirement before visitors could enter Edwards Air Force Base complicated Sandia’s need to be onsite during the flight test. Typically, Sandia personnel prepare and oversee the use of the Compatibility Test Unit while on-site. The team also conducts post-flight information downloads and reviews at the base.

There were two alternatives considered. The first option involved quarantining a Sandia team member at home and securing a direct flight from Kirtland Air Force Base to Edwards. However, traveling between states could still increase the risk of COVID-19 exposure and would have been extremely costly in terms of the dedicated flight between the bases. 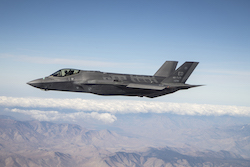 This F-35A jet fighter carried a non-weaponized test unit as part of a B61-12 Life Extension Program test flight successfully completed earlier this year through virtual means established by Sandia National Laboratories to confront COVID-19 pandemic challenges. This photo is from a previous flight. (Photo courtesy of Lockheed Martin) Click on the thumbnail for a high-resolution image.

The teams went with the second option: asking for an exception to on-site requirements, conducting virtual training of the Edwards F-35 team and allowing Sandia participation through virtual means. This option left the possibility that damage to equipment or the ability to conduct troubleshooting of the B61-12 test unit would be unaddressed.

Virtual training by Sandia engineers enabled the Edwards team to prepare and validate the safety and readiness for flight of the Sandia’s B61-12 test unit, Brown said.

“It’s a solid relationship we’ve built over several years. The team at Edwards has a lot of experience, which greatly facilitated our ability to pull off the test,” he said.

Sandia developed new electronic training materials, and training activities were completed on April 20. The Edwards team said it was ready for the mission. Three days later, the day of the original scheduled flight test, Sandia had created and delivered electronic procedures and a video demonstration to enable post-flight data download and delivery to the labs.

“We virtually walked the team at Edwards through how to power on the data recorder in the Compatibility Test Unit and then how to download the data and send it to Sandia for analysis,” Brown said. “We were able to show them how our specific hardware worked.”

On April 24, with Sandia personnel on virtual standby to assist, the F-35 Captive Carry Flight Test No. 6 with a B61-12 Compatibility Test Unit onboard successfully completed its mission without issues.

The success of this flight test, despite the constraints associated with the COVID-19 pandemic, demonstrated Sandia’s clear passion for mission success, Brown said. “Successfully completing the flight test shows how we were able to balance the health and safety needs of team members with meeting the needs of our nuclear deterrence mission, in this case by keeping the F-35 program moving forward.”