“We’ve Got the Power”: Sandia technology test delivers electricity to the grid 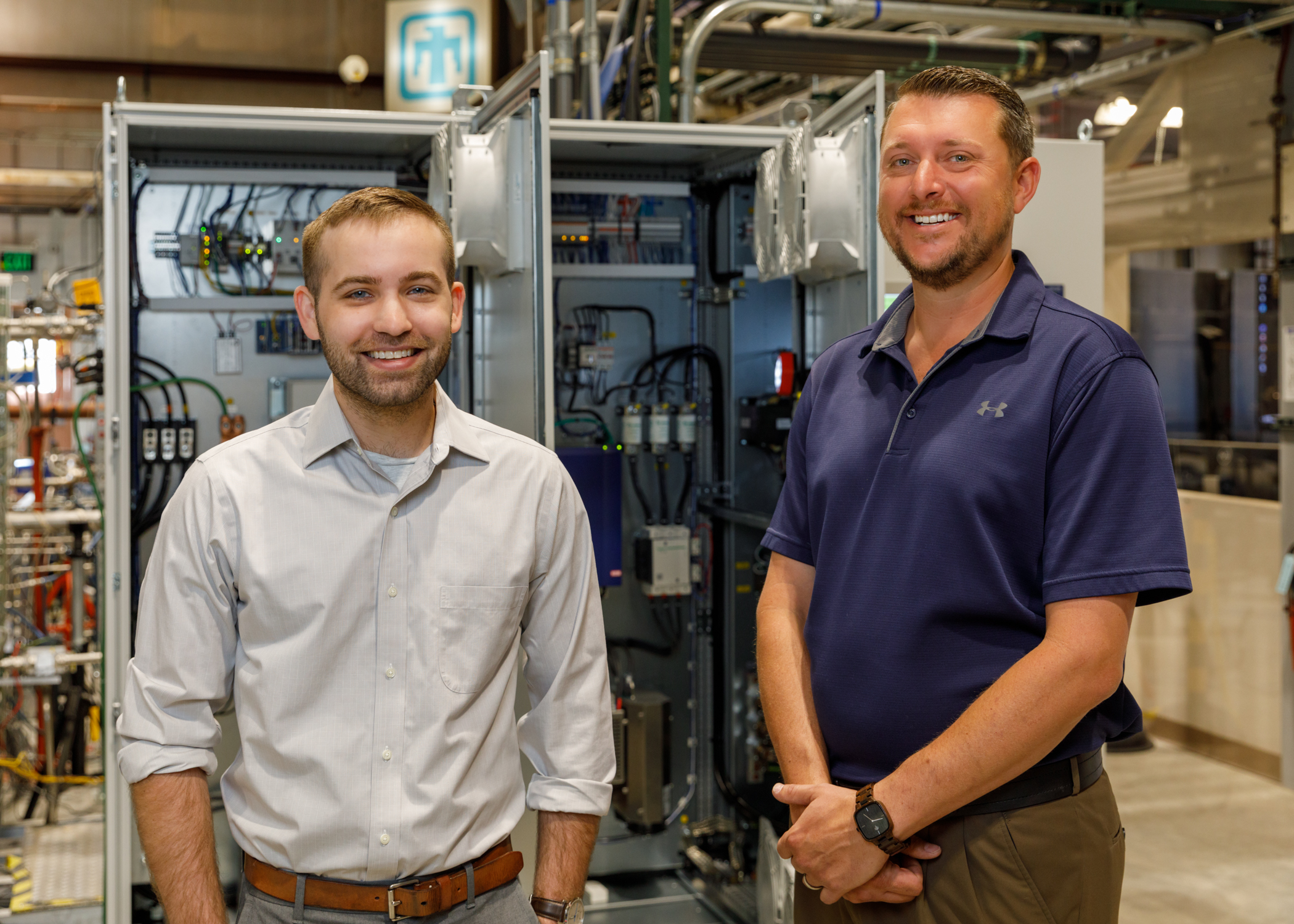 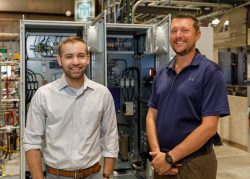 Logan Rapp (left) and Darryn Fleming, Sandia National Laboratories mechanical engineers, stand with the control system for the supercritical carbon dioxide Brayton cycle test loop. Earlier this year, the engineers delivered electricity produced by this system to the grid for the first time. (Photo by Bret Latter) Click on the thumbnail for a high-resolution image.

The system uses heated supercritical carbon dioxide instead of steam to generate electricity and is based on a closed-loop Brayton cycle. The Brayton cycle is named after 19th century engineer George Brayton, who developed this method of using hot, pressurized fluid to spin a turbine, much like a jet engine.

Supercritical carbon dioxide is a non-toxic, stable material that is under so much pressure it acts like both a liquid and a gas. This carbon dioxide, which stays within the system and is not released as a greenhouse gas, can get much hotter than steam — 1,290 degrees Fahrenheit or 700 Celsius. Partially because of this heat, the Brayton cycle has the potential to be much more efficient at turning heat from power plants — nuclear, natural gas or even concentrated solar — into energy than the traditional steam-based Rankine cycle. Because so much energy is lost turning steam back into water in the Rankine cycle, at most a third of the power in the steam can be converted into electricity. In comparison, the Brayton cycle has a theoretical conversion efficiency upwards of 50 percent.

“We’ve been striving to get here for a number of years, and to be able to demonstrate that we can connect our system through a commercial device to the grid is the first bridge to more efficient electricity generation,” said Rodney Keith, manager for the advanced concepts group working on the Brayton cycle technology. “Maybe it’s just a pontoon bridge, but it’s definitely a bridge. It may not sound super significant, but it was quite a path to get here. Now that we can get across the river, we can get a lot more going.”

Getting power to the grid

On April 12, the Sandia engineering team heated up their supercritical CO2 system to 600 degrees Fahrenheit and provided power to the grid for almost one hour, at times producing up to 10 kilowatts. Ten kilowatts isn’t much electricity, an average home uses 30 kilowatt hours per day, but it is a significant step. For years, the team would dump electricity produced by their tests into a toaster-like resistive load bank, said Darryn Fleming, the lead researcher on the project.

A diagram of Sandia National Laboratories’ simple closed-loop Brayton cycle test loop. The working fluid being compressed, heated and expanded to produce power is supercritical carbon dioxide. Supercritical carbon dioxide is a non-toxic, stable material that is under so much pressure it acts like both a liquid and a gas. (Graphic courtesy Sandia National Laboratories) Click on the thumbnail for a high-resolution image.

“We successfully started our turbine-alternator-compressor in a simple supercritical CO2 Brayton cycle three times and had three controlled shutdowns, and we injected power into the Sandia-Kirtland grid steadily for 50 minutes,” Fleming said. “The most important thing about this test is that we got Sandia to agree to take the power. It took us a long time to get the data needed to let us connect to the grid. Any person who controls an electrical grid is very cautious about what you sync to their grid, because you could disrupt the grid. You can operate these systems all day long and dump the power into load banks, but putting even a little power on the grid is an important step.”

In a simple closed-loop Brayton cycle, the supercritical CO2 is heated by a heat exchanger. Then the energy is extracted from the CO2 in a turbine. After the CO2 exits the turbine, it is cooled in a recuperator before entering a compressor. The compressor gets the supercritical CO2 up to the necessary pressure before it meets up with waste heat in the recuperator and returns to the heater to continue the cycle. The recuperator improves the overall efficiency of the system.

For this test, the engineers heated up the CO2 using an electrical heater, fairly similar to a home water heater. In the future, this heat could come from nuclear fuel, burning fossil fuels or even highly concentrated sunlight.

In fall 2019, Fleming began exploring how Sandia’s closed-loop supercritical CO2 Brayton cycle test loop could be connected to the grid. Specifically, he was looking for advanced power electronic control systems that could regulate supplying electricity into the grid. The team then found KEB America who produces advanced power electronics for elevators that could be adapted for this application.

Elevators use electricity to lift the elevator car up to the top floor of the building, and some elevators convert the potential energy stored in the lifted car back into electricity for the grid as the car is lowered to another floor. These elevators use equipment very similar to that used in the Brayton cycle test loop, called a permanent magnet rotor, to convert this energy, Fleming said. This similarity allowed the Sandia team to adapt commercial-off-the-shelf power electronics from an elevator parts company to control feeding power from their test loop into the grid.

“The achievement here was coupling the system with the advanced power electronics and syncing it to the grid,” said Logan Rapp, a Sandia mechanical engineer who was involved in the test. “We have never done that before; we’d always gone to the load banks. You can draw a pretty clear line from the work we’re doing at 10 kilowatts to about one megawatt. One megawatt is pretty useful; it can power 500-1,000 homes or replace diesel generators for remote applications. Our industry partners are targeting 1- to 5-megawatt systems.”

Having successfully completed this test, the team will work on modifying the system so that it can operate at higher temperatures, 1,000 degrees Fahrenheit and above, and thus produce power with greater efficiencies, said Fleming and Rapp. In 2023, they plan to work on getting two turbine-alternator generators operating in a recompression configuration on the same system, which is even more efficient. The team’s goal is to demonstrate a 1-megawatt supercritical CO2 Brayton cycle system by fall 2024. Throughout this process, they hope to occasionally test the system by supplying electricity to the grid, provided they get approval from the grid operators to do so.

“For actual commercial applications we know that we need bigger turbo machinery, power electronics, larger bearings and seals that work for supercritical CO2, closed Brayton cycles,” Fleming said. “There’s all these different things that need to be done to de-risk the system, and we’re working on those now. In 2023 we’ll be putting it all together into a recompression loop and then we’ll take it to even higher power output, and that’s when the commercial industry can take it from there.”

This work is supported by the Department of Energy’s Supercritical Transformational Electric Power program. Collaborators at Barber-Nichols helped with getting the specifications for the advanced power electronics.