ALBUQUERQUE, N.M. — A proposed project to help scientists use the laws of physics to view multiscale physical events with a clarity never before achieved has won an Early Career Research Program award from the Department of Energy for Sandia National Laboratories researcher Nathaniel Trask. Such work may require observations over a millionfold change in scale, with features ranging from the meter- to microscale. 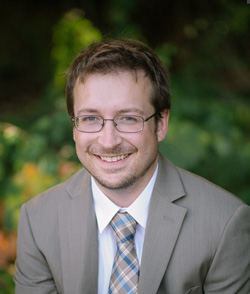 Among areas that would benefit from increased accuracy, he says, are the design of microelectronic devices, resilient energy storage systems and the study of discrete fracture networks in subsurface flows, important in harvesting oil from sparse underground locations.

To achieve this, Trask expects to pre-insert basic laws of physics into machine-learning calculations to eliminate errors that otherwise would have to be found and remediated. Machine learning, a form of artificial intelligence, is the application of tools from statistics that enable limited amounts of data to improve working models created by neural networks. Neural networks, a concept inspired by the firing of neurons in the human brain, create the overall architecture of the model through algorithms designed to recognize patterns.

By bringing together traditional physics simulations with neural-network architectures, a machine-learning framework will be created that preserves unvarying physical laws, such as the conservation of mass, momentum and energy, he says.

“The presence of these known laws of physics are crucial to accurately handling problems in mechanics and electromagnetics. In this manner, physics is engineered directly into the neural network, guaranteeing accurate properties even in small data limits,” he says.

His project, titled “Physics-informed Graph Neural Networks for Data-driven Multiscale Modeling,” will be supported by grants of at least $500,000 a year for five years to cover salary and equipment.

Paul Dabbar, DOE undersecretary for science, said, “The Department of Energy is proud to support funding that will sustain America’s scientific workforce and create opportunities for our researchers to remain competitive on the world stage. By bolstering our commitment to the scientific community, we invest in our nation’s next generation of innovators.”

“Nat’s novel approach to scientific machine learning should [make an] impact [on] many applications of DOE interest,” said his Sandia manager Michael Parks.

“This is a very important area of research for the DOE, and the Early Career Research Program is highly competitive,” said Sandia senior manager Jim Stewart. “Nat’s work stands out through his high level of creativity and mathematical depth.”

Seventy-six scientists from across the nation this year were selected to receive Early Career program funding.

The 11-year-old program, according to the organization, “is designed to bolster the nation’s scientific workforce by providing support to exceptional researchers during crucial early career years, when many scientists do their most formative work.”

Trask has organized workshops and symposiums at a variety of computing meetings. He has published 30 papers and given 57 conference talks, many on mesh-free simulations that produce more interesting results than the formerly standard method of breaking surfaces into small pieces and summing them.

Trask joined Sandia as a research staff member in 2018, after employment as a National Science Foundation postdoctoral fellow at Sandia for the preceding two years.