ALBUQUERQUE, N.M. — Sandia National Laboratories’ Cooperative Monitoring Center is celebrating its 20th anniversary of promoting the principles of cooperation and the value of technology in support of international security agreements. 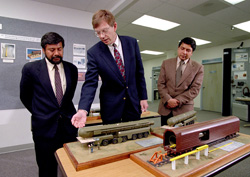 In this 1998 photo, Kent Biringer, manager of International Nuclear Threat Reduction, meets with visiting scholars from Pakistan and India at the Cooperative Monitoring Center. The two men were investigating missile transparency between their countries during a visit to the CMC, which celebrated its 20th anniversary this fall. (Photo by Randy Montoya) Click on the thumbnail for a high-resolution image.

Since it was established in 1994, the CMC has worked to address critical security issues by bringing together policy and technical experts from different nations; showing participants how to use technology and confidence-building measures to solve regional and global security concerns; and creating institutions to promote security in regions around the world.

“The whole principle is that these problems can’t be solved by one country alone; they require cooperation, and technical cooperation is part of that,” said Arian Pregenzer, a CMC founder and Sandia consultant.

Rodney Wilson, director of Sandia’s Global Security & Cooperation Center, recently hosted a celebration for the CMC in Washington, D.C. “We’re celebrating 20 years and I hope there’s 20 years more to come,” he said. “There are a lot of people who really believe in the CMC and they want to contribute to the idea.”

After the Cold War ended, Pregenzer became aware at chemical weapons talks in Geneva that those negotiating the treaties overpromised technology and did not fully understand its capabilities and limitations. At the same time, she observed renewed optimism, particularly in the Middle East, about resolving long-standing issues and instituting confidence-building measures. She recognized that policymakers needed to understand how technology could help.

“There were all these regions where there seemed to be political will to move toward agreements, and those agreements would be nothing if they weren’t implemented — and that meant technology,” Pregenzer said.

Sandia also recognized that many of the technologies developed to address security and arms control issues during the Cold War could be applied to the Middle East, Southeast Asia, and elsewhere, said Kent Biringer, manager of International Nuclear Threat Reduction at Sandia.

The CMC started with a half dozen researchers in a portable building, but later moved to what is now the Sandia Science & Technology Park. Its current home is in the Center for Global Security and Cooperation in the research park.

Visitors to the CMC can use conference rooms for training, offices for research, and the CMC’s Technology, Training and Display area for a hands-on look at technologies, Rodney says.

In the early 1990s, the CMC established trust between researchers in the U.S. and the former Soviet Union to facilitate lab-to-lab efforts on arms control verification, defense conversion and the protection of nuclear and hazardous materials formerly controlled by of a centralized Soviet Union.

During that same period, the CMC also worked with the Chinese on arms control and nonproliferation. Today, a specialized academy, the China Center of Excellence, is being established to train Chinese working in the civilian nuclear sector to promote nuclear security across the Asia-Pacific region. The center is a joint effort of the Chinese Atomic Energy Authority and DOE/NNSA.

Over the years, ideas exchanged between visiting scholars, particularly those from countries where tensions exist, enabled them to develop proposals for their governments together, Pregenzer said.

Scholars visiting Sandia from opposing countries might never have had contact with citizens from the other side, Biringer said. “They’d come together and they might start discussing battles they had been in between the countries and realized that they might have been shooting at each other previously,” he said. “And now, they are here collaborating.” From those strained beginnings, long-term friendships and collaboration formed, he said.

The CMC celebrates two decades this fall and organizers hope it will continue to support technological cooperation and help build trust around the globe. (Image courtesy of Sandia National Laboratories) Click on the thumbnail for a high-resolution image.

An early CMC success was the cooperation it fostered between Jordan and Israel in 2004 that led to explosives detection portals at the Allenby Bridge on the border with Jordan, Biringer said. The technology allowed people and goods to move more rapidly across the border with fewer invasive searches, lessening tensions along the border.

The CMC also helped start a companion facility, the Middle East Scientific Institute for Security (MESIS), in Amman, Jordan. The institute focuses on the technical aspects of regional security and provides a training facility that has been used by a number of U.S. agencies, Biringer said.

Sometimes CMC’s cooperative efforts, while valuable in their own right, serve as precursors to national security agreements. An example was a project that encouraged Israel and Pakistan to share meteorological data in 1998-99, Pregenzer said. The objectives were to teach the process of exchanging data, meeting to discuss it, and the importance of transparency, which are important principles for arms control or other political agreements, she said. Unfortunately, the progress made by the meteorological exchange was interrupted by renewed Israeli-Palestinian violence in 2000.

In the future, organizers hope the CMC principles will multiply the effectiveness of Sandia’s programs to reduce nuclear, radiological, chemical, and biological threats worldwide.

“As I look to the future, I can’t imagine that we can sustain an agreement in Ukraine, Iran, or even Gaza unless there’s some cooperative technical engagement, allowing us to share information, collect data, and build trust between those countries,” Wilson said. “Simply having a diplomatic agreement might not be enough.”