ALBUQUERQUE, N.M. — Students from more than 40 New Mexico schools are expected to benefit from Sandia National Laboratories’ annual K-12 Computer Donation Event next week, where more than 1,000 computers and related accessories will be distributed.

Representatives from schools around the state, who preregistered for the event, will collect the computers for students, along with printers, power cords, keyboards, mice, headphones, monitors and speakers. Last year, tablets were distributed to schools for the first time, and Sandia plans to donate more this year. 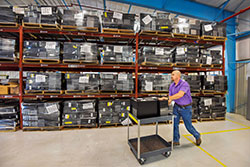 Supply chain team lead Michael Somuk said all equipment is in good condition following use by labs employees for day-to-day work and special projects. Once the equipment has reached the end of its useful life at Sandia and is no longer needed by employees, it can be donated to schools.

Ben Potts, director of technology for Silver Consolidated Schools, said the donations benefit nine schools in his district. Before the Silver City area started participating five years ago, students used outdated equipment and the district was behind in preparing for the statewide digital rollover for standardized testing. Potts said every computer lab in the district comprises equipment from Sandia Labs, including a new STEM lab at the high school.

“We’ve been able to add labs, and, for the most part, teachers are able to obtain as many computers, laptops and iPads as they need,” Potts said, adding that as older equipment is rotated out, some teachers continue to use the equipment to teach students about the inside of computers, or use parts to teach robotics, thus extending computer life even further.

“It’s a win-win for everybody because the schools get computers and equipment in good shape,” said Somuk. “In New Mexico, that is extremely valuable because some school districts have extremely tight budgets. We’ve had schools come to us and say, if it wasn’t for this program they wouldn’t have any information technology resources.”