The labs also won FLC’s Excellence in Technology Transfer Award for advanced nanomaterial window films that could save consumers billions in energy costs each year. 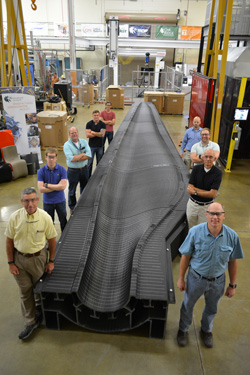 “These two deserving collaborations align well with Sandia’s mission,” said Jackie Kerby Moore, manager of Technology and Economic Development and the labs’ representative to the consortium. “They strengthen our nation’s energy security and resilience by lowering the cost of energy technologies.”

The winners will be honored at an award ceremony today at the consortium’s national meeting in Philadelphia, Pennsylvania.

For four decades, Sandia researchers have designed wind turbines that capture energy more efficiently than prevailing technology and so drive down the cost of renewable energy. But producing prototypes is a drag. Each requires a series of labor-intensive, custom molds that can take up to 16 months to complete before the blade can be built and tested.

Sandia led a partnership that demonstrated a way to reduce this time to just three months. Teaming with Oak Ridge National Laboratory, a leader in the field of 3-D printing, and TPI Composites, the nation’s largest independent manufacturer of wind turbine blades, Sandia 3-D printed the mold directly from a digital design, slashing more than a year from production time. The demonstration focused on a relatively small 13-meter blade, but if applied at larger scales in industry, designers could take more risks with experimental designs and accelerate innovation in wind technologies.

The 2018 Technology Focus Award honors Sandia’s collaborative effort to address a pressing energy-related challenge. Sandia led the design of the blade, including an assessment of the feasibility of using additive manufacturing. TPI consulted on the mechanical parameters and performed the structural design and computer aided design geometry required to successfully mold the blade. Oak Ridge printed the mold in several sections in just two weeks, with the final assembly and manufacturing of the blade at TPI.

“The wind department at Sandia has expertise is designing blades, but our group doesn’t work with additive manufacturing,” Sandia researcher Josh Paquette said. “This project was an opportunity to combine expertise from two laboratories and an industry adviser that could immediately bring this knowledge into the private sector.”

Nanotechnology keeps windows cool in the summer, warm in the winter

In the United States, single-pane windows still make up about 40 percent of all window glass in the South, and nearly 30 percent in the Midwest and northern states, according to the Advanced Research Projects Agency-Energy. Collectively, these poor insulators lose a tremendous amount of heating and cooling energy. A partnership between Sandia and Santa Fe, New Mexico-based IR Dynamics is developing advanced nanoparticle films that boost the energy efficiency of windows, which could save American consumers as much as $12 billion each year and significantly reduce national energy consumption. 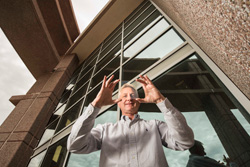 The IR Dynamics-Sandia team creates the films with nanoparticles of the compound vanadium dioxide. While some materials, such as aluminum, reflect light and heat, and others, such as glass, transmit them, vanadium dioxide is temperature-sensitive (thermochromic) and does both. The nanoparticle films transition from heat-transparent to heat-reflective in response to the temperature.

Applying an energy-efficient film would likely be much less expensive than a full window replacement, so consumers would enjoy greater savings sooner.

“The FLC award recognizes the efforts of the Center for Integrated Nanotechnologies as an incubator to support transfer of licensed Sandia technologies to the private sector,” Sandia engineer Paul Clem said. “We have received strong support both from CINT and from Sandia’s technology transfer office, including Cooperative Research and Development Agreements and New Mexico Small Business Assistance, for small-business nanotech collaborative development.” CINT is a DOE Office of Science user facility operated by Sandia and Los Alamos National Laboratory.

“3-D printed casting molds and heat-sensitive nanoparticle films are great examples of how Sandia’s scientific research translates into products that benefit the public, and at the same time enable our missions,” said Mary Monson, senior manager of Technology Partnerships and Business Development at Sandia. “These partnerships are important to Sandia’s contributions in energy security, reliability and efficiency. We look forward to engaging with additional partners to make these and other innovations more widely available.”

The Federal Laboratory Consortium for Technology Transfer is a nationwide network of more than 300 members that provides a forum to develop strategies and opportunities for linking laboratory mission technologies and expertise with the marketplace. The awards program annually recognizes federal laboratories and their industry partners for outstanding technology transfer efforts. Since its establishment in 1984, the organization has presented awards to nearly 200 federal laboratories, becoming one of the most prestigious honors in technology transfer.