Starting point for suppliers at Sandia is not a recording

ALBUQUERQUE, N.M. — The first voice people hear when they call Sandia National Laboratories for information about becoming a supplier is the real thing.

“I was surprised to talk to a live person about how to do business with Sandia,” said Danny Ruiz of Mazda Computing in Albuquerque. “You don’t normally get that with large contracting agencies.” 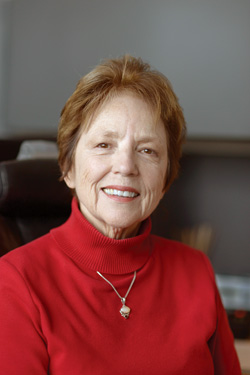 Ann Riley’s is the first voice many business people hear when they reach out to Sandia National Laboratories as potential suppliers. “If they say Ms. Riley, I say, ‘Call me Ann.’ We become friends,” said Riley, who responds to thousands of calls and emails a year. (Photo by Randy Montoya) Click on the thumbnail for a high-resolution image.

The person who picked up the phone was Ann Riley, a member of Sandia’s Small Business Utilization team and the labs’ Business Point of Contact (BPOC). Riley fields all calls from those who want to become Sandia suppliers.

“It’s about providing great customer service,” Riley said. “Most of the callers are small companies, and we’re here to help them.”

Ruiz’s company ultimately won a Sandia contract. “Ann still calls every now and then to see how we’re doing,” he said. “The process is great.”

The BPOC was launched five years ago to help people who want to do business with the labs but don’t know how.

“People would try to find somebody, anybody, they could talk to,” Riley said. “We didn’t want to create a system where an automated voice said, ‘Press one, press two, press three.’ Everyone knows how frustrating that is.”

The BPOC connects businesses to a person who can answer questions and solve specific problems in a single phone call. “Before the BPOC, people became very frustrated,” said Don Devoti, manager of Sandia’s Small Business Utilization. “People complained about how difficult it was to do business with Sandia. Now callers get to the right person every time.”

The BPOC phone number (800-765-1678) and email address (supplier@sandia.gov) are on Sandia’s external website. In addition to talking with the BPOC, each interested supplier who calls receives a letter with detailed instructions on what to do next. Riley also guides them through the Business Opportunities website, which lists Sandia contracting opportunities.

Callers with serious supplier potential are referred to a Sandia small business advocate, who follows up. “Small business is huge at Sandia,” said Riley, a former small-business owner. The labs spend about $500 million a year with small companies, more than half of them in New Mexico.

Krista Smith, a supply chain senior manager, said, “Our goal is to give suppliers an honest assessment of whether or not their products or services match Sandia’s needs. We also want to let them know the rigor involved in working with Sandia, like our stringent safety and quality requirements. We know that it is expensive for suppliers to pursue new business, so we aim to make their first inquiry as informative and efficient as possible.”

In some cases the BPOC will refer a caller to other contracting agencies such as Kirtland Air Force Base, local governments or other federal labs.

In fiscal year 2014, Sandia’s BPOC responded to 2,161 calls and 3,892 emails from all over the world. Riley sets the tone by making the caller feel comfortable.

“If they say Ms. Riley, I say, ‘Call me Ann.’ We become friends,” she said. “They are absolutely blown away that Sandia provides such a service. They can’t believe a company this size has a real person to talk to. I get that over and over again.

“This is about helping our supplier community, especially our small businesses, figure out this huge entity called Sandia National Laboratories and alleviating the fear,” she said. “We want them to start out on the right foot because we know that with nearly half of our annual dollars spent in procurements, we could not be successful without our suppliers.”

Click here for more information on working with Sandia.