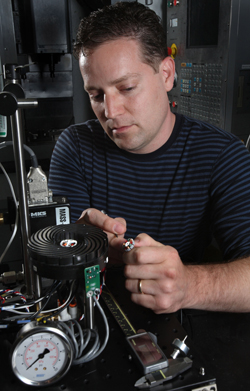 Sandia’s Jeff Koplow makes an adjustment to an earlier prototype of his Air Bearing Heat Exchanger invention. The technology, known as the “Sandia Cooler,” significantly reduces the energy needed to cool the processor chips in data centers and large-scale computing environments. (Photo by Dino Vournas.) Click on the thumbnail for a high-resolution image.

LIVERMORE, Calif. — Sandia National Laboratories has developed a new technology with the potential to dramatically alter the air-cooling landscape in computing and microelectronics, and lab officials are now seeking licensees in the electronics chip cooling field to license and commercialize the device.

The “Sandia Cooler,” also known as the “Air Bearing Heat Exchanger,” is a novel, proprietary air-cooling invention developed by Sandia researcher Jeff Koplow, who was recently selected by the National Academy of Engineering (NAE) to take part in the NAE’s 17th annual U.S. Frontiers of Engineering symposium.

Koplow said the Sandia Cooler technology, which is patent-pending, will significantly reduce the energy needed to cool the processor chips in data centers and large-scale computing environments. The yearly electricity bill paid by the information technology sector in the U.S. is currently on the order of seven billion dollars and continues to grow.

Dramatic improvements in cooling, other benefits

In a conventional CPU cooler, the heat transfer bottleneck is the boundary layer of “dead air” that clings to the cooling fins. With the Sandia Cooler, heat is efficiently transferred across a narrow air gap from a stationary base to a rotating structure. The normally stagnant boundary layer of air enveloping the cooling fins is subjected to a powerful centrifugal pumping effect, causing the boundary layer thickness to be reduced to ten times thinner than normal. This reduction enables a dramatic improvement in cooling performance within a much smaller package.

In this diagram of the Sandia Cooler, heat is transferred to the rotating cooling fins. Rotation of the cooling fins eliminates the thermal bottleneck typically associated with a conventional CPU cooler. (Diagram courtesy of Jeff Koplow.) Click on the thumbnail for a high-resolution image.

The Sandia Cooler also offers benefits in other applications where thermal management and energy efficiency are important, particularly heating, ventilation and air-conditioning (HVAC). Koplow said that if Air Bearing Heat Exchanger technology proves amenable to size scaling, it has the potential to decrease overall electrical power consumption in the U.S. by more than seven percent.

A technical white paper on the Sandia Cooler technology can be found here.

Sandia’s work on the cooler technology was funded initially through internal investments. Follow-on funding is also being provided by the Department of Energy’s Office of Energy Efficiency and Renewable Energy (EERE).