LIVERMORE, Calif. — Fuel cells are used in the space shuttle as one component of the electrical power system, so perhaps it was appropriate that a hydrogen fuel cell-powered mobile lighting system could be seen on the grounds of the Kennedy Space Center as the Space Shuttle Atlantis launched into space last week, the 135th and final mission for the NASA Space Shuttle Program. 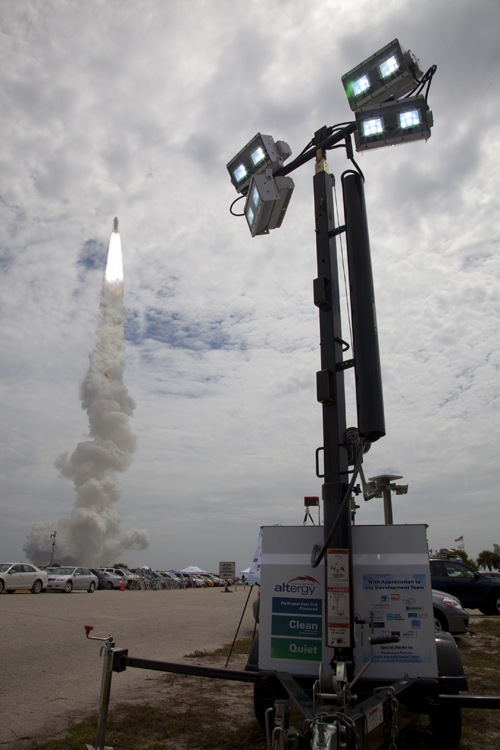 The lighting system, sponsored by the U.S. Department of Energy (DOE) Office of Energy Efficiency and Renewable Energy (EERE) in conjunction with Boeing Co., and developed by Sandia National Laboratories with several industry partners, was deployed to the site of the final space shuttle launch and observed by visitors, shuttle astronauts and members of the international media.

The unit provided lighting in the international press area, and its auxiliary power was used to conveniently recharge the camera battery packs for a number of photographers at the event. The NASA deployment was the latest in a series of high-profile test sites where the lighting system has been utilized.

The hydrogen fuel cell-powered mobile lighting system is a clean, quiet and efficient alternative to traditional technologies commonly powered by diesel fueled generators. The system features a fuel cell running on pure hydrogen, resulting in zero-emission electrical power. The fuel cell produces electricity for an advanced, power-saving Light Emitting PlasmaTM (LEP) lighting system and additional auxiliary power up to 2.5 kW, which allows additional equipment (such as power tools, public address systems or security metal detectors) to be powered by the unit at the same time the system is providing illumination.

Sandia researchers estimate that a single hydrogen fuel cell-powered lighting system would offset 900 gallons of diesel fuel per year and completely eliminate soot, nitrogen-oxide and carbon-dioxide emissions, allowing the system to be used indoors in contrast to current diesel technology.

The prototype system has been tested in a variety of environments and has primarily focused on the entertainment, transportation and airport sectors. In addition to NASA (which also used the system during the Space Shuttle Endeavor launch) customers who have provided test sites include the California Department of Transportation, the 2010 Academy Awards ceremony, the 2011 Golden Globe Awards, the 2011 Screen Actors Guild Awards and the 2011 Grammy Awards. Boeing, the San Francisco International Airport and Paramount Pictures will soon be deploying units as well.