IED detector developed by Sandia Labs being transferred to Army 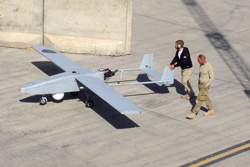 But those early doubts are long gone. Sandia’s Copperhead — a highly modified MiniSAR system mounted on unmanned aerial vehicles (UAVs) — has been uncovering IEDs in Afghanistan and Iraq since 2009. Now, Sandia is transferring the technology to the U.S. Army to support combat military personnel, said Sandia senior manager Jim Hudgens.

“JIEDDO tested a number of technologies and ours emerged as one that was viable,” Hudgens said. “Today, we’re acknowledged as the most successful airborne IED detection capability out there.”

Department of Energy Secretary Ernest Moniz honored the team that developed Copperhead with an Achievement Award at a ceremony this spring in Washington, D.C.

Copperhead detects disturbances in the earth, for example, those made when IEDs are buried. It can find them day or night and in many weather conditions, including fog and dust storms. Extremely fine-resolution images are processed onboard UAVs and transmitted real-time to analysts on the ground. Those analysts pass the information to soldiers charged with destroying IEDs.

Though IED detonations have declined in Afghanistan since a peak of more than 2,000 in the month of June 2012, Department of Defense reports indicated IEDs accounted for about 60 percent of U.S. casualties that year.

Sandia is a world leader in the development of SAR systems, a history that grew out of its mission to develop radars for nuclear weapons. Recent SAR systems have vastly improved radar images from aircraft flying at great heights.

SAR and its descendent MiniSAR, the first system of its size to successfully transmit real-time images from UAVs in 2006, use small antennae that capture reflections of microwaves returned from objects on the ground, transmitting and receiving many radar pulses as the aircraft flies. The received pulses are integrated by signal-processing techniques to synthesize a fine-resolution image, hence the name “synthetic aperture.”

Hudgens and Sandia manager Bill Hensley say had it not been for Sandia’s research and development process funded, in part, by the Laboratory Directed Research and Development program, to reduce the size of the SAR that led to MiniSAR, Copperhead might never have been ready in time to help the Army.

But MiniSAR was still limited when it came to the real-world problem of IEDs. As Americans heard more reports of soldiers killed or maimed by IEDs in Afghanistan and Iraq, Sandia researcher Bryan Burns wanted to help.

“People were getting blown up driving along the road and I said, ‘We can help solve this problem,’” Burns said.

A few different demonstrations and tests were conducted to demonstrate the fundamental capability.  Though some experts expressed doubt that any coherent change-detection system could detect IEDs, in 2007, the Sandia team connected with Mark Moran, director of the special projects office at CRREL. Moran’s team was running a series of scientific investigations to predict the operational ability of various technologies for JIEDDO. During one of those tests, the team showed the value of the MiniSAR technology.

JIEDDO then became interested in the technology and assigned Moran’s team at CRREL as the developing and fielding program office. JIEDDO needed Copperhead developed in nine months, about half Sandia’s normal development period, Hensley said.

Just as cameras are limited by depth of field — where a near object is in focus but the background is blurry or vice versa — MiniSAR needed a way to keep the entire height of the terrain in an image in focus, for example, the top of a mountain and the valley floor.

So Bryan created advanced image-processing algorithms that focused the high and low terrain simultaneously while continuing to provide fine-resolution imagery. The new capability, which has been proven effective on slopes of more than 40 degrees, made Copperhead useful in the wide variety of terrain present in places like Afghanistan.

To make Copperhead a reality, more than 300 Sandia employees each spent at least three months on the project during development, including researchers with diverse areas of expertise and staff who helped with logistics, foreign travel and contracting, Hensley said.

Sandia and its partners had to quickly adapt and enhance the 30-pound MiniSAR so it could fly on NAVAIR’s 17-foot Tiger Shark UAV and accomplish the mission JIEDDO had set.

When the modifications were made Copperhead’s MiniSAR technology weighed about 65 pounds and was about 1 foot wide, it could do its entire image processing on board and was rugged enough for the environments it would face, Hudgens said.

Then the modified MiniSAR was integrated into the operational system known as Copperhead, which includes hardware and software tools to help radar analysts on the ground understand the data coming from the aircraft and a training program for them.

“We developed a flight planner and an exploitation tool that the analysts use in the ground station, and we had to develop all the concepts of operations to make it work and tactics, techniques and protocols for utilizing the system,” Hudgens said. “While MiniSAR was a radar that we flew and used to collect data, Copperhead is an entire system, everything from communications to analyzing imagery to providing information useful to people who defeat IEDs.”

In 2009, JIEDDO sponsored a 30-day evaluation of the technology in wartime conditions and — despite doubts raised that all the images could have such fine resolution — Copperhead has been fielded in Afghanistan ever since, Hensley said.

Copperhead uses a technology called coherent change detection, which compares a pair of extremely detailed SAR images taken of the same scene but at different times. The process allows analysts to detect minute physical changes on the surface.

“There are other approaches to change detection out there, but this is the only one that’s all-weather,” Hudgens said.

An earlier version of coherent change detection developed at Sandia showed images of a lawn taken 20 minutes apart from an aircraft flying 10,000 feet up and three miles away. The images revealed the path of a lawn mower due to the bending of the blades of grass.

Burns and the team are working with the Army to ensure that Copperhead continues to solve current problems. “We’re helping them to use it in better and more effective ways, even when things change,” he said. “The system is continuously adapting.”

Sandia’s transfer of the technology to the Army will take years to complete, but the Sandia team members say they are happy that they’ve provided the Army with a needed tool to detect IEDs.

Of the transfer to the Army, Hensley said, “We’re making a positive, measureable impact right now on the security of U.S. people. This acknowledgement that it needs to be kept in the Army is very satisfying.”