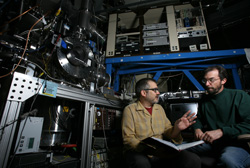 Sandia combustion researchers Craig Taatjes, left, and David Osborn discuss data found from the detection and measurement of Criegee intermediate reactions. The apparatus was used to make the measurements, which researchers believe will substantially impact existing atmospheric chemistry. (Photo by Dino Vournas) Click on the thumbnail for a high-resolution image.

Criegee intermediates — carbonyl oxides — are implicated in autoignition chemistry and are pivotal atmospheric reactants, but only indirect knowledge of their reaction kinetics had previously been available. The article, titled Direct Kinetic Measurements of Criegee Intermediate (CH2OO) Formed by Reaction of CH2I with O2, reports the first direct kinetics measurements made of reactions of any Criegee species, in this case formaldehyde oxide (CH2OO). These measurements determine rate coefficients with key species, such as sulfur dioxide (SO2) and nitrogen dioxide (NO2), and provide new insight into the reactivity of these transient molecules.

The detection and measurement of the Criegee intermediate reactions was made possible by a unique apparatus, designed by Sandia researchers, that uses light from a third-generation synchrotron user facility, Lawrence Berkeley National Laboratory’s Advanced Light Source, to investigate chemical reactions that are critical in hydrocarbon oxidation. The intense tunable light from the synchrotron allows researchers to discern the formation and removal of different isomeric species — molecules that contain the same atoms but are arranged in different combinations.

In the present case, CH2OO can be distinguished from its more stable isomer, formic acid (HCOOH), because of their differing thresholds for photoionization. The Manchester and Bristol researchers recognized that this apparatus could elucidate not only combustion reactions but also important tropospheric oxidation processes, such as ozonolysis.

Ozonolysis, or the cleavage of carbon-carbon double bonds through reaction with ozone, is a reaction that plays a key role in a number of fields, including synthetic chemistry and tropospheric removal of unsaturated hydrocarbons. In the 1950s, Rudolf Criegee proposed that ozonolysis of alkenes occurs via the carbonyl oxide biradicals, now called Criegee intermediates. Criegee intermediates  also have been calculated to be markers of critical chain-branching steps in hydrocarbon autoignition chemistry.

However, until 2008 no gas-phase Criegee intermediate had been observed, and rate coefficients derived from indirect measurements spanned orders of magnitude.

In the Science publication, Sandia researchers reported a new means of producing gas-phase Criegee intermediates and used this method to prepare enough CH2OO to measure its reactions with water, SO2, nitric oxide (NO), and NO2. The ability to reliably produce Criegee intermediates will facilitate studies of their role in ignition and other oxidation systems.

In particular, the present measurements show that the reactions of CH2OO with SO2 and NO2 are far more rapid than previously thought. Moreover, the Bristol and Manchester investigators demonstrated that these kinetics results imply a much greater role of carbonyl oxides in tropospheric sulfate and nitrate chemistry than models had assumed, a conclusion that will substantially impact existing atmospheric chemistry mechanisms. For example, SO2 oxidation is the source of sulfate species that nucleate atmospheric aerosols. Because the oxidation of SO2 by Criegee intermediate is much faster than modelers assumed, Criegee reactions may be a major tropospheric sulfate source, changing predictions of tropospheric aerosol formation.

This capability breakthrough was funded by the Office of Basic Energy Sciences (BES) within the Office of Science in the U.S. Department of Energy, and conducted using the Advanced Light Source, a scientific user facility supported by BES.