LIVERMORE, Calf. — Two researchers at Sandia National Laboratories are using genetic resequencing tools to find a way to stop the COVID-19 pandemic in its tracks. 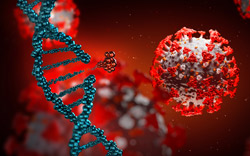 Sandia National Laboratories is researching genetic editing to find a countermeasure for COVID-19. (Illustration by Loren Stacks) Click the thumbnail for a high-resolution image.

“The goal is to find new ‘reloadable’ countermeasures for viral outbreaks that do not have to be re-invented every time,” Schoeniger explained. “CRISPR is a technology that allows us to address specific sequences of DNA and RNA, safely editing genes or controlling gene expression, to target viruses and improve the body’s ability to resist infection.”

Once their research is complete, the antiviral will be able to be customized to respond to many different viruses, including coronavirus.

“We are developing safe CRISPR-based technologies that send temporary reprogramming codes to your body that will inhibit virus infection,” Negrete added. “We’re also developing nanoparticle delivery systems to protect the CRISPR constructs until they get to the right cells and tissues to modulate the body’s response.”

This CRISPR-based research is funded by the Biological Technologies Office in the Defense Advanced Research Projects Agency.

“I think this current pandemic shows that we have a vulnerability to this and that this is more than a health problem. It is a national security problem,” Schoeniger said. “Coronavirus was already on our radar. When the new strain called SARS-CoV-2 emerged and it was clear this was not a local problem in China, we started to pivot to that research pretty early. We’ve added on more institutional work since then.”

The team is conducting proof-of-concept trials now, after which other institutions involved in the research will conduct animal testing of the modified genes. Schoeniger said the work will continue even if this outbreak is controlled.

“There’s a long tail that’s going to be around for a while,” he said. “Things can happen during that tail that we can’t know. We want to help reinforce that response to not only a new outbreak of COVID-19 but outbreaks of all kinds.”

Schoeniger, M.D./Ph.D., is a biochemist at Sandia and systems biology manager. Negrete, Ph.D., is a virologist focused on emerging viruses and molecular viral-host interaction.