Sandia detection method might someday be incorporated into hand-held instruments

ALBUQUERQUE, N.M. — Researchers at Sandia National Laboratories have developed a method to detect trace amounts of synthetic opioids. They plan to combine their approach with miniaturized sensors to create a hand-portable instrument easily used by law enforcement agents for efficient detection in the field. 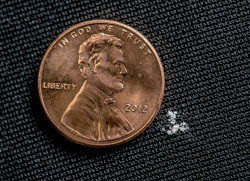 A photo illustrating 2 milligrams of fentanyl, a lethal dose for most people, compared to a penny. Matthew Moorman, a Sandia National Laboratories researcher, has developed a new method to detect tiny amounts of fentanyl analogs based on their common molecular structures. (Photo courtesy of the Drug Enforcement Administration) Click on the thumbnail for a high-resolution image.

Fentanyl is a fast-acting, opioid-based pain reliever that is 80 to 100 times more potent than morphine. Illegally produced fentanyl often is mixed with other drugs such as cocaine or heroin and minuscule amounts can cause death by overdose. Drug overdose deaths, predominantly due to synthetic opioids such as illicitly manufactured fentanyl and fentanyl analogs, have accelerated during the COVID-19 pandemic, according to the Centers for Disease Control and Prevention.

The chemical structure of fentanyl can be modified to create molecular analogs. These analogs can have different potencies, and it can be difficult for law enforcement agencies to keep up with emerging analogs.

Matthew Moorman, a Sandia researcher, wanted to develop a method to detect fentanyl analogs based on their common molecular structures, or “cores,” rather than by identifying the individual chemical decorations found on each one.

“A lower false-alarm rate with this detection method could lead to more efficient screening of trace amounts of opioids at the border or in mail-sorting stations,” he said.

There are thousands of possible analogs of fentanyl, according to the Department of Homeland Security. Lab-based chemical analysis using sensitive techniques, such as infrared spectroscopy or mass spectrometry, can identify new analogs of fentanyl by their molecular “fingerprints.”

But the large number of possible fingerprints increases the chance of false alarms. By focusing on the common opioid core, rather than the changeable fingerprints, Moorman’s work will streamline the process of detecting synthetic opioids.

In order to detect opioids based on their common cores, Moorman and his colleagues used a technique that decomposed the molecular structure of several fentanyl analogs. They noticed this process frequently produced the same molecular fragments. Using a miniaturized ion-mobility spectrometer developed at Sandia for field-based explosives sensing, they could detect the synthetic opioid-based fragment in a less than a billionth of a gram of sample, even when mixed with cutting agents that drug manufacturers commonly use to dilute the compounds.

The work to demonstrate the proof-of-concept fragment detection was funded by Sandia’s Laboratory Directed Research and Development program. The researchers now want to combine this detection method with their miniaturized chemical sensors to develop an instrument that law enforcement agents could use in the field to detect the presence of synthetic opioids. They expect to have a functional, field-tested prototype within three years.

They also hope to apply the same fragment-based detection approach to other classes of illegal drugs, such as synthetic cannabinoids, cocaines and ketamines, Moorman said.