LIVERMORE, Calif. — Researchers at Sandia National Laboratories have created a platform for discovering, designing and engineering novel antibody countermeasures for emerging viruses. This new process of screening for nanobodies that “neutralize” or disable the virus represents a faster, more effective approach to developing nanobody therapies that prevent or treat viral infection. 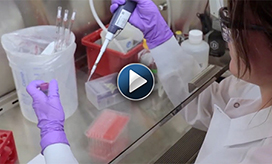 Traditionally used to treat a variety of conditions, including cancer, autoimmune and inflammatory diseases, nanobodies are smaller components of conventional antibodies — a vital element of the body’s immune system that defends against disease-causing viruses or bacteria.

After screening a large, diverse library of synthetic nanobodies, Sandia researchers identified and evaluated several potent nanobodies that can protect against COVID-19. The scientists now aim to replicate this method to defend against current and future biological threats.

“The coronavirus pandemic has made evident the need for a broad range of preventive and therapeutic strategies to control diseases associated with novel viruses,” said Craig Tewell, director of Sandia’s Chemical, Biological, Radiological, and Nuclear Defense and Energy Technologies Center.

With a rich history of biodefense research, Sandia helps protect the nation and the world from threats presented by bioterrorism and naturally occurring diseases, Tewell said.

“With a deep understanding of how infectious disease develops and spreads, as well as how the immune system defends from infection,” Tewell said, “our researchers are in a unique position to advance the creation of a wide array of disease-fighting tools, including nanobodies.” 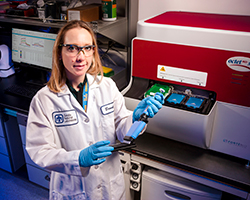 Brooke Harmon, a virologist at Sandia National Laboratories, leads research to discover, design and engineer novel antibody countermeasures for emerging viruses. (Photo by Randy Wong) Click on the thumbnail for a high-resolution image.

“Vaccines are very good at preventing infection, but they can take a long time to be developed and move through the regulatory process,” Harmon said. “We saw a critical need to create effective therapies that can be rapidly developed and deployed.”

Once the protein sequence, or genetic coding, of a virus has been identified, Sandia researchers have shown they can produce a nanobody-based countermeasure within 90 days. The method has not yet been tested on humans. Speeding up the discovery of neutralizing antibodies could reduce the impact of future viral outbreaks.

“Under current practice, virologists rely upon patients’ blood samples to build an antibody library that we can then screen for potential treatments. This means we have to wait, either for people to become infected or for those who are vaccinated to build an immune response,” Harmon said. “Sandia’s new method is more forward-thinking. Because we have already built a highly diverse, proprietary library, we can begin to screen for extremely potent neutralizing nanobodies as soon as the genetic coding of a virus has been identified.”

Neutralizing nanobodies represent an attractive strategy, Harmon said, due to their ability to work effectively against an entire family of viruses or variants.

“We can take advantage of the fact that virus families tend to interact with immune response in the same way,” Harmon said. “This makes our treatments rapidly adaptable to all variants of a virus.” 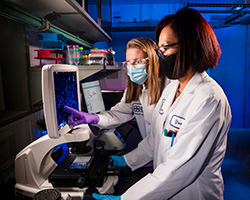 Sandia National Laboratories researchers Jennifer Schwedler, left, and Yooli Kim Light advance the creation of a wide array of disease-fighting tools, including nanobody therapies. (Photo by Randy Wong) Click on the thumbnail for a high-resolution image.

Nanobodies are modular, meaning they can be combined with other nanobodies to increase their ability to bind to the virus or target specific tissues. Nanobodies can also be produced as smaller versions of conventional antibodies with the ability to engage the immune response.

Additionally, due to the small size of the nanobodies, they can be released into the blood and penetrate tissues more thoroughly than conventional antibodies. Nanobody therapies can also target an infection site directly, decreasing the dose needed and increasing efficacy.

Nanobodies can also be administered via aerosol, so they can be given to a patient orally or in an inhalable form. Conventional antibody treatments are less versatile and must be received through injection only.

“All of these qualities and features of nanobodies make nanobody therapies more effective than current solutions. These treatments are also easier and cheaper to manufacture,” Harmon said, “making Sandia’s method for developing and characterizing novel neutralizing antibodies an invaluable addition to the toolset for combatting the COVID-19 pandemic and future health crises.” 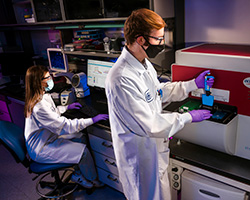 Christine Thatcher, left, and Peter McIlroy are members of the nanobody research team at Sandia National Laboratories. With a rich history of biodefense research, Sandia helps protect the nation and the world from threats presented by bioterrorism and naturally occurring diseases. (Photo by Randy Wong) Click on the thumbnail for a high-resolution image.

Sandia’s research on nanobodies for emerging viruses received national recognition in October as a recipient of a 2021 R&D 100 Award, which honors the 100 most technologically significant products and advancements in the past year.

This research also received acclamation at the 2021 National Lab Accelerator Pitch Event, where scientists present seasoned investors with business model ideas based on innovations at Department of Energy laboratories. A video of Sandia’s presentation at the event can be viewed here.

One role of the national laboratories is to develop innovative technologies and commercialize the underlying intellectual property through licensing agreements with companies. The labs also engage the expertise of industry and academia to further develop technology using cooperative research and development agreements. Sandia is currently exploring multiple opportunities for licensing this research and partnering with others in the bio and chemical defense, diagnostics and medical research fields.