ALBUQUERQUE, N.M. — Transportation accidents, such as trucks crashing on a highway or rockets failing on a launch pad, can create catastrophic fires. It’s important to understand how burning droplets of fuel are generated and behave in those extreme cases, so Sandia National Laboratories researchers have developed 3-D measurement techniques based on digital in-line holography.

Digital in-line holography, known as DIH, is a laser-based technique that has been around since the 1990s. Sandia advanced the technique with new algorithms to mine critical information from recorded holograms and new applications in tough fire environments, said Daniel Guildenbecher, a researcher in thermal/fluid experimental sciences. 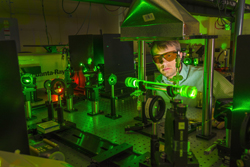 Sandia National Laboratories researcher Daniel Guildenbecher and colleagues have developed 3-D measurement techniques based on digital in-line holography to understand the generation and behavior of burning droplets of fuel from such incidents as transportation crashes. In his lab, he simulates a four-wave mixing cell to generate phase-conjugate light, one of the techniques used. (Photo by Randy Montoya) Click on the thumbnail for a high-resolution image.

“We live in a 3-D world and if you think of traditional imaging, it’s 2-D,” he said. “This technique is one of the few that can give you a 3-D measurement of a flow such as a fire.”

DIH passes a laser through a particle field. The interaction between the laser and the particles creates diffraction patterns, which a camera records. Then researchers use computers to solve diffraction integral equations, allowing them to take light recorded at the camera plane and refocus it back to the original planes of the particle locations. That gives the position of particles as they were in 3-D space.

In a propellant fire, large molten aluminum drops form at the burning surface. They’re lofted into the environment and can severely damage anything they fall on. Researchers study this by passing a laser through fire while high-speed cameras record the diffraction patterns. Refocused digital holograms provide a clear picture of the burning particles. By measuring the size and velocity of thousands of such particles, researchers can better understand how the particles are formed and transported in this flow.

“Fundamental understanding of particle formation and transport is necessary to develop next-generation [computer] models which predict this scenario,” Guildenbecher said. “Due to the corrosive environment, it’s very difficult to measure these phenomena using traditional instruments. You need to have advanced diagnostics and advanced modeling.”

Sandia’s digital in-line holography method uses nanosecond lasers to freeze the motion of particles and kilohertz imaging to track droplets’ size and velocity. Recording and quantifying all droplets in a 3-D volume — the digital hologram — lets researchers quickly measure thousands of individual drops, allowing for accurate quantification of size and velocity. In addition, measuring particle shape enables them to differentiate spherical drops from other particulates in the flow.

Previous work on particle-field DIH largely focused on measuring spherical particles in controlled environments. However, Sandia needed to measure arbitrarily shaped objects in difficult, real-world environments. So Guildenbecher and colleagues developed new data-processing algorithms that automatically measure complex particle structures in 3-D space, quantifying their accuracy through laboratory experiments. “Validation experiments were instrumental to improving the technique and gave us the confidence to apply the method to a wide range of applications,” he said.

“Sandia has a long history of developing groundbreaking imaging for a wide range of applications. For example, recent rapid advances in high-speed digital imaging have enabled 2-D videography at frame rates from kilohertz to megahertz. This has greatly increased our experimental resolution of many important phenomena,” Guildenbecher said. “Digital holography is one of a handful of techniques that allow us to expand these technologies to 3-D.”

DIH is important diagnostic tool in many areas

The researchers also have used DIH to quantify liquid breakup due to strong gas flows and impacts on surfaces. They measured complex, ring-shaped ligaments in 3-D space, which provided new physical insight into how droplets form. “In a transportation accident, the breakup of liquid fuel leads to wide dispersion of droplets and large-scale fire. Liquid breakup must be understood to predict the scale and intensity of such fires,” Guildenbecher said.

“By focusing on doing something cutting edge, we discovered applications that no one else had attempted and measured phenomena we never expected,” he said. “I liked that we were able to find so many ways to utilize this exciting technology.”

They also looked at particles from shotgun shells, which Guildenbecher said was fun but had a practical purpose. “There’s interest in understanding how particulates behave in explosive environments, and we set up a shotgun as a simulant for this environment.” Results of the successful demonstration were published in a 2013 paper in Optics Letters.

The team published additional papers in such publications as Applied Optics, Optics Express and Experiments in Fluids and presented their work at numerous conferences over the past three years. Guildenbecher was invited to give talks at the 2015 Gordon Research Conference on Laser Diagnostics in Combustion in Waterville Valley, N.H., and the 2014 Laser Applications to Chemical, Security and Environmental Analysis conference in Seattle. Guildenbecher, Sandia colleague Phillip Reu and professor Jun Chen and doctoral student Jian Gao of Purdue University were awarded the 2014 ASME Fluid Engineering Division’s Robert T. Knapp award at the organization’s summer meeting. The award recognizes an outstanding original paper resulting directly from analytical or laboratory research.

DIH is a crucial diagnostic tool for a new Sandia Laboratory Directed Research and Development project to quantify the breakup of molten components in shock-induced flows. In this environment, changing temperatures and the small size of the particulates distort the hologram image. Guildenbecher and colleagues will look at potential improvements to DIH methods that could correct those distortions.

Guildenbecher became interested in the field when, as a doctoral student, he ran into limitations in commercial diagnostics for studying multiphase flows. When he joined Sandia 2011, he teamed with researchers working in digital imaging.