ALBUQUERQUE, N.M. — A former Sandia National Laboratories senior scientist and nuclear safety expert who studied the Three Mile Island and Chernobyl nuclear power plant accidents during his more than 40-year career has been elected a member of the National Academy of Engineering (NAE). 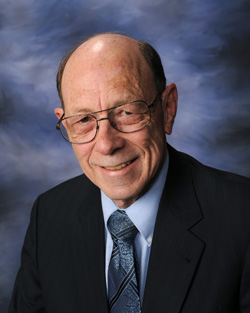 Dana Powers, who recently retired from Sandia’s Advanced Nuclear Energy Programs, was elected “for contributions to commercial nuclear power plant safety worldwide and to radioactive source-term processes,” according to the NAE.

Powers is among 79 new members who will receive their diplomas during the induction ceremony at the NAE Annual Meeting in October. Election to the NAE is among the highest professional distinctions accorded to an engineer. Academy membership honors those who have made outstanding contributions to engineering research, practice or education, including significant contributions to the engineering literature and to the pioneering of new and developing fields of technology, making major advancements in traditional fields of engineering or developing or implementing innovative approaches to engineering education.

Powers received a bachelor’s in chemistry and a doctorate in chemistry, chemical engineering and economics from the California Institute of Technology.

Shortly after his arrival, the Nuclear Regulatory Commission (NRC) asked him to consult on metallurgy issues.

In those days, the NRC’s research about severe accidents at nuclear power plants was speculative. “They didn’t think they were a very high probability, but they wanted to know what would happen if you had one,” Powers said. “Then along came Three Mile Island and suddenly nuclear accidents became very, very real.”

After Three Mile Island (TMI) — a pressurized-water reactor in Pennsylvania that partially melted down in 1979 — Powers became heavily involved in researching chemical and metallurgical conditions at the plant. He was appointed a consultant to the President’s Commission on the Accident at Three Mile Island.

Research by Sandia and others indicated that part of TMI’s core had melted, but “people at the time absolutely rejected that notion, so we were in for a lot of criticism,” Powers said. “The industry didn’t think it was possible to melt the cores at the time. We were seeing the evidence and there was no other way to explain it.”

About five years later, Powers was among those listening on an open telephone line as a fiber optic cable was lowered to inspect what was thought to be the core. As the cable was being lowered and the core was still not visible, the operators were so convinced that the core had remained intact that they explored whether the cable was kinked or the measurements were incorrect. They finally realized the reason the core wasn’t seen was that it had partially melted,proving research supporting a partial meltdown was correct.

“TMI was a tremendous revolution and wake-up call to the industry. Even in the regulatory community we found out a lot about severe accidents that we had never imagined and learned a huge amount,” he said. For example, researchers learned what evidence was important in a reactor failure, what to preserve and where to look for answers.

In 1981, Powers became supervisor of Sandia’s Reactor Safety Research Division, which conducted analytic and experimental studies of severe reactor phenomena in fast reactors, as well as light-water reactors, the most common in the U.S. today. The research helped the NRC and Department of Energy (DOE) better understand the effects of potential severe accidents in nuclear power plants and how to mitigate the risks.

“We were trying to understand how accidents progress. What can you do about them? Is there a way to stop them? If you can’t stop an accident, can you mitigate its consequences?” Powers said.

The Chernobyl accident in Ukraine happened in 1986. By then, Sandia was known for its nuclear safety work and started getting phone calls almost immediately after the accident, he said.

The International Atomic Energy Agency established a Nuclear Safety Advisory Group on Chernobyl and Powers consulted with the Soviet scientists for the group. He also wrote a 10-year review of the radioactivity released in the accident.

From 1988-1991, Powers was a member of the then-DOE Advisory Committee for Nuclear Facility Safety, which later became the Defense Nuclear Facilities Safety Board. He was responsible for the development of safety research programs for the DOE’s nuclear facilities.

Three years later, he was appointed to the NRC’s Advisory Committee on Reactor Safeguards. He served as chairman in 1999 and 2000, received a Distinguished Service Award in 2001 and will continue to serve until 2018.

“Another dimension of Dana’s enormous contribution to the world of reactor safety and to Sandia has been the time and energy he has invested in mentoring the next generation of Sandia researchers,” Davies said. “He has coached, critiqued, challenged and encouraged both staff and managers, stimulating them to move to greater levels of technical understanding and personal impact.”

Working for so many years to improve nuclear power safety, Powers still seems fascinated with the subject. “Nuclear power is amazing; man’s great discovery,” he said. “It’s a tremendous resource. It has all kinds of advantages, it doesn’t matter what the weather is or whether it’s day or night.”

When it comes to safety, much progress has been made on nuclear power plants, he said.

“They are certainly vastly safer than what we had prior to TMI. There’s no question about that. They run better and they operate more efficiently,” he said.