Trio of Sandia women recognized as leaders in STEM, diversity

Chemical engineers Carol Adkins and Justine Johannes each received a Women Worth Watching in STEM Award and were recently profiled in the special STEM (science, technology, engineering and math) edition of the journal.

“Collectively, these leaders are breaking barriers for women in STEM careers and we are honored to recognize them as well as the companies supporting them,” said journal publisher James R. Rector. “Supporting women in STEM is an essential part of a worldwide strategy to innovate, educate and build a more connected world.”

Diversity Officer Esther Hernandez was honored with a Women Worth Watching award and is profiled in the journal’s current edition.  The award has recognized leading women executives for 16 years. 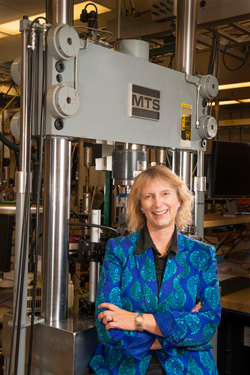 Sandia National Laboratories’ Carol Adkins believes women can move forward in STEM with continued efforts to improve awareness of the need to encourage and support them at every level. (Photo by Randy Montoya) Click on the thumbnail for a high-resolution image.

Serving as the director of Sandia’s New Mexico Energy and Geoscience Center, Carol Adkins oversees solar, wind, hydro, grid, nuclear and fossil energy programs at the labs for the Department of Energy.

Throughout her almost 30 years at the labs in various positions and fields, Adkins said she has seen fewer women in her current field of renewable energy. “I see it particularly in the wind industry. If there are 500 men at a meeting, I estimate there may be only five women,” she said.

Those numbers are not surprising to Adkins. She attended the University of New Mexico, where she received a bachelor of science in chemical engineering, and went on to earn a doctorate in chemical engineering from the California Institute of Technology. “There were 15 students in my undergrad program and only two or three of them were female. At Caltech there were double the amount of students in my year, but the number of women stayed the same,” Adkins said.

Adkins believes women can move forward in STEM with continued efforts to improve awareness of the need to encourage and support women, and girls, at every level and by “renewing public consciousness and understanding of the role of engineering and science in furthering our humanity.”

She said, “I entered my technical profession very conscious of my unique position as a woman, and I learned to survive and thrive by behaving like the majority demographic, the white males with whom I worked. Constantly left out of the ‘boys club,’ I learned to make my own networks and support the women around me.”

In 1987, she was hired by a female manager and she does not take for granted the position she is in now — to hire the most qualified and technically proficient professionals in their fields, regardless of gender, and to assure a broad reach.

“I would like to see small, steady increases in women participation in STEM. Making major institutional and cultural changes quickly risks sustained progress, but if we can all keep the big picture in mind while we take small actions in our spheres of influence, we can move forward collectively,” she said.

Adkins serves as a mentor to a Caltech female graduate and numerous Sandia women. In 2015, she was named a UNM Distinguished Alumna of the School of Engineering.

Justine Johannes has always been uncomfortable with the idea of being recognized as a woman in STEM. The director of Sandia’s Asset Security and Weapons of Mass Destruction Response Center would prefer to be judged solely for her technical contributions. “As I have gained experience — I have gotten older — I have softened that position. I recognize the benefit of celebrating all types of successes. I was flattered to be acknowledged as a woman making technical contributions while also celebrating a growing peer group of women in STEM,” she said. 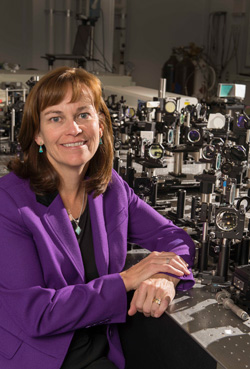 Justine Johannes of Sandia National Laboratories has seen the number of women in management positions nearly triple since serving as the engineering sciences director. (Photo by Randy Montoya) Click on the thumbnail for a high-resolution image.

To close the gender gap in STEM fields, Johannes said two important issues must be addressed. The first is keeping girls engaged in math and sciences in kindergarten through 12th grade, noting that “it’s hard for them to move into STEM fields if they don’t have a sufficient background to be successful.” Reaching a tipping point where young girls see themselves as having peers and a community of women to engage in their jobs is the second.

“I am a big believer in helping to create a sense of community amongst the women in an organization so they have help supporting each other.” Johannes said. While serving as the director of engineering sciences, she saw the number of women in management positions nearly triple. “I believe a big part of this change was a sense of community that was created.”

She expects the number of women in STEM fields to continue to increase and hopes to see more women in engineering fields typically dominated by men. “When you focus specifically on women in STEM, studies have indicated that women are significantly motivated by their ability to contribute to the well-being of society. I’ve experienced, firsthand, the technical contributions Sandia makes to our nation’s security; they are incredibly compelling and provide an opportunity to contribute to society.”

Earlier this year, Johannes was one of five alumni to receive the Distinguished Graduate Award from Cockrell School of Engineering at the University of Texas at Austin. Of the honor, Johannes said, “Ultimately, I would not have been given this award without Sandia’s support of academic partnerships. The ability to work with universities to conduct research and attract talent enabled me to stay connected to the university long after I had graduated.”

“Very early in my career, I recognized the significance that the work environment plays in engaging employees as we come to work each day. I had jobs in which I truly felt like I was part of something important, and that energized me. I have also had some jobs where it was difficult to bring myself to bring my full self into work every day,” Hernandez said. “I didn’t feel focused and creative.” 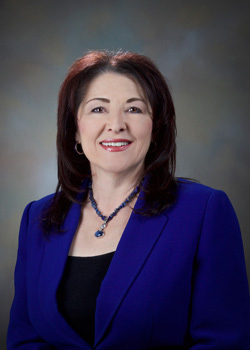 Even with the right environment, becoming a leader did not happen without support and guidance. “I had great mentors and champions throughout my career, and I feel strongly that it is my responsibility to give back in the same capacity,” Hernandez said. She is actively involved in mentoring several early and mid-level career employees.

Shortly into her management career, Hernandez found herself facing an obstacle that undoubtedly shaped the leader she is today — her limited understanding of how her social style impacted her leadership style.

“As a ‘driving expressive’ I can be pretty intense when dealing with high pressures and short deadlines,” she explained. At the time, she had “an incredibly diverse and capable team that worked well together and had a high level of trust.” One of the team members approached Hernandez and asked if they could speak privately. In their closed-door meeting, she was surprised at what she heard. “She shared with me that she very much enjoyed working with me — except when we were under a lot of pressure. She explained that her style was much more amiable and analytic, and when I operated with her from a driving perspective she couldn’t function at her best.

“The message was not easy to hear but that advice, from a courageous and genuine employee, has served me well my entire career,” said Hernandez, who has been at Sandia since 1986.

In summing up her feelings about her career, she said, “When we love something we are good at, it doesn’t really feel like work.”