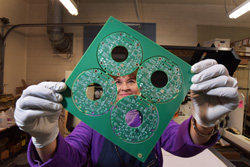 Judy Ortiz Rizek is owner and president of The Circuit Shop in Albuquerque, a small, woman-owned business that contracts with Sandia National Laboratories. Rizek says being a Sandia supplier has helped her company grow in size and skill. “Sandia is amazing,” she says. “It has given us every opportunity in the circuit board industry. The lab stretches us to become better and better.” (Photo by Randy Montoya) Click on the thumbnail for a high-resolution image.

ALBUQUERQUE, N.M. — Sandia National Laboratories spent roughly $983 million on goods and services in fiscal year 2015, up nearly $21 million from the previous year, and New Mexico businesses received more than $381 million, or 39 percent of the total, according to the labs’ latest economic impact report.

Compared with fiscal year 2014, spending was up more than $19 million with New Mexico businesses and about $18 million with the state’s small companies. Total U.S. small business spending increased about $64 million.

“These numbers show that Sandia continues to be a driving force in New Mexico’s economy,” said Don Devoti, manager of the labs’ Small Business Utilization Department. “We continue to set aggressive small business and supplier diversity goals and work diligently to meet or exceed those goals.”

Sandia reaches out to local businesses through a variety of programs. It holds public forums with suppliers and civic leaders to discuss contracting opportunities and lists contracts on its Business Opportunities website. It provides information to small and diverse business owners about doing business with Sandia and seeks qualified suppliers. 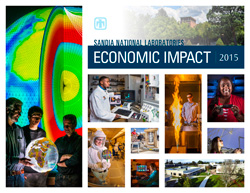 The 2015 Sandia National Laboratories Economic Impact report breaks down Sandia’s spending and spotlights its role in the economy. The 2015 data, reflecting actual payments made, is based on Sandia’s fiscal year from Oct. 1, 2014, to Sept. 30, 2015. The report demonstrates Sandia’s continued commitment to small business, Devoti said.

“During the current fiscal year, Sandia procurement and our small business team are driven to exceed all our negotiated small business and supplier diversity goals, the standard by which our program is measured,” Devoti said. “We will continue to build upon our successes with HUBZone, Veteran, Service Disabled, and Small Disadvantaged businesses, where we exceeded our goals last year, to drive future success.”

Small business expenditures for fiscal year 2015 with breakouts for its New Mexico and California labs:

Sandia helps the state’s economy through the New Mexico Small Business Assistance (NMSBA) program, established by the state Legislature in 2000 to help companies with technical support from the labs. In 2014, the Sandia NMSBA provided $2.31 million in technical assistance to 197 New Mexico small businesses in 27 counties. Since 2000, it has provided more than $29 million in assistance.

Sandia employees also gave more than $6.5 million in 2015-2016 to the United Way of Central New Mexico as the largest corporate contributor to the agency.

Sandia employees contribute their time to area community groups as volunteers, supporting STEM (science, technology, engineering and math) education through a variety of programs, such as family science and math nights and engineering challenges, that reach thousands of students.

Devoti said Sandia is committed to strengthening its relationships with the New Mexico business community and building new and enduring partnerships. “Sandia National Laboratories has a long and distinguished record of encouraging and partnering with highly qualified, diverse small business suppliers who assist us in achieving our national security mission,” he said. “We are fully committed to continuing this track record and making a difference to the New Mexico economy.”

Click here for more information on procurement at Sandia Labs.