The $3.2 million FEI Titan G2 8200 is 50 to 100 times better than what came before, both in resolution and the time it takes to analyze a sample, said Kotula and Ping Lu, who are materials scientists.

The AC-STEM delivers electron beams accelerated at voltages from 80 kV to 200 kV, allowing researchers to study properties of structures at the nanoscale — crucial for materials scientists working on everything from microelectronics to nuclear weapons.

The instrument’s unique combination of X-ray detectors and very high resolution offers magnification Kotula compares to a telescope powerful enough to show two peas side by side on the moon. High-clarity slides of microstructures analyzed with the AC-STEM and fuzzy images taken by Sandia’s older analytical microscope highlight the new capabilities. An analysis that took seven minutes on the AC-STEM took two hours on the older instrument, he said.

Kotula and Lu operate the microscope from a basement lab adjacent to the environment-controlled room that houses it. They’re not in the same room because the instrument is so sensitive even clicking a computer mouse against a desk would cause an image to jump, Lu said.

“At the atomic scale, it doesn’t take too much,” Lu said. 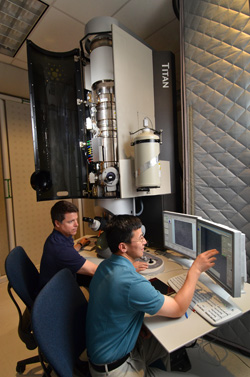 Principal investigators Paul Kotula, left, and Ping Lu of Sandia National Laboratories show off the Labs’ new aberration-corrected scanning transmission microscope, which has a unique combination of X-ray detectors and very high resolution and is capable of doing analyses in far less time than its predecessor. (Photo by Randy Montoya) Click on the thumbnail for a high-resolution image.

The remote operation affords another advantage: researchers at Sandia’s California site can run it from 1,000 miles away, which they demonstrated in March. Kotula jokes the only things they can’t do from the California site are load the sample and fill the liquid nitrogen that cools the machine.

Sandia’s AC-STEM is the first commercial unit fielded, based in part upon development funded by a Department of Energy Basic Energy Sciences project to develop advanced electron microscopes based on aberration-correcting optics. The Transmission Electron Aberration-corrected Microscope, or TEAM project, was a collaboration of the Argonne, Brookhaven, Lawrence Berkeley and Oak Ridge national laboratories and Frederick Seitz Materials Research Laboratory.

For example, the smallest impurities or structural defects hurt performance in super thin microelectronics layers, he said. In the same way, interfaces in a weapon are critical because that’s where impurities tend to show up, “where you might get some sort of separation or corrosion or reaction happening that’s the basis of aging of these materials,” he said. “Being sensitive to that lets us help others predict lifetimes, replacement intervals or failure modes so we know what to look for.”

It takes powerful instruments to do those studies.

“You need this kind of tool to quantify it,” said Lu as he sat in front of a computer screen showing an image of a 50-nanometer-thick specimen inside the AC-STEM, a sample 2,000 times thinner than a human hair.

What looks like a close-up of mesh or lattice on the screen is really an image of 3-angstrom atomic spacing between titanium and strontium. An angstrom equals one-tenth of a billionth of a meter.

Older instruments were limited by lens aberrations, particularly spherical aberration that prevents sharp focus because electrons off the optical axis are focused more strongly than ones near the optical axis, Kotula said. The AC-STEM’s additional lenses and computational elements eliminate such problems, he said.

“With the aberration-correction technology, you can open the aperture up and keep all those electrons focused to a nice point on your sample,” he said. 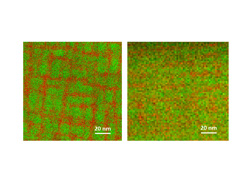 The image on the left was captured in seven minutes at 0.5nm/pixel with Sandia's new AC-STEM; the image on the right was captured in 120 minutes at 2nm/pixel with the old microscope. The analytical power of the AC-STEM is at least 70 times better than the older analytical microscope at Sandia. These high-resolution chemical images are confirming predictions from the 1970s regarding the atomic-scale characteristics of electrical contact materials. (Image courtesy of Sandia National Laboratories) Click on the thumbnail for a high-resolution image.

High electron-beam currents can damage some samples. However, “you can easily back off on the intensity” of the AC-STEM’s beam because it has so many adjustable parameters, Kotula said.

A dark spot that looks like a hole in Lu’s sample indicates damage, but it’s deliberate as he sputters atoms from the sample with a 200 kV electron beam, knocking atoms out of the lattice to measure how removing part of the sample affects the X-ray signal.

The AC-STEM also studies material in the micron world. Although a hundred microns is about the smallest size a human eye can see, it’s a huge scale for a transmission electron microscope.

At the micron level, “we’re not making such a fine beam anymore but we’re using the collection efficiency and the bright electron source to be sensitive to small concentrations,” Kotula said. “That’s very important for a lot of our customers who are looking for impurities in some of these materials.”

The room that houses the microscope has to retain stability in vibration, acoustics, temperature and electromagnetic fields. Acoustic and chilled water panels line the walls, and the room’s 65-degree temperature varies less than two-tenths of a degree Fahrenheit over half an hour. The instrument’s accelerator, capable of producing 200,000 volts, is stowed behind acoustic drapes in a corner to isolate vibrations from the 9.5-foot-tall column containing lenses and the instrument’s in-lens X-ray detectors.

Theories about aberration-correction were published in the 1950s but computers were in their infancy and no one could manually adjust microscopes that required multiple alignments and mechanical and power stability, Kotula said.

“This new transmission electron microscope is now the flagship of our departmental capabilities that include professionally maintained, state-of-the-art equipment in all types of bulk material analysis — gas, liquid, solid — and microstructural characterization, including electron optics, diffraction and spectroscopy,” said manager Jim Aubert.

The AC-STEM offers endless potential for collaboration with colleagues at Sandia and other national laboratories, companies and universities since they don’t have to be on site to participate, the researchers said.

“Other colleagues can go online and look over your shoulder virtually,” Kotula said.