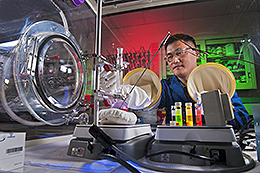 Sandia National Laboratories’ Hongyou Fan works with nanocoatings in his lab. (Photo by Randy Montoya) Click on the thumbnail for a high-resolution image.

ALBUQUERQUE, N.M. — Sandia National Laboratories researcher Hongyou Fan has been selected by the Materials Research Society (MRS) and the Kavli Foundation to deliver the 2015 Fred Kavli Distinguished Lecture in Nanoscience.

Fan is the first lecturer identified with a national laboratory to be so honored.

“I am glad that I have an opportunity to promote and enhance Sandia’s reputation as a leading research institute,” he said.

Manager Bill Hammetter said, “Being selected to deliver the Kavli lectureship is a high honor from MRS.”

Fan’s opening keynote address will be delivered at 7 p.m. Monday, April 6, at the Marriott Marquis in San Francisco. This talk is open to media who have registered to attend the MRS Spring Meeting.

Fan’s pioneering research in the field of nanoparticle assembly and integration has supported a shift from nanoscience discovery to practical nanotechnologies.

His talk, “Nanomaterials under Stress: A New Opportunity for Nanomaterials Synthesis and Engineering,” will discuss his stress-induced fabrication method that applies mechanical compressive force rather than chemistry to create new nanomaterial arrays with precisely controlled structures and tunable properties. 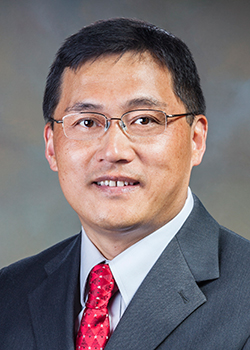 Sandia National Laboratories researcher Hongyou Fan to give the 2015 Fred Kavli Distinguished Lecture in Nanoscience. (Photo by Stephanie Blackwell) Click on the thumbnail for a high-resolution image.

“By manipulating nanoparticle coupling through external pressure instead of through chemistry, a reversible change in their assemblies and properties can be achieved and demonstrated,” said Fan. “In addition, once past a certain threshold, external pressures force these nanoparticles into contact, thereby forming one- to three-dimensional nanostructures without relying on traditional processes where atoms and ions are locked in a specific crystal structure. Therefore, their architecture can be readily tuned to produce desirable properties for practical applications.”

Fan is a distinguished member of the technical staff at Sandia. He received a bachelor’s degree in chemistry in 1990 from Jilin University, China, a master’s degree in polymer chemistry and physics in 1995 from the Chinese Academy of Sciences, and a doctorate in 2000 from the University of New Mexico in the field of nanoporous materials and composites.

His current research focuses on the development of new synthesis methods and self-assembly processes to fabricate multifunctional nanomaterials for applications in nanoelectronics, photonics and energy storage.

The Kavli Foundation supports scientific research and promotes public understanding of scientists and their work, with particular emphases on astrophysics, nanoscience and neuroscience. The first Fred Kavli Distinguished Lectureship in Nanoscience was presented at the 2007 MRS Fall Meeting, at which Sir Harold Kroto of Florida State University, winner of the 1996 Nobel Prize in Chemistry, presented a lecture entitled “Nanoscience, Science, and Sustainability,” to an overflow audience of nearly 1,000.