ALBUQUERQUE, N.M. — Sandia National Laboratories researchers Jim Martin and Kyle Solis have what Martin calls “a devil of a problem.”

They’ve discovered how to harness magnetic fields to create vigorous, organized fluid flows in particle suspensions. The magnetically stimulated flows offer an alternative when heat transfer is difficult because they overcome natural convection limits. Martin and Solis even demonstrated a heat transfer valve that could potentially control the temperature of computer processors.

But they’re not sure how and why the flow patterns occur, although clearly it’s a complex scientific behavior stemming from fundamental phenomena.

“Just because an effect is easy to generate doesn’t mean that it’s going to be easy to understand,” Martin said.

It’s also a tough problem to simulate because of the huge scale of the flow patterns compared to the tiny particle size, he said. He and Solis, a Student Intern Program doctoral researcher, have been generating flow patterns in magnetic platelet suspensions for about three years. They published a paper in 2010 in the American Institute of Physics’ Applied Physics Letters and another paper in 2012 in the Royal Society of Chemistry’s journal Soft Matter, outlining how they created flow patterns. Martin led a topical review, called “Driving self-assembly and emergent dynamics in colloidal suspensions by time-dependent magnetic fields,” for the international journal Reports on Progress in Physics in November. 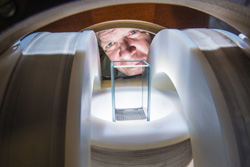 Sandia National Laboratories researcher Jim Martin peers between specially built magnets as he prepares an experiment that will show patterns forming in a liquid inside a 3-centimeter (1.2-inch) container. He and Sandia doctoral researcher Kyle Solis have discovered how to harness magnetic fields to create vigorous, organized fluid flows in particle suspensions. (Photo by Randy Montoya) Click on the thumbnail for a high-resolution image.

The pair’s research, funded by the Department of Energy’s Office of Science, is concentrating on extending fundamental understanding of novel heat transport in liquids, evaluating the effectiveness of various flows and exploring what happens when researchers modify experimental parameters. Martin and Solis found the patterns occur only for magnetic particles shaped like plates, essentially magnetic confetti. Spherical and rod-like particles don’t produce the effects.

The goal is making fluid flow on its own, as in thermal convection. Convection is familiar to everyone who boils water or marvels at birds or gliders riding on rising columns of warmer air known as thermals. However, it doesn’t work in outer space where there’s no gravity or in a liquid that’s beneath rather than above a hot object. The modern world forces convection by using pumps and fans with associated seals and valves in contact with the fluid, but sooner or later those moving parts corrode and break down.

Martin and Solis make fluids move by adding a small amount of magnetic platelets to a liquid and applying modest, uniform alternating current (AC) magnetic fields. The phenomenon, which they’ve termed isothermal magnetic advection, has shown very good results for noncontact heat transfer, and would be useful for cooling microsystems, cooling in microgravity or for transferring heat in circumstances that prevent convection, they said.

“We don’t have a lot of understanding of why these things occur, but we can determine what the effects are and how well it works,” Martin said. The ongoing experiments, coupled with modeling, are advancing the understanding of the phenomena.

Because a uniform magnetic field can be easily scaled to any size, he said, the technology could be practical in problems ranging from reactor cooling to microfluidics, a multidisciplinary field used, for example, in designing systems that handle minute volumes of fluids, such as blood samples.

The researchers discovered various flow patterns they call advection lattices. “The patterns are pretty remarkable because it’s not easy to understand why the fluid should flow in the first place because a uniform magnetic field does not exert a force on a particle, just a torque,” Martin said.

He compared the flow lattices to the patterns, or murmurations, of flying, wheeling flocks of birds, with “every bird obeying some simple rules like avoiding crashing into neighboring birds. There’s no leader. These patterns just spontaneously emerge from these simple rules. That’s more or less the same thing here. Each particle is obeying simple rules but collectively there’s this emergent behavior that’s quite surprising.”

Specially built magnet generates uniform field It’s not necessary to use very strong magnetic fields for the fluid flows. The researchers generate a uniform multiaxial AC magnetic field with a specially constructed magnet consisting of three nested pairs of coils arranged to create three mutually perpendicular magnetic fields. Imagine a rectangular box with a wire coil glued to each of the six sides. Coils on opposite sides are wired together and produce a field directed along their cylindrical axis. The arrangement enables researchers to create magnetic fields with independent frequencies along the north-south, east-west and up-down directions simultaneously.

The net effect is a magnetic field whose direction and magnitude vary wildly and rapidly with time.

Normally a magnetic field is constant in magnitude and direction like the magnetic field of the Earth. Martin and Solis, on the other hand, use alternating magnetic fields ranging from about 50-1,000 hertz (Hz), or 50 to 1,000 cycles per second. Only two field components are needed to create flow fields, but three can create especially vigorous flows.

They demonstrated patterns in their lab, first with a fluid suspension containing a small percentage of magnetic platelets by volume and then with a much denser suspension. Platelets start out as disorganized sediment, but when the field is applied patterns emerge immediately, their structure dependent on the magnetic field used. Martin and Solis described various patterns, their features mere millimeters in size, as looking like worms slithering by each other, tadpoles swimming upstream, fishing nets, sand ripples, ridges or a lattice of rivers. One pattern wriggles as if tiny bugs moved underneath.

Martin points out not all the “rivers” in the lattice flow in the same direction: Cutting through the fluid would reveal a checkerboard pattern of flow columns, some going one way and adjacent columns flowing the opposite.

“It’s an enigmatic phenomenon,” he said as he used a tiny light to illuminate the 3-centimeter (cm) or 1.2-inch square glass container of fluid sitting in the middle of the magnets. 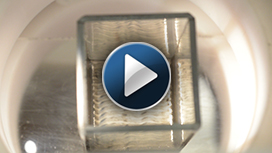 Sandia National Laboratories’ Jim Martin and Kyle Solis explain research on the effects of magnetic fields on fluid flows and how they stimulate vigorous flows. Fluid flow is a necessary phenomenon in everything from reactors to cooling engines in cars. Click on the thumbnail to view a description of the research on YouTube.

The demonstration started with one coil pair running at 150 Hz and a second set at 75 Hz. Solis changed frequencies by computer, and at one point introduced a slight frequency change in one field component to continuously modulate the flow pattern.

“The sample will go through all these transformations,” Martin said. “In any one moment it’s trying to become what the field is directing it to become, but now the field is continuously changing, causing the pattern to evolve. In other words, there are lots of patterns that are possible and we can select these by carefully adjusting the phase angle between field components.” One pattern was a vortex lattice of micro-tornadoes spinning in the opposite direction of their neighbors. Martin explained it this way: Suppose you had a checkerboard with a gear mounted on a shaft in the middle of each square. If you turn a gear clockwise in the lattice of meshed gears, its four neighbors turn counterclockwise, and each of their neighbors turns the opposite direction and so on.

“This is the same kind of thing but it’s all a fluid,” he said.

Solis changed the experiment’s parameters by diluting the fluid with more solvent, in this case isopropyl alcohol, or by removing most of the solvent. He also dialed the magnetic strength up and down. Some patterns moved rapidly, even violently, and the solution can suddenly crawl up the sides and spill out. At one point, Solis shut off the field and the fluid showed a ghostly remnant of the previous pattern. The flow immediately resumed when the field restarted.

Martin and Solis used the phenomenon to create a heat valve they can control to transfer or block heat. They made flow cells a few inches long with blocks on the outside walls through which water flows to keep the blocks cold. The water blocks flank a chamber divided by a razor-blade-size heater made of plastic embedded with wire. To test thermal transfer properties, the researchers run current through the heater and measure how hot it gets. Since the temperature depends on the heat transfer properties of the chamber’s magnetically structured fluid, they control the temperature by controlling the flow created by platelets in the magnetic field.

Some fields effectively solidify the fluid and cause the heater to become very hot, while others create strong flows so efficient in extracting heat that the temperature of the heater rises only 0.3 degrees C (about 0.5 degrees F) higher than the water block temperature, Martin said.

Thus it acts like a valve because it can control the transfer of heat over a 1-cm gap by a hundredfold, he said. “Think of a water valve that can control water flow by a factor of 100 — perhaps a little leaky, but still better than no valve.” There’s still room for improvement, he added.

“Heat transfer can be controlled over any size volume, and the relative efficiency of heat transfer actually increases with scale,” Martin said. “It’s easy to create heat transfer over a large volume because the coils that produce magnetic fields are equally efficient at any size.”

Isothermal magnetic advection could help efficiently manage overheating in computers. The chips in modern supercomputers run ever hotter and use more power, and drawing heat away from them is a technical challenge that’s limiting development, Martin said. And it’s not just large systems. “One of the limitations for cooling right now on personal electronics like laptops is just how fast people can run the fans inside of them before the noise becomes too obnoxious,” Solis said.