The award recognizes agency and/or laboratory employees from at least two organizations who together did outstanding work in transferring technology. The winning partnership included Sandia, the Space and Naval Warfare Systems Command (SPAWAR) Systems Center Pacific (SSC Pacific) and the Department of Homeland Security (DHS) for their work in cargo container security. 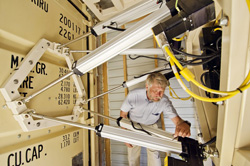 Sandia National Laboratories engineer John Dillinger tests the security of a cargo container. He says the Federal Laboratory Consortium partnership award reflected the efforts of more than 100 Sandia researchers at various times. (Photo by Randy Montoya) Click on the thumbnail for a high-resolution image.

The team developed, tested and evaluated new cargo security technologies to meet DHS and Department of the Navy requirements. Since 2001, DHS has been required to secure the storage and transportation of cargo entering and traveling through the United States against terror attack, introduction of contraband cargo and pilferage. The Navy must ensure, at all times, the security of high-value cargo, such as munitions, that it stores and transports around the world.

The research done under the partnership resulted in five invention disclosures and four U.S. patent applications.

“Congratulations to John, Steve and their entire team for winning both regional and national Federal Laboratory Consortium awards for this important work to secure our borders,” said Jackie Kerby Moore, manager of  Sandia’s Technology and Economic Development Department and the labs’ representative to the consortium. “It’s very exciting when Sandia is recognized alongside our partners for successful technology development and commercialization.”

Dillinger said the project started in late 2004 and that more than 100 Sandia researchers were involved at various times. “All their efforts contributed to this award,” he said. “The goal was to enhance U.S. air, land and maritime border security through the transition of scientific and technical knowledge, ultimately providing standards and solutions for the global supply chain industry. The team’s challenge from day one was to enhance security and improve the flow of commerce.”

The consortium is a nationwide network of more than 300 members that provides a forum to develop strategies and opportunities for linking laboratory mission technologies and expertise with the marketplace. Its awards program annually recognizes federal laboratories and their industry partners for outstanding technology transfer efforts and has become one of the most prestigious honors in technology transfer. Since established in 1984, the consortium has presented awards to nearly 200 federal laboratories.

“We are thrilled to have won this partnership award with SPAWAR SSC Pacific and DHS,” Kerby Moore said. “Partnerships with government, academia and industry are crucial to Sandia’s efforts to deploy technology for the public good.”