Sandia work at the heart of next generation nuclear reactor

LIVERMORE, Calif. — A team of Sandia National Laboratories researchers working on the reactor at the DIII-D National Fusion Facility is testing materials to make the next generation of fusion reactors, in the quest to develop more carbon-free energy sources.

These magnetic confinement fusion reactors, called tokamaks, use magnetic fields to shape plasma into a donut shape that generates power from nuclear fusion. DIII-D is the largest such facility currently operating in the Department of Energy complex. Tokamaks create high heat and particle fluxes that can cause significant erosion of the reactor wall materials. If these materials contaminate the core plasma, it could make it impossible to bring the reactor to a temperature high enough to start stable, safe fusion. 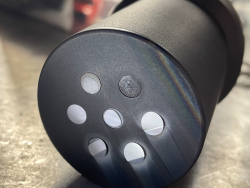 A team of Sandia National Laboratories researchers is testing materials to make the next generation of fusion reactors. This container is used to expose the samples to nuclear fusion. It holds seven samples of innovative tungsten alloys, post exposure. (Photo by Jonathan Coburn.) Click on the thumbnail for a high-resolution image.

Jonathan Coburn is one such researcher, part of a team of Sandians that collaborates with DIII-D to test and develop much needed specialized fusion materials for the hot fusion plasma environment.

“Plasma-material interactions deal with what effects the ions and electrons from the plasma have on a material and vice versa,” Coburn explained. “Magnetic confinement fusion devices use very strong magnetic fields to generate and then confine the plasma, and so all of these ions and electrons are interacting and producing fusion energy. Inevitably, you have exhaust from the plasma that ends up impacting the walls of your vessel.”

The different plasma-facing components of such a reactor are made of materials like tungsten, carbon and beryllium, which interact differently when irradiated by ions and electrons.

Jonathan and the team perform physical and computational experiments to test material erosion, macroscopic damage, gas retention, and recrystallization for tungsten samples after those high-energy interactions. Not only must the team figure out how the materials are damaged by the fusion environment, it must also understand how the energetic byproducts of these plasma interactions are retained in the exposed material.

Now, all of this work to make fusion power generation safer and more reliable is being incorporated into the next generation of tokamak reactors. The best example is the ITER tokamak being constructed in France. ITER, meaning ‘the way’ in Latin, is the largest such reactor ever constructed. For 50 megawatts of input heating power, ITER will be able to generate 500 megawatts of output power. The team’s work is going to impact that project and help ensure ITER’s success in producing safe, reliable net fusion energy.

“A lot of the earlier work that was done on DIII-D contributed greatly to the overall design of the ITER tokamak,” Jonathan said. “It’s pretty exciting to be able to have the opportunity to do these high-level, high-stakes experiments for the DOE and to advance fusion energy sciences. It’s just a really satisfying feeling for sure.”