ALBUQUERQUE, N.M. — Sandia National Laboratories is being recognized by the Department of Energy and the Green Building Council for its efforts to support green and sustainable building and construction regarding a new data center addition to its high-performance computing facility. Water rushes through tubes and computer racks, providing a warm-water cooling system and keeping the high-performance computers from overheating at Sandia National Laboratories’ newest data center. (Photo by Bret Latter) Click on the thumbnail for a high-resolution image.

The recognition “is a great milestone for the Labs,” said David Martinez, engineering program and project lead. “LEED certification is something that I had a vision for 20-plus years ago, and we have been working on it for some time, so being one of the first data centers to receive the sustainability award is quite an honor.”

LEED, or Leadership in Energy and Environmental Design, was developed by the Green Building Council in 1993 to measure and define green buildings, providing a roadmap for developing sustainable buildings and establishing a baseline for reducing environmental impact. 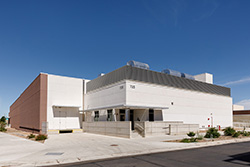 The newest data center on Sandia National Laboratories’ Albuquerque campus features a minimalist exterior with water-wise landscaping and an efficient design. (Photo by Bret Latter) Click on the thumbnail for a high-resolution image.

Martinez, who spent several years at the DOE’s National Renewable Energy Laboratory, helped design a LEED Platinum-certified high-performance computing data center at the lab in Golden, Colorado. Using that experience, he worked with other team members with Sandia’s data center services and facilities management and engineering to design, build and operate Sandia’s data center as a LEED-certified building.

LEED certification is a lengthy process with stringent guidelines. Buildings are evaluated on a point system, earning points for various green building strategies to achieve one of four LEED rating levels: Certified, Silver, Gold or Platinum. Prior to earning the certification, a building must operate and function for up to two years to make sure all green design and build goals are met. The building also must demonstrate continued operational sustainability to retain the certification. 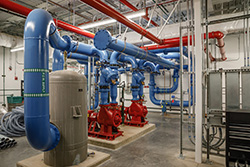 Water runs through large, uninsulated pipes, part of the processing system that provides cooling direction into the computers via the cooling distribution unit at Sandia National Laboratories. (Photo by Bret Latter) Click on the thumbnail for a high-resolution image.

Funded by the DOE, the data center was completed in October 2018, and LEED certification took 14 months to achieve. This is the first certification earned under Sandia’s LEED v4 Campus effort.

Sandia has four corporate data centers. This data center is home to the labs’ Astra and Vanguard high-performance computing systems.

Such systems consume substantial amounts of energy to perform the large-scale computations required by these supercomputers. A biproduct of that energy consumption is a substantial amount of heat, requiring stringent cooling regimens to keep the computers running.

While typical home or office computers rely on built-in fans to cool internal systems, supercomputer data centers must provide massive cooling power for their banks of servers. Historically, cooling to this magnitude results in high water and energy usage. To increase efficiency and conservation, numerous green building strategies and innovative systems were implemented in the data center to get it to the LEED Gold level.

Some of these innovations and strategies include:

“From the beginning, our goal was to design and build to get the Gold certification. Approximately 25%-30% into the design, we sent out to bid for a contractor and engineer to keep us focused on the certification goal requirements and where we could get points for certification,” Martinez said.

“We designed based on what we needed and wanted for energy efficiencies,” Martinez said. “Verdacity guided us along in the design to find and earn LEED certification points.”