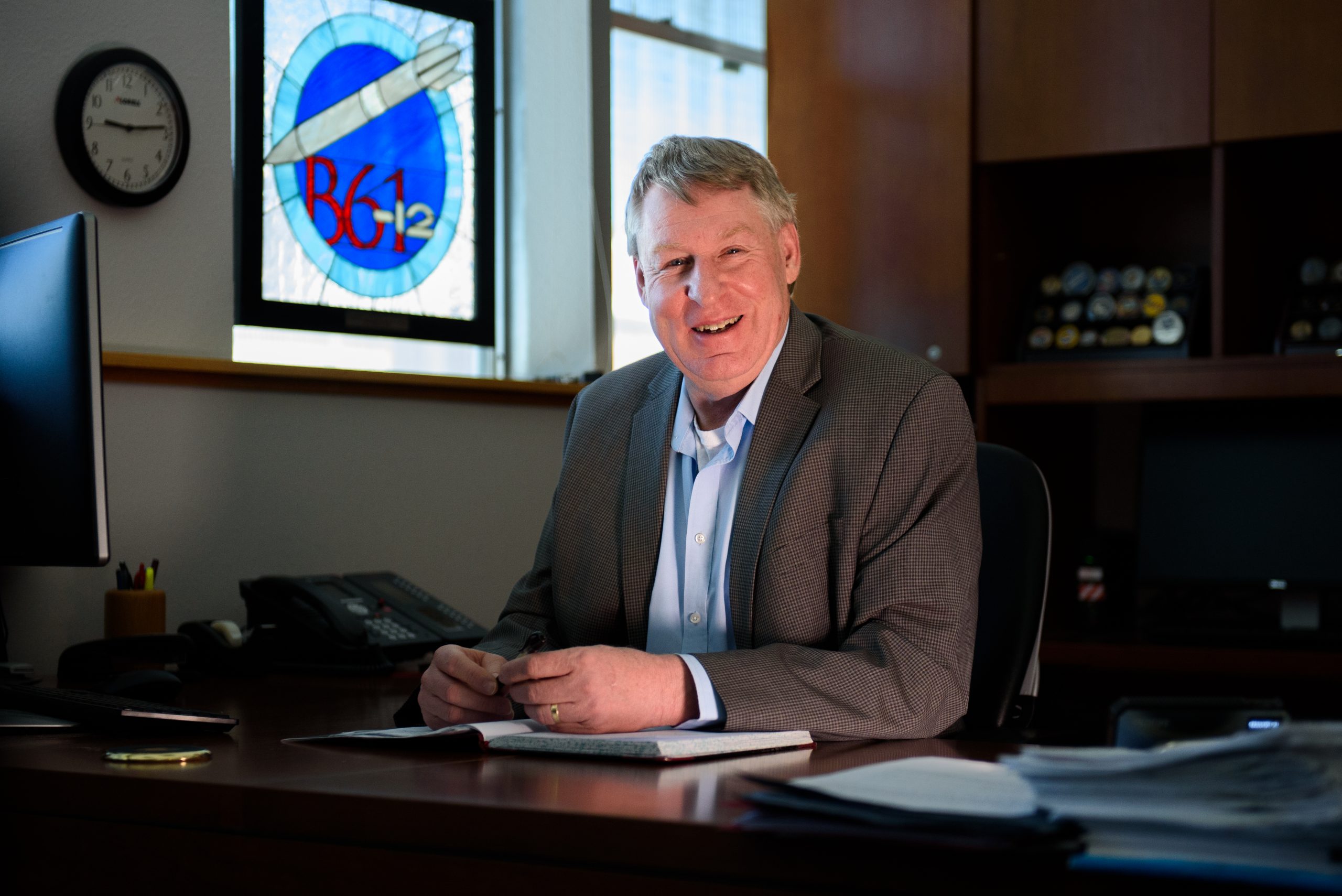 ALBUQUERQUE, N.M. — Jim Handrock, Sandia National Laboratories’ director of New Mexico weapons systems engineering, received a series of awards and commendations from the National Nuclear Security Administration, the Air Force and Navy recognizing his leadership, expertise and service to the nation during a celebration at Sandia on May 4. 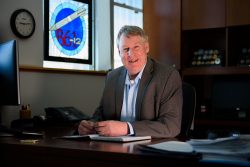 Jim Handrock led the B61-12 and W88 ALT 370 programs at Sandia National Laboratories from early designs to first production units. Prior to that he had more than 20 years of service in different assignments, mostly within the nuclear deterrence programs at Sandia’s California site. (Photo by Craig Fritz) Click on the thumbnail for a high-resolution image.

The celebration, held on Kirtland Air Force Base, marked two important achievements: the first production units for the W88 Alteration 370 on July 1 and the B61-12 Life Extension Program on November 23. During the last 11 years, Handrock led both programs at Sandia from their early design stages to the beginning of production.

With the Administrator’s Award of Excellence Gold Medal, NNSA Administrator Jill Hruby said Handrock’s contributions and achievements, particularly in delivery of the W88 ALT 370 and the B61-12 first production units, have ensured consistent leadership through significant post-Cold War transformations and have helped ensure the safety, security and reliability of the nation’s nuclear deterrent.

In a letter, Wolfe wrote Handrock has consistently pushed the nuclear security enterprise toward greater responsiveness, leading the development of novel stockpile stewardship tools and capabilities.

Dawkins extended his gratitude to Handrock for his service and expertise and wrote that his efforts were critical to enhancing the partnership between the Air Force and Sandia, ensuring the enterprise made informed decisions on matters of the greatest national consequence. 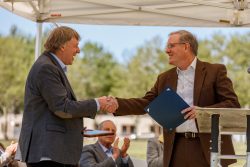 Jim Handrock was presented with the NNSA Administrator’s Award of Excellence Gold Medal by Michael Thompson, NNSA principal assistant deputy administrator for stockpile sustainment, during a May 4 celebration of the achievement of first production units for the W88 Alteration 370 and the B61-12 Life Extension Program at Sandia National Laboratories. (Photo by Bret Latter) Click on the thumbnail for a high-resolution image.

Handrock said he was very appreciative and honored to be recognized and added that he shares the recognition with the teams for both weapon systems.

“These assignments have been the most challenging and fulfilling of my career,” Handrock said. “I have truly been honored to have worked with so many talented and dedicated people along the path to this accomplishment. This is an achievement that the nation should be very proud of.”

A career in nuclear deterrence

In 2011, Handrock was asked by Labs leadership to move to New Mexico to lead the B61-12 and W88 ALT 370 programs. Prior to that he had more than 20 years of service in different assignments, mostly within the nuclear deterrence programs at Sandia’s California site.

Handrock said his first role was in gas transfer systems and was a great experience in component-level work, laying a good foundation for what would come later. Other highlights include being manager of the team that installed the operating system on Red Storm, a supercomputer, and taking an assignment based in Washington, D.C., where he was part of the first NNSA Science Council.

“From being a staff member on a weapons program to being in management and involved with everything from electrical modeling, simulation and reliability to advanced computing to structural analysis — there is a whole variety of things that you can do within your career at Sandia,” Handrock said. “What I appreciate is that I’ve been able to see the weapons program from nearly every aspect and visit partners throughout the enterprise, from manufacturing plants to attending flight tests. It was a fantastic opportunity.”

Handrock started his career at Sandia 34 years ago and said that while he is preparing to retire this summer, he still sees the same themes at the Labs that originally drew him to begin his career there.

“What drew me to Sandia still holds today — nationally important work that employees believed in and knew made a difference to the nation and the world,” Handrock said.