ALBUQUERQUE, N.M. — Satellites equipped with remote sensing technology execute many critical national security missions, from detecting explosions to tracking sea ice, but until now it could take a team years to move from a concept to a deployable space system. 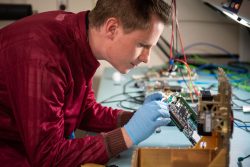 Thomas Bradshaw, electrical engineer and flight software lead, inspects a computer board for an upcoming remote sensing mission designed to demonstrate next-generation high-performance computing in space. The team used Valhalla, a Python-based high-performance computing program developed at Sandia National Laboratories, to quickly generate the concept design and estimate mission performance for the payload. (Photo by Craig Fritz) Click on the thumbnail for a high-resolution image.

Valhalla, a Python-based performance modeling framework developed at Sandia National Laboratories, uses high-performance computing to build preliminary satellite designs based on mission requirements and then runs those designs through thousands of simulations. The results of the simulations feed into an interactive multidimensional video-like view of satellites executing their mission and hundreds of plots that show the user the relationship between each of the outputs and inputs at a glance. This data enables the user to quickly find the solution that best executes the mission.

Valhalla has already been used to explore space systems for enhanced Arctic security, study the effects of neuromorphic computing on space system design, simulate tracking and monitoring a hypothetical refugee rescue mission in the Mediterranean Sea and other satellite missions.

James Meub, Valhalla project lead and aerospace engineer, said a multidisciplinary team typically takes months, or even years, to produce a preliminary design for a remote sensing satellite or to determine how existing satellites would perform during a new mission. The team writes mission requirements based on what the satellites will need to detect and observe, then optical engineers design the payload and aerospace engineers design a host vehicle.

“The ability to understand how design decisions and requirements affect these simultaneous activities is iterative, time-consuming and essential to producing a reliable solution,” Meub said. “Valhalla short-circuits this process by using high-performance computing to help the user produce a preliminary design for a satellite or space system in weeks, and it can also show how groups of nonidentical satellites with different features will perform in new combinations and scenarios.”

Increasingly, a group of small satellites working as a system instead of one large satellite is being considered for remote sensing missions, Meub said.

Designing a space system with Valhalla is similar to customizing a new car online. A project team member visits Sandia’s internal Valhalla website and selects the features and parts needed to execute the mission. The first step is to provide Valhalla with mission requirements that can be parsed into quantitative goals, including: 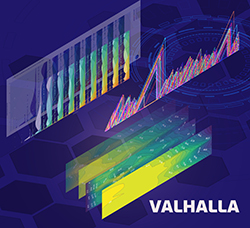 Examples of plots produced by the Valhalla framework, developed at Sandia National Laboratories, to assist in space system design analysis. (Graphic by Johanna Hartenberger) Click on the thumbnail for a high-resolution image.

With the mission requirements clearly defined, Meub said the next step is to select parts such as onboard computers, radios, batteries, reaction wheels, sensors, propulsion tanks and thrusters, and GPS receivers from a component catalog with about 2,500 parts to choose from.

Valhalla takes all the selected parts and creates a baseline satellite design by using encoded interface control documents, engineering best practices and rules-based logic, he said. It sizes the payload, structure, solar arrays and batteries, optimizes the mass of the satellite and its compatibility with various launch vehicles and generates a notional layout of components internal to the satellite.

A day-in-the-life in space

Valhalla then populates the baseline design into a group of satellites, often referred to as a constellation, and simulates the space system executing the mission by running a day-in-the-life power model simulation, Meub said. The simulation compares the mission performance metrics against space system goals and repeats that process thousands of times to find the best constellation design.

Valhalla also models the system’s orbital dynamics and the gravity harmonics of the earth, moon and sun to simulate the space environment each satellite will experience over the course of the day.

Meub said there are thousands of variables and relationships to consider when designing a space system for a specific national security mission, making the task well-suited for high-performance computing.

This video, created by Sandia National Laboratories’ Valhalla program, previews a preliminary concept for a satellite performing a remote sensing mission. (Video by Sandia’s Valhalla program) Click to watch the video or download the file.

“Valhalla visualizes the relationship between variables so the user can see how the overall space system is affected when parameters that are relevant to each other change,” he said. “For example, the desired altitude of the spacecraft will affect the size of the telescope needed and vice versa. As the altitude of the satellite increases, the telescope also needs to become more powerful, but the system will need fewer satellites to provide enough sensing coverage to execute its mission.”

The simulation data is post-processed in a graphics processing unit cluster. The GPU takes all the data from the simulation and combs through it to correlate performance metrics across variable sets to produce an N-dimensional hypersurface that provides the user with hundreds of plots, including a 3D visualization of the constellation executing its mission, revisit and collection statistics, launch vehicle compatibility and simulated satellite telemetry feeds.

“This allows users to analyze the simulation data quickly,” Meub said. “All the data in a trusted, digestible format — you can see why certain simulation runs produce better performance metrics than others. This enables teams to deliver national security solutions for some projects in months rather than years.”

Valhalla has been funded through the Laboratory Directed Research and Development program, the New Mexico Small Business Assistance program, the National Nuclear Security Administration and other government organizations.

NOTE: James Meub is the husband of writer Kristen Meub.