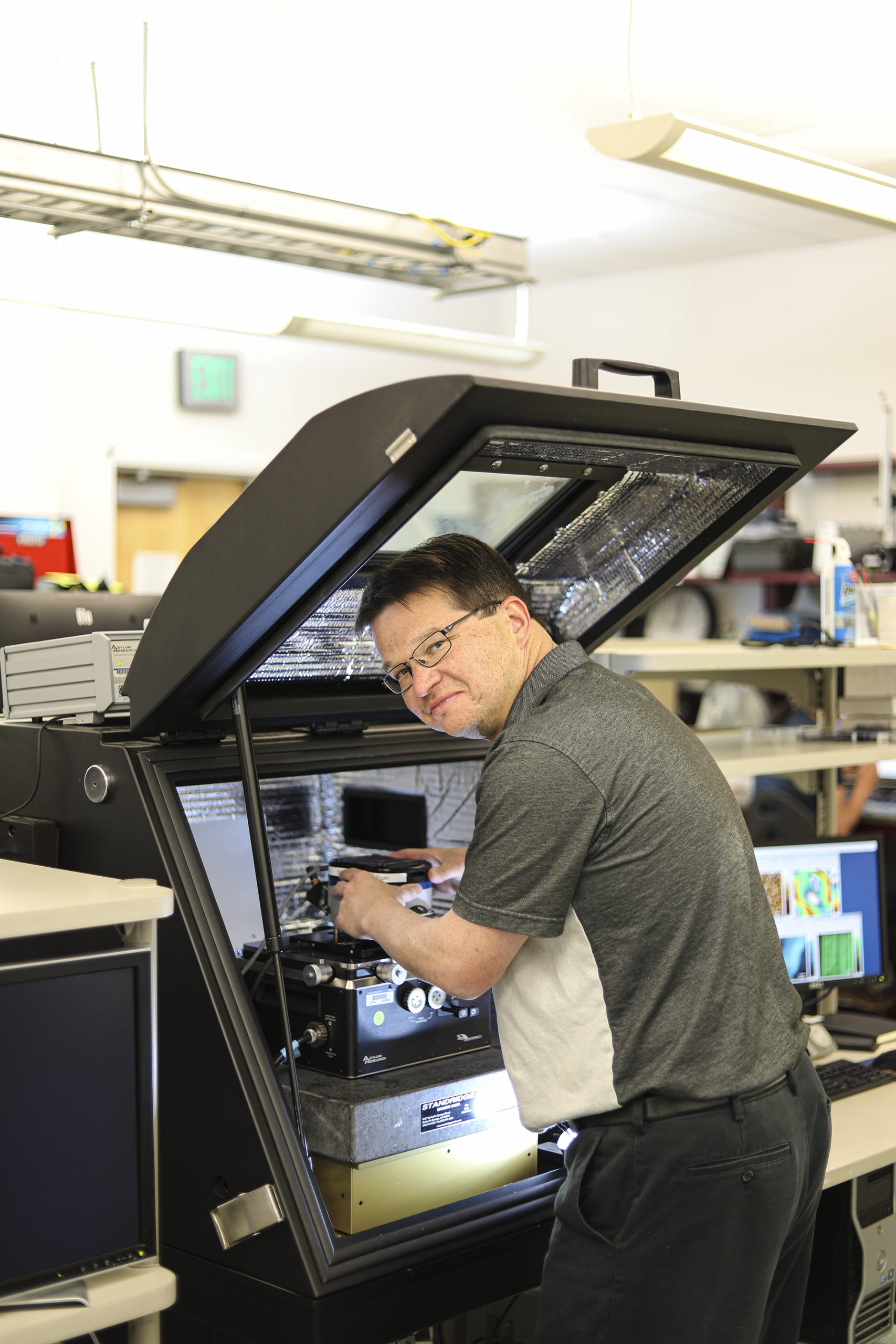 ALBUQUERQUE, N.M. — Sandia National Laboratories mechanical engineer Frank DelRio likes to think small — microscopically small. His groundbreaking work in nanomechanics and nanotribology earned him a trip to Pasadena, California, recently for the 2022 Hispanic Engineer National Achievement Awards Conference, where he was honored for his technical achievements. 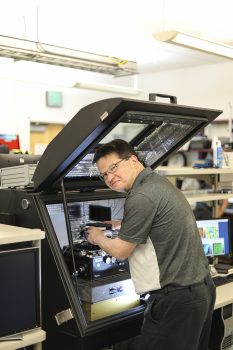 Frank DelRio, nationally recognized for his outstanding technical achievement, works with an atomic-force microscope to characterize the growth kinetics of amorphous carbon tribofilms on platinum-gold nanocrystalline alloys at Sandia National Laboratories. (Photo by Lonnie Anderson) Click on the thumbnail for a high-resolution image.

“Through nanomechanics, we look at how things deform, how they fracture, how they fatigue and respond to a mechanical stimulus,” DelRio said. “Through nanotribology, we’re moving two surfaces relative to one another, trying to understand why we see the frictions that we see and developing lubrications schemes to mitigate those affects.” He is an engineer of numerous technical achievements in assuring material and component reliability in products ranging from satellites in space to cell phones in the palms of our hands.

DelRio said that math and science pulled at him from an early age. “I’ve always enjoyed solving problems, building things and fixing things,” he said. “My mom says that as early as she can remember, I tinkered with things, trying to figure out how they work. I was constantly trying to make them better.”

This innate curiosity landed Frank in a magnet high school focused on science, technology, engineering and math. “I was lucky enough to be in the right place at the right time,” he said. “I just kind of fell into it. By the end of high school, I had already made my way through the first two or three years of typical college math. Science was the same way.”

DelRio spent the next eight years chasing a doctorate in mechanical engineering. While in graduate school at the University of Colorado, Boulder, he learned of a Sandia Labs Microsystems Engineering Science and Applications, or MESA, fellowship. He applied, was accepted and spent more than two years working with Sandia scientists on his graduate school research.

With his doctorate in hand, DelRio joined the National Institute of Standards and Technology in 2007 developing and refining standardized units of measurement at every level, from global communication networks to advanced nanomaterials and computer chips. He was enjoying his work at NIST, where he had become a project leader and group leader, when he learned of an opening at Sandia that aligned with his interests and skills. “I had relationships at Sandia from my days as an intern and even contributed to joint projects with the Labs working at NIST,” DelRio said. He returned to Sandia in 2020 as a member of the research and development technical staff in the materials science department.

DelRio spends much of his time conducting nanomechanics and nanotribology tests with his two good friends, a nano-indenter and an atomic-force microscope. “I call myself an experimentalist,” he said, “focused on nanomechanics and nanotribology, basically poking at things at very small scales and analyzing the response to those mechanical stimuli, then extracting fundamental properties of the materials that I’m looking at.

“I’ve also been working at the Department of Energy’s Center for Integrated Nanotechnologies as an affiliate scientist,” DelRio said. “Much of my work at Sandia is in electronics, but now I’m working with nano applications in renewable energy and biomedical and health and it really stretches my skills and interests,” he said. Through the Center for Integrated Nanotechnologies, DelRio works with experts at the top of their game from across the country. “It’s an amazing integration of nanoscience talent,” he said, “and a really a neat way to apply the techniques we’re developing to areas that we might not otherwise.”

DelRio’s work might seem lofty, but it has applications in everyday life. “Our work has improved the reliability of everything from satellites to smart phones and televisions,” he said.

DelRio is the recipient of scores of national awards, but this one is different. “This HENAAC award is really special,” he said. “I’m dedicating this honor to my dad. He really taught me and my sister the value of working long, hard days and going after what you want. That came from his roots, his early days in Cuba and his Hispanic heritage and family.”

He says HENAAC provides an important sense of community that brings people together and shows younger Hispanic students and professionals in STEM that it’s possible to go to graduate school and become a professor, work at a national lab or be an industry leader. “Everybody has their own challenges and obstacles in life, and groups like HENAAC provide a community of support that creates opportunities for others,” he said.