ALBUQUERQUE, N.M. — Scientists from Sandia, Los Alamos and Lawrence Berkeley national laboratories have just begun the third phase of a years-long experiment to understand how salt and very salty water behave near hot nuclear waste containers in a salt-bed repository. 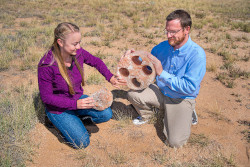 Melissa Mills, left, a Sandia National Laboratories geochemist, and Kristopher Kuhlman a Sandia geoscientist, display salt samples from their Waste Isolation Pilot Plant experimental site. They have just begun the third phase of a yearslong basic science experiment to understand how salt and very salty water behave near hot nuclear waste containers in a salt-bed repository. (Photo by Randy Montoya) Click on the thumbnail for a high-resolution image.

Salt’s unique physical properties can be used to provide safe disposal of radioactive waste, said Kristopher Kuhlman, a Sandia geoscientist and technical lead for the project. Salt beds remain stable for hundreds of millions of years. Salt heals its own cracks and any openings will slowly creep shut.

For example, the salt at the Waste Isolation Pilot Plant outside Carlsbad, New Mexico — where some of the nation’s Cold War-era nuclear waste is interred — closes on the storage rooms at a rate of a few inches a year, protecting the environment from the waste. However, unlike spent nuclear fuel, the waste interred at WIPP does not produce heat.

The Department of Energy Office of Nuclear Energy’s Spent Fuel and Waste Disposition initiative seeks to provide a sound technical basis for multiple viable disposal options in the U.S., and specifically how heat changes the way liquids and gases move through and interact with salt, Kuhlman said. The understanding gained from this fundamental research will be used to refine conceptual and computer models, eventually informing policymakers about the benefits of disposing of spent nuclear fuel in salt beds. Sandia is the lead laboratory on the project.

“Salt is a viable option for nuclear waste storage because far away from the excavation any openings are healed up,” Kuhlman said. “However, there’s this halo of damaged rock near the excavation. In the past people have avoided predicting the complex interactions within the damaged salt because 30 feet away the salt is a perfect, impermeable barrier. Now, we want to deepen our understanding of the early complexities next to the waste. The more we understand, the more long-term confidence we have in salt repositories.”

Trial-and-error in the first experiment

To understand the behavior of damaged salt when heated, Kuhlman and colleagues have been conducting experiments 2,150 feet underground at WIPP in an experimental area more than 3,200 feet away from ongoing disposal activity. They also monitor the distribution and behavior of brine, which is salt water found within the salt bed left over from an evaporated 250-million-year old sea. The little brine that is found in WIPP is 10 times saltier than seawater. 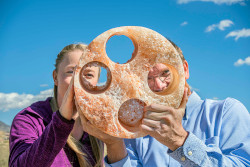 “Salt behaves much differently when it’s hot. If you heat up a piece of granite, it isn’t that different,” Kuhlman said. “Hot salt creeps much faster, and if it gets hot enough, the water in brine could boil off leaving a crust of salt on the waste container. Then that steam could move away until it gets cool enough to return to liquid and dissolve salt, possibly forming a complex feedback loop.”

In other words, the scientists are looking at whether the heat from spent nuclear fuel could help enclose waste containers, and even protect them from the corrosion that salty water can cause.

Planning for the experiment’s first phase began in 2017, using existing horizontal holes at WIPP. During this “shakedown” phase, researchers learned what equipment to use in subsequent experiments. For example, the first heater, which worked like a toaster, did not get the nearby salt hot enough to boil brine, said Phil Stauffer, a geoscientist with an expertise in combining computer models and real-world experiments who is leading Los Alamos National Laboratory’s contributions. However, the second heater the team tried, an infrared model, was effective; it worked more like the sun.

“When we put the first radiative heater into the first borehole, as part of the shakedown phase, it turns out the air didn’t allow the heat to efficiently move into the rock,” Stauffer said. “Then we switched to an infrared heater, and the heat moved through the air with little energy loss. In the early numerical simulations, naively we just put in heat; we didn’t worry about how the heat got from the heater into the rock.”

How brine and gases move through salt

During the experiment’s second phase, the team drilled two sets of 14 horizontal holes into the side of a hall and inserted more than 100 different sensors into the holes around the central horizontal hole containing the heater. These sensors monitored the sounds, strains, humidity and temperatures as the salt was heated and cooled. 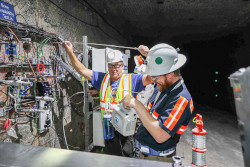 Melissa Mills, a Sandia geochemist, made a special salt-concrete seal for testing the interactions between cement and brine.

Among the sensors used were almost 100 temperature sensors, like those found in home thermostats, so researchers could measure temperature through time at locations around the heater. Yuxin Wu, a geoscientist from Lawrence Berkeley National Laboratory, also installed fiber-optic temperature sensors, strain gauges and electrical resistivity imaging.

Charles Choens, a Sandia geoscientist, used special microphones, called acoustic-emissions sensors, to listen to the “pop” of salt crystals as they expand while heated and contract while cooling, Kuhlman said. The team used these microphones to triangulate the location of the popping salt crystals.

To test the flow of gases through the damaged salt, the researchers injected small amounts of rare gases, such as krypton and sulfur hexafluoride, into one borehole and monitored their emergence in another, Kuhlman said. “When the salt was hot, the gases didn’t go anywhere. When we turned the heat off, the gases permeated the salt and came out in another borehole.”

Similarly, the team injected lab-made brine into one borehole with a small amount of the element rhenium and blue fluorescent dye as “tracers.” The team is monitoring for the emergence of the liquid in other boreholes, which will be sampled at the end of the test.

“The goal with the fluorescent dye — once we drill out post-test samples — is to map where the tracer went,” Mills said. “Obviously, we’ll be able to say that it went from one borehole to the other, if we detect a rhenium signal, but we won’t know the path it took. Also, brine will interact with minerals in the salt, like clay. The fluorescent dye is a visible way to identify where the liquid tracer actually went in the field.”

In the third phase, which began in mid-October, the team will be drilling a new array of nine heated boreholes, building on what they learned in the prior phases of the experiments.

The team has learned a lot from the first two phases of the experiment, including the best heater type, when to drill the boreholes and just how corrosive the brine is, Stauffer and Mills said. 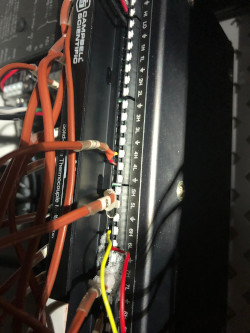 An example of corroded electronic equipment from brine seeping down an insulated wire. The pervasive nature of brine in the Waste Isolation Pilot Plant was just one of the challenges the Sandia National Laboratories-led research team overcame during the first two phases of their experiment. (Photo courtesy Sandia National Laboratories) Click on the thumbnail for a high-resolution image.

“The first two phases involved a lot of equipment testing; some has failed, and some was sent back to the manufacturer,” Mills said. “We’ve also learned to keep back-up equipment on hand because salt dust and brine destroys equipment. We need to double-seal things because the brine can seep down insulated wire and then equipment dies. It’s been a process to learn how to work in the salt environment.”

Kuhlman agreed. “Many things can go wrong when you take sensitive lab equipment and put it in a salt mine. We went back and read the reports from the WIPP experiments in the ’80s. We want to learn from the past, but sometimes we have had to make our own mistakes.”

The researchers are collaborating with international partners to use the data from this project to improve computer models of the complex chemical, temperature, water-based and physical interactions that take place underground. This will improve future modeling of nuclear waste repositories globally.

Ultimately, the team would like to scale up to larger and longer experiments to obtain data relevant to future salt repositories, said Kuhlman and Stauffer. These data, supplementing already collected data, would inform repository designers and policymakers about the safety of permanently disposing heat-generating nuclear waste in salt repositories.

“It’s been really intriguing and interesting, for me, to work on a project that is so hands-on,” Mills said. “Getting to design and build the systems and going underground into WIPP has been really rewarding. Doing research in an active mine environment can be a challenge, but I’ve been proud to work down there and implement our ideas.”