Atmospheric studies and more to continue at fixed Arctic observatory

ALBUQUERQUE, N.M. — After eight great years of observations and research, a Sandia National Laboratories-operated atmospheric measurement facility moved from Oliktok Point, on the North Slope of Alaska, this summer. The mobile facility will be relocating to the southeastern United States; the exact location is still being decided. 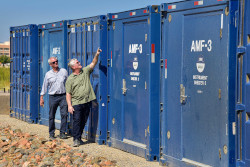 Mark Ivey, left, a Sandia National Laboratories senior engineer, and Fred Helsel, a systems engineer, inspect a shelter that had been stationed in Oliktok Point, Alaska. After eight great years of observations and research, a Sandia National Laboratories-operated Atmospheric Radiation Measurement mobile facility moved from Oliktok Point. (Photo by Randy Montoya) Click on the thumbnail for a high-resolution image.

The Department of Energy Office of Science’s Atmospheric Radiation Measurement mobile facilities collect important data on atmospheric, aerosol and cloud dynamics to refine climate and weather models. ARM’s third mobile facility was originally intended to stay in northern Alaska for only five years, but has been collecting and processing data at Oliktok Point since 2013.

Over the years at Oliktok, Sandia scientists — and researchers from across the country — have also conducted experiments on cloud dynamics, distributed acoustic sensing, unmanned aircraft systems, tethered balloons and more. Critical Arctic observations and scientific studies will continue at ARM’s fixed observatory 165 miles away at Utqiaġvik, formerly known as Barrow. The fixed ARM observatory in Utqiaġvik has been collecting data for almost 25 years.

“The DOE’s commitment to Arctic atmospheric observations and researcher-driven studies in Utqiaġvik is not changing at all,” said Lori Parrott, recently retired manager of Sandia’s atmospheric and Arctic sciences group. “The mobile facility at Oliktok Point offered a powerful extension of that facility, as it was on the Beaufort Sea instead of the Chukchi Sea with regional variation. We’re grateful that DOE is going to continue its mission of collecting unique atmospheric measurements to support the climate modeling community with its move of the mobile facility to the southeastern U.S.”

Arctic observations and DOE Office of Science experiments will continue at the Utqiaġvik observatory, which has been operating since the summer of 1997. Some specialized instruments, like snow measurement sensors, will move from the Oliktok Point facility to the Utqiaġvik facility, said Joe Hardesty, who leads the Sandia team that manages the DOE Alaska ARM facilities. He added, “We look forward to maintaining that long record of Arctic data and observations to serve the modeling community.”

Dari Dexheimer, a Sandia National Laboratories atmospheric scientist, and her team prepare to launch a 13-foot-tall tethered balloon, also known as a helikite, from ARM’s Oliktok facility. (Photo by Brent Peterson) Click on the thumbnail for a high-resolution image.

One notable example of how Sandia researchers were able to use the Oliktok location to conduct other research projects is Dari Dexheimer and her tethered balloons. She has regularly flown 13-foot-tall, sensor-laden tethered balloons at Oliktok since 2015. The balloons have collected important information about the temperature and supercooled liquid water content of Arctic clouds, which were then fed into climate models to fine-tune them.

“Being up at the mobile facility on Oliktok Point gave us an unparalleled opportunity to test and refine our expertise flying tethered balloons,” Parrott said. “Being able to insert instruments in a cloud from top to bottom, using our restricted airspace and stay in there to collect data over a long time, provided some unique datasets. It also gave our tethered balloon team great experience in improving our technology, strengthening the tethers, so that they could handle extreme conditions. Now we’re using that skill for other studies in Oklahoma, Texas and Colorado.”

Another experiment that will continue at Oliktok Point is Rob Abbott’s three-year distributed acoustic sensing interrogator project. His team uses unused fiber optic cable to capture data on the seafloor of the Arctic, including sounds from ice quakes and transportation activities. “They’re doing first-time-ever measurements up there,” said Mark Ivey, Sandia senior engineer and science liaison of the ARM facilities at Utqiaġvik and Oliktok.

One aspect of Oliktok Point that allowed for the testing and usage of the tethered balloons was the presence of special-use airspace, including a 700-mile-long, 40-mile-wide international warning area and a 4-mile-diameter restricted area. These enabled tethered balloon flights under protected conditions to prevent small aircraft from running into a tethered balloon hanging invisibly in a low cloud, Hardesty said. Sandia manages both the restricted airspace and the warning area for the DOE.

Sandia’s Arctic team is working with DOE on transferring management of Oliktok’s special-use airspace from the DOE’s Office of Science to the DOE Arctic Energy Office. This will allow DOE and Sandia to continue managing that resource for researchers across the nation to be able to use, said Hardesty.

Blowing snow at the Sandia National Laboratories-run ARM mobile facility in Oliktok Point. (Photo by Brent Peterson) Click on the thumbnail for a high-resolution image.

The special-use airspace has allowed for the testing of unmanned aircraft systems, colloquially known as drones, in extreme conditions. One collaboration with the Coast Guard allowed them to test search-and-rescue response in high latitudes, to include surveillance, detection and communications. Communication equipment doesn’t always work the same way at high latitudes as it does in the mid-latitudes, said Parrott. She added that this is due to special polar atmospheric physics that can cause interference.

“It’s still unknown, but the airspace transfer could lead to more significant research for Sandia, the DOE and other agencies,” Hardesty said. “We have retained some facilities and equipment at Oliktok and will use these to collaborate with other agencies. Going forward, we will want to use these, and the special-use airspace, to continue and expand our research at Oliktok. There will definitely be opportunities to continue conducting Arctic studies at our long-term facility in Utqiaġvik.”

Moving from clouds and drones to pollen and dust

The primary goal of ARM, which is a national scientific user facility operated by nine DOE national labs, is to collect data to refine climate models and address inconsistencies between models in the realm of atmospheric processes, Ivey said.

After consulting the scientific community in 2018, the DOE decided to move the mobile facility to somewhere in the southeastern corner of the country to allow the collection of new, important data on how the land, forests and aerosol properties impact atmospheric processes in that part of the nation, he added. The new location will be finalized this fall. The core facility should be up and running by the end of 2023.

The Oliktok mobile facility was packed up and shipped to Albuquerque this past summer, which the team accomplished ahead of schedule and under budget, Ivey said.

“There’s new atmospheric science to do in the southeastern U.S.,” said Ivey, who has been involved with ARM for almost 30 years, with a focus on the Arctic since 2004. “There’s a lot more interactions between aerosols like dust, smoke and pollen blowing around in that part of the world. We need to know more about the impact these particles have on how much sunlight comes down through the sky and bounces up through the sky.”

Some of the things that allowed for continuous operation of ARM facilities in the remote and harsh North Slope communities were the very close working relationships Sandia formed with service providers, oil companies, the Air Force, other federal agencies and Alaska Native corporations, such as the Utqiaġvik Inupiat Corporation, Parrott said.

A weather balloon launches automatically from ARM’s fixed observatory in Utqiaġvik, formerly known as Barrow. This facility has been operated by Sandia National Laboratories for 24 years and will continue to collect data and host experiments. (Photo by Brent Peterson) Click on the thumbnail for a high-resolution image.

“You may think that when you’re going from an Alaskan Native village like Utqiaġvik to Oliktok Point on Prudhoe Bay, you’ll see very large differences,” Parrott said. “But there are some human qualities that persist across them, such as depending upon and taking care of your neighbors.”

Hardesty agreed, and pointed out the importance of ARM’s close partnership with the NOAA observatory next door to the Utqiaġvik observatory and a great relationship with the University of Alaska Fairbanks. ARM’s Utqiaġvik facility will also continue to launch weather balloons for the National Weather Service.

Ivey added that the 611th Civil Engineer Squadron at the Air Force’s Joint Base Elmendorf-Richardson in Anchorage, Alaska is another particularly important relationship for continuing to do scientific research in the Arctic.

“Since we’ll be managing the airspace, and we have these strong relationships, I expect that we will be able to connect with other researchers who will have strong interest in understanding the changes that are occurring in the Arctic for both science and national security purposes,” Hardesty said. “I believe Sandia will play a growing role in that.”

All of the ARM facilities are supported by DOE’s Office of Science Biological and Environmental Research program.