ALBUQUERQUE, N.M. — Though researchers at the Sandia National Laboratories Thermal Test Complex study a variety of fires, they focus on those that rotate rather than burn in place. Whirls generate much higher heat fluxes than non-rotational fires. 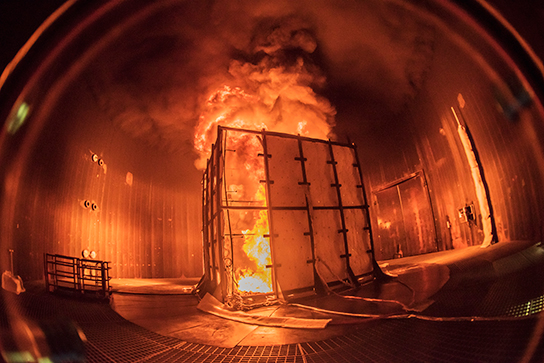 Massive flames billow from a 16-foot-high test enclosure placed within Sandia National Laboratories’ Thermal Test Complex. Researchers collect data from experiments at the complex. (Photo by Randy Montoya) Click on the thumbnail for a high-resolution image.

In a recent test, a flame that appeared as slender and vulnerable as Bambi showed up in the array of video screens monitoring the fire’s progress.

Within seconds, cameras recorded what appeared to be a forest fire of rushing flames in a 16-foot-high test enclosure. Then flames burst out the cell’s top like a creature in a monster movie, towering almost to the roof of the 50-foot-tall building that houses the cell. One video screen looked like a black-and-white movie of a large building in flames. A full-color screen imaged rich, yellow-red packets of flame whirling upward like escaping souls while outside video cams showed black smoke emerging from large stacks.

Fire whirls from a 3-meter diameter pool in the Fire Laboratory for Accreditation of Modeling by Experiment, or FLAME, facility at Sandia National Laboratories. (Photo by Richard Simpson) Click on the thumbnail for a high-resolution image, or watch video footage here.

Then a safety switch, sensing a possible electrical overload, turned off a 750-horsepower fan engaged in sucking in outside air to equalize the pressure of air leaving up the stack. Operators monitoring the feedback information immediately cut the supply of fuel. The inferno became a river of fire, then a stream of fire, then a rivulet and then it was gone.

But the data collected about its fierce, brief life remained.

That data, collected from this and other experiments at the extensive complex, can be used to qualify nuclear weapons hardware subjected to extreme conditions and to validate fire-physics models, said test director Anay Luketa.

“One objective of the current experiments is to create an extremely abnormal thermal environment, representative of what a weapon potentially could be exposed to,” said Luketa. “The current tests control boundary conditions and offer repeatable experiments, something difficult to achieve in outdoor flame tests where even a light wind can significantly tilt a fire plume.”

Whirls witnessed in forest fires and in urban areas have demonstrated disastrous impacts as well, due to the generation of extremely high velocities coupled with high heat release rates, said Luketa.

The flame team measures temperatures, heat flux, flame velocity and height and burn rate of these whirling fire plumes. The whirl is created in an open-top, square enclosure surrounding a pool of fuel. The enclosing walls don’t meet at the corners; instead, gaps are positioned to produce a rotational pattern of inflowing air induced by the fire. This causes the flame to spin and rise in a vortex from a pond of burning jet fuel contained in a 3-meter diameter pan. 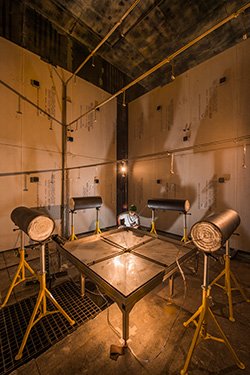 Tom Blanchat prepares a fuel pan and calorimeter test in the Cross Flow Fire Test Facility, or XTF, at Sandia National Laboratories. (Photo by Randy Montoya) Click on the thumbnail for a high-resolution image.

Members of the fire team wear burn suits where appropriate and follow 20 pages of instructions to ensure safe handling of materials and proper ignition and close-down. They methodically turn on pumps, enable valves, bleed fuel to purge unwanted air from the system, thereby minimizing false readings, and lock a succession of safety doors before powering up the ignitor. Basement cameras check for dripping fuel. A simple hammer tap creates a sound-signal that allows researchers to synchronize data collected from video cameras placed throughout the structure.

An environmentally approved process adds ammonia within the external smokestack to precipitate soot, a potentially hazardous waste material, onto a large plate; simple banging with large pneumatic actuators drops the soot into a collection container after a test. Another safety measure: The roof of the building can lift if necessary to reduce excess pressures by allowing fire-heated gasses to escape.