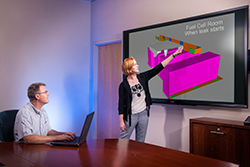 In its San Francisco Bay Renewable Energy Electric Vessel with Zero Emissions study, known as SF-BREEZE, researchers at Sandia National Laboratories concluded liquid hydrogen fuel cells are feasible on technical, regulatory and economic bases. Now, researchers are taking the work to the next level in a second study that focuses on:

“The Maritime Administration sees immense potential in the use of hydrogen fuel cells to provide efficient, clean, domestically produced power for the maritime sector. The current effort to improve the economic viability using fuel cells in a commercial vessel will bring this vision one step closer to reality,” said John Quinn, Maritime Administration associate administrator for environment and compliance.

The initial feasibility study focused on a 150-passenger ferry traveling at 35 knots per hour. Now, mechanical engineer and project lead Joe Pratt is asking whether it makes sense to design ferries that are faster or slower, larger or smaller.

Sandia Labs started by plotting typical speeds and passenger capacities of about 600 passenger ferries in the U.S., and found that the ferry studied in the SF-BREEZE project was actually an outlier, being faster and having fewer passengers than most.

“Although previous work on the SF-BREEZE project demonstrated the feasibility of utilizing hydrogen fuel cells for propulsion power on a high-speed passenger vessel, it became apparent that there may be better economic returns when applied to slower speed vessels,” said Curt Leffers, project manager at Elliott Bay Design Group, who is leading the naval architecture work in the new study. “The next logical step in the process is to examine the effect of speed and passenger count on the overall cost and per-passenger emissions for hydrogen fuel cell-powered passenger vessels, which is why the optimization study is important.”

Pratt added, “How do you achieve the best economics compared to conventional diesel technology and the best gain in environmental impact? Answering these questions is how we’ll be quantifying the merit of different designs.”

The study seeks to make the trade-offs for the shipbuilding and ferry industries clear. The heavier and faster the vessel, the more power is required. To obtain more power, fuel cells — the most expensive part on a hydrogen-powered ferry — must be added, which drives up the cost, Pratt said.

Sandia hopes to produce a half dozen ferry concepts to demonstrate which are most economical and which will make the most impact on protecting the environment, he said.

Tom Escher is president of a San Francisco Bay operator, the Red and White Fleet, which was a partner in the initial study. He said he looks forward to moving ahead with new ferry designs.

“The maritime industry needs to move to zero emissions for the sake of our globally shared environment,” Escher said. “This study is tremendously helpful by pointing out how to do that in the smartest way possible, and we look forward to using the results to build the first zero emission hydrogen passenger vessel in the U.S.”

Sandia is reviewing International Maritime Organization codes for liquid natural gas-powered vessels and developing a technical basis for codes that could be created for hydrogen fuel-cell vessels. Currently, liquid natural gas codes are the closest regulations that can be applied to hydrogen-powered vessels, but they may not accurately represent the properties of hydrogen.

For example, the LNG code requires LNG vessels to have a clearance of 30 feet around all sides of their vents. Hydrogen is lighter than natural gas and much lighter than air, so it does not sink in air like LNG does. Thus, a 30-foot clearance underneath a vent might not be a necessary requirement for a hydrogen ferry, said Sandia Labs mechanical engineer Myra Blaylock, technical lead for the project.

Labs researchers are using computer simulation to explore and analyze four common vent and leak scenarios in which hydrogen could be released on-board vessels to show actual hydrogen behavior.  The computational simulations have underlying physics models that have been validated through experiments and allow researchers to confidently explore various scenarios in a quicker and less-expensive way than conducting experimental work for each individual case. The results can be used by the International Maritime Organization to ensure the accuracy of the codes when applied to hydrogen vessels.

The possibility of extending the applications of hydrogen fuel cells, showing the industry the best path forward and providing the technical basis for new hydrogen regulations, all have “the potential for impact across the entire maritime sector,” Pratt said. “A lot of these vessels can travel in ecologically sensitive areas where there is an extra motivation for making them clean. So it’s about localized as well as global emissions benefits.”