ALBUQUERQUE, N.M. — Sandia National Laboratories helped design the first generation of fueling stations for hydrogen-powered cars so that they’re as safe as conventional gas stations. Now, Sandia is working to do the same for the next generation of hydrogen stations.

To keep up with growing demand for hydrogen fuel, retailers need to build many more fueling stations. This expansion requires switching from gaseous to liquid hydrogen because liquid, being denser than gas, enables retailers to store more of it in the same amount of space.

A new Cooperative Research and Development Agreement with Sandia will allow the largest hydrogen retailer in the U.S. to date, First Element Fuel,  to build many more of these cutting-edge liquid hydrogen stations. It will also help modernize the National Fire Protection Association safety codes pertaining to liquid hydrogen safety distances, which have not been updated in decades. The updated codes will in turn benefit hydrogen retailers and fire marshals in designing and permitting new, safer stations.

Using first-of-its kind Sandia-designed software, the Sandia research team is quantifying the effect of hydrogen leaks from various system designs and the safety measures used to detect and protect against the effects of leaks. 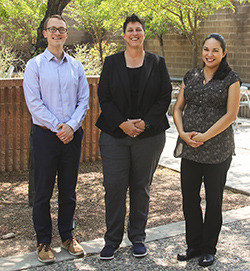 “We can ask these ‘what if’ questions, such as ‘how could a leak happen here?’ and ‘how can we mitigate the effects?’ so that the leaks have less of a chance of causing problems,” explained project co-leader Chris LaFleur. “This way, we can enable hydrogen fueling of fuel cell vehicles in places it’s never been able to go before, like the busy downtowns of big, densely-packed cities.”

Cars powered by hydrogen refill as quickly as those powered by gasoline and drive just as far. In addition, the only emission from their tailpipes is pure water — a factor in their growing popularity. One of the biggest obstacles for the growth of hydrogen-fueled transportation is building enough fueling stations.

“We need more stations and larger, faster, better equipment because we have more customers and more demand than we’d ever dreamed,” said Tim Brown, COO of First Element Fuel.

First Element currently operates 19 stations in California, each with only one pump and one hose. Stations operated by other retailers are similarly limited.

Even though there are only about 5,000 hydrogen fuel cell cars on the road today in the U.S. – Toyota Motor Corp., Honda Motor Company Ltd. and Hyundai Motor Company all sell them — the fuel supply is not enough to keep lines of drivers from accumulating at the stations, Brown said.

Once Mercedes-Benz, General Motors and others bring their fuel cell models to market, fuel needs will only increase. First Element plans to open a dozen new hydrogen fuel stations in California in 2019 to meet this demand.

Currently, the U.S. retail hydrogen market is mainly in California due to government policies that incentivize automakers to sell in the state — with the bulk of stations located in the San Francisco Bay, Los Angeles and San Diego areas. Other states are also planning commercial stations in the next few years for both passenger cars and heavy duty vehicles like buses and trucks.

The ‘what if’ safety questions are ones the team has previously answered with respect to models of gaseous hydrogen leaks. However, liquid hydrogen carries its own set of unique benefits and challenges.

On the one hand, liquid hydrogen can be stored at significantly lower pressure than gas, which lowers the risk of a leak. However, liquid hydrogen is also cryogenic, meaning it must be kept very cold (roughly negative 423 degrees F).

“When released, liquid hydrogen can actually freeze the air around it,” said Sandia risk analyst Brian Ehrhart. “This presents a challenge for calculating the concentration of hydrogen in the air.”

The amount of hydrogen and oxygen in either the gas or liquid state is interdependent, since the more one liquifies, the more one warms and vice versa. The team negotiates this challenge by assuming an initial “zone” of hydrogen/air mixing that warms the mixture to a point at which Sandia’s gas dispersion models can predict behavior.

This simplification allows the team to predict how far away from the leak the flammable concentration exists, rather than focusing on the mixture right next to the release and using more expensive fluid dynamics models.

One result of this modeling process is that First Element Fuel will have rigorous, science-based evidence to help them obtain permits for the 12 stations they are planning to build.

“Sandia is the gold standard as far as the science goes,” Brown said, “If Sandia’s results show x, y and z, then I believe they’re x, y and z. There’s no second guessing. I know it’s right, the fire marshal knows it’s right and so does everyone else. Sandia brings the professionalism, rigor and accuracy I don’t think I can get anywhere else.”

Sandia also benefits from the project, because it allows the team to demonstrate their models on real-life system designs. Furthermore, Sandia works directly with the National Fire Protection Association, and the data from this project will be used to inform and update their liquid hydrogen safety codes.

The new code will allow future fueling stations to be evaluated from a performance-based standard, rather than a prescriptive one. LaFleur shared a cooking analogy to explain the difference between the two types of codes. “A prescriptive code is like a recipe that calls strictly for 3 cups of flour, 2 ounces of chocolate, and 3 eggs to make a cake. A performance-based standard says, ‘make a chocolate cake 3 inches high that tastes good,’ and you get to decide how to go about that,” she said.

The updated performance-based codes will make it easier for retailers in any part of the country to build safe stations, even if they can’t meet certain precise code requirements. That in turn will encourage growth within the hydrogen vehicle industry.

Sandia’s modeling work also supports the U.S. Department of Energy’s H2@Scale initiative, which focuses on large-scale production of hydrogen from diverse domestic resources. The project also considers the use of hydrogen across multiple sectors such as steel manufacturing, fertilizer production, petroleum refining and transportation.

“Our mission has always been to foster the adoption of these cars, ensuring better air quality and energy security,” Brown said. “That is the part of the project that will live on beyond the particular stations we’re building right now.”