Water use cut in half at federal lab in Colorado, thanks in part to Sandia

Sandia engineer honored for his help

ALBUQUERQUE, N.M. — A Sandia National Laboratories engineer has won a Department of Energy environmental award for helping halve the amount of water used to cool a high-performance computer data center in 2017 at the National Renewable Energy Laboratory in Golden, Colorado. 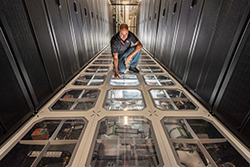 David J. Martinez, engineering project lead for Sandia’s infrastructure computing services, received the DOE’s Federal Energy and Water Management Award for his contribution to a technique that saved water by substituting a reusable liquid refrigerant in place of evaporative-water cooling towers when outside temperatures are low enough to make that feasible.

A system using the technique will be installed at Sandia by 2019, Martinez says. The advance is credited with saving NREL 1.15 million gallons of water last year, and he anticipates even more savings at Sandia, which has more high-performance computers.

The refrigerant’s cooling process doesn’t require an electrically powered pump. Instead, it relies upon simple convection.  The hot water from the data center causes the refrigerant to turn from liquid to gas, which removes energy through the phase change.  The refrigerant then rises to a heat exchanger where the outside air cools it off so that it can re-liquefy.  The liquid refrigerant then returns to the original reservoir via gravity and the process starts again.

Unlike water cooling towers, no water evaporates during the process, which works when the outside temperature is at most a few degrees warmer than the heat being given off by the water. If the air is warmer than that, the evaporative cooling towers kick in. The joint process is called hybrid thermosyphon cooling.

More efficient facility designs are employed to cool down the rooms housing the computers, says Martinez. These improvements — like smart fans that self-adjust to blow only the air needed without creating air whorls that themselves require more cooling — mean a syphon can cool even hotter rooms without the need of the evaporative cooling tower.

The awards recognize people and organizations who have made significant contributions to energy and water efficiency within the federal government.

“I helped as a consultant on the design of NREL’s data-cooling center for their first high performance computing system,” says Martinez, who has 30 years of experience putting together heating, cooling and power systems. “I work with them on different systems. I collaborate on fuel cells, liquid cooling and other improvements. l like those guys, they’re like me: they push the envelope in saving energy and water.”

The victors will receive their awards at a ceremony at the United States Institute of Peace in Washington, D.C., on Oct. 23.