“I feel highly honored,” said Schwank, who is the second active Sandia employee to win the award and the sixth person in the radiation effects community to win since the award’s inception in 1972. The winner was announced earlier this month during the IEEE’s Nuclear and Space Radiation Effects conference. 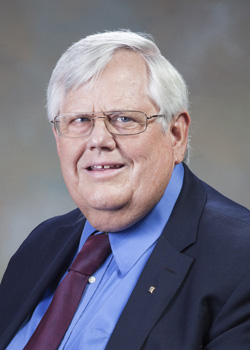 The citation reads: “For significant and sustained contributions to the understanding of radiation effects in semiconductor devices and to the development of radiation-hardened technologies.” The award is based on the importance of individual technical contributions, importance of technical contributions made by teams the individual led, quality and significance of publications and patents, years of technical distinction and leadership, and service in the fields of nuclear and plasma sciences and related disciplines.

He has won 16 conference outstanding paper awards, nine conference meritorious paper awards, a Department of Energy Weapons Award of Excellence, a Discover Magazine Technology Award for Computer Hardware and Electronics, an Industry Week Technology Award, an R&D 100 Award and three Sandia Employee Recognition Awards and is on the Thomson-ISI top 250 Highly Cited Researchers list worldwide for 1983-2002. His papers have been cited more than 5,700 times in refereed journals.

Paul Dodd, a Sandia colleague, nominated him. His nomination letter said that for three decades, Schwank has “performed leading-edge research to expand the understanding of the fundamental physics behind total ionizing dose and single-event effects in microelectronics,” applying the work to developing radiation-hardened devices for military and space systems and contributing to the development of reliable and cost-effective hardness assurance test methods. In addition, noting Schwank’s 13 Nuclear and Space Radiation Effects Conference Outstanding Paper Awards, Dodd wrote that one such award is a significant accomplishment, but winning 13 is exceptional.