R&D Magazine presents the awards each year to researchers whom its editors and independent judging panels determine have developed the year’s 100 most outstanding advances in applied technologies. Qualities judged include smaller size, faster speed, greater efficiency and environmental efficiency and sensitivity.

“These awards recognize the tremendous value of our national labs,” said Secretary of Energy Ernest Moniz. “Research and development at the national labs continues to help our nation address its energy challenges and pursue the scientific and technological innovations necessary to remain globally competitive.”

The awards focus on practical impact rather than pure research and reward entrants for the design, development, testing and production of their innovations. The sole criterion for winning, according to the magazine, is “demonstrable technological significance compared with competing products and technologies.”

The winners of the awards, sometimes referred to “the Oscars of invention,” will receive plaques at a formal banquet this fall.

Winning entries from Sandia are: 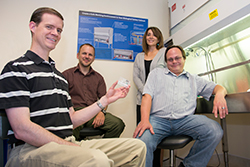 The anthrax bacillus is not only a tool of terrorists but also is found naturally in farms and remote areas around the world. Like abandoned live ammunition, it waits to cause problems. In an emergency or in a distant country far from a medical laboratory, how would anyone detect its presence? The Sandia anthrax detector cartridge, about the size of a credit card, might be one answer. The inexpensive, throwaway device works much like a pregnancy detector: the presence of certain chemicals causes a positive reaction in antibodies installed inside the detector. Previous attempts to devise analogous detectors for anthrax lacked the needed sensitivity. The Sandia system, funded by the Laboratory Directed Research and Development,  achieves this through an ingenious microculture chamber that encourages a sparse sample of microorganism to grow to a detectable amount. The device does not require any power or extra equipment to store, operate or read; users need minimal training; and its self-destruct feature sterilizes the device after each use. 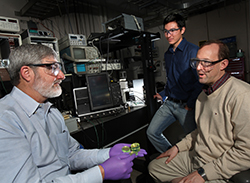 Millions of barrels of cargo are unloaded from ships to U.S. soil every year. Automated sensors screen cargo at ports of entry for controlled radiological materials that could be used to make a nuclear weapon. The detectors scintillate (glow) when they pick up tell-tale emissions. Sandia researchers Patrick Feng and his team have developed a new plastic scintillator — solid, instead of inconvenient liquid — that gives off more light at less cost, and responds faster than current scintillators. The unique timing response also provides the ability to discriminate threat materials from benign radiation sources. Triplet-harvesting refers to a process that converts energy from an organic polymer matrix to highly luminescent triplet energy states on organometallic dopant complexes. The scintillator was funded by the National Nuclear Security Administration and Sandia’s Laboratory Directed Research and Development program. 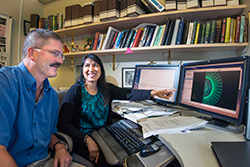 Sandia National Laboratories researchers Randall Schunk and Rekha Rao discuss an image generated by the Goma 6.0 program. (Photo by Randy Montoya) Click on the thumbnail for a high-resolution image.

Goma 6.0 is open-source software available to those interested in simulating manufacturing processes. For example, the creation of plastic wrap involves a complex interplay between energy, fluid flow and complex material response that helps determine the force needed to pull the wrap into existence. The resulting sheet should be transparent, without lumps and bumps, and strong but not so strong that it can’t be cut. For this and other material-processing problems, such as making flat-panel glass, producing reinforced materials for power lines, and drying polymers, Goma 6.0 efficiently solves the underpinning equations of mass, momentum, energy and chemical species transport. The program has unprecedented flexibility for mixing and matching physical-chemical interactions and for developing specialty physics models. Goma excels at problems in capillary hydrodynamics, such as coating flows and liquid absorption by a porous material, and has extensive models as well for polymer and metal processing. Goma’s ease of use makes it valuable for graduate students learning the benefit of code development for research as well as high-end analysts in topical manufacturing and related industries. Goma was funded by the Laboratory Directed Research and Development program, the National Nuclear Security Administration, the National Science Foundation and others.