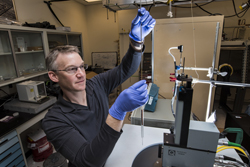 Sandia National Laboratories researcher Todd Monson and his colleagues have demonstrated the fabrication of iron nitride transformers in power-conversion test beds. (Photo by Randy Montoya) Click on the thumbnail for a high-resolution image.

ALBUQUERQUE, N.M. — A Sandia-led team has developed a way to make a magnetic material that could lead to lighter and smaller, cheaper and better-performing high-frequency transformers, needed for more flexible energy storage systems and widespread adoption of renewable energy.

The work is part of a larger, integrated portfolio of projects funded by Department of Energy’s (DOE) Energy Storage Program in the Office of Electricity Delivery and Energy Reliability.

Transportable energy storage and power conversion systems, which can fit inside a single semi-trailer, could make it cost effective to rapidly install solar, wind and geothermal energy systems in even the most remote locations.

“Such modular systems could be deployed quickly to multiple sites with much less assembly and validation time,” said Sandia researcher Todd Monson of Nanoscale Sciences Department, who led the team with Stan Atcitty of Sandia’s Energy Storage Technology & Systems Department.

Sandia manufactures iron nitride (γ’-Fe4N) powders by ball-milling iron powders in liquid nitrogen and then ammonia. The iron nitride powders are then consolidated through a low-temperature field-assisted sintering technique (FAST) that forms a solid material from loose powders through the application of heat and sometimes pressure.

The FAST manufacturing method enables the creation of transformer cores from raw starting materials in minutes, without decomposing the required iron nitrides, as could happen at the higher temperatures used in conventional sintering. Previously, the γ’ phase of iron nitride has only been synthesized in either thin-film form in high-vacuum environments or as inclusions in other materials, and never integrated into an actual device.

Monson said using this method could make transformers up to 10 times smaller than they are currently.

“FAST enables the net-shaping of parts, meaning that iron nitride powders can be sintered directly into perfectly sized parts, such as transformer cores, which don’t require any machining,” Monson said.

Due to its magnetic properties, iron nitride transformers can be made much more compact and lighter than traditional transformers, with better power-handling capability and greater efficiency. They will require only air cooling, another important space saver. Iron nitride also could serve as a more robust, high-performance transformer core material across the nation’s electrical grid.

So far, Monson and his colleagues have demonstrated the fabrication of iron nitride transformer cores with good physical and magnetic characteristics and now are refining their process and preparing to test the transformers in power-conversion test beds.

Monson, Atcitty and their team built on Sandia’s expertise in power electronics and magnetic materials in strong collaborations with University of California, Irvine, and Arizona State University researchers, who helped with materials processing and systems-level modeling.

Team members from Sandia and UC Irvine have filed a patent application for the materials synthesis process.