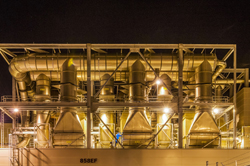 The IX model allows planners to experiment with energy conservation measures, such as adding cool roofs or replacing old heating, ventilation and air conditioning (HVAC) systems, before making expensive changes. It also models operations-oriented conservation methods, such as changing the temperatures in buildings and changing the ramp-up and -down times of HVAC systems.

“IX integrates energy conservation effects across many buildings, using many conservation methods and renewable energy options, over many years. This allows planners to experiment with many different strategies across the entire institution and over time. It allows them to select the strategies that save the most energy and then demonstrate their effectiveness,” said Sandia facilities manager Jack Mizner.

The IX model builds on eQUEST, Department of Energy building modeling software that allows users to model one building at a time for one year at a time, in 3-D, from the building-wide HVAC system down to individual offices, thermostats and electrical outlets.

Sandia researchers worked with eQUEST expert and Arizona State University professor Marlin Addison and Matt Schaffer and Robert Conley from Bridgers and Paxton Consulting Engineers Inc. in Albuquerque, to put together the IX model, which integrates individual eQUEST models using Microsoft Visual Basic and Excel platforms. The IX model can simulate building infrastructure and evaluate energy reduction opportunities across the institution for many years into the future.

“How do you transform existing institutional infrastructure to lower the energy footprint when you have hundreds of buildings across two sites and hundreds of square miles? How do you go about doing it in a cohesive, thoughtful and highly efficient way? This is the problem large institutions such as Sandia are facing,” said research project lead Howard Passell.

The collaboration between Sandia researchers and its facilities organization is unusual. Energy and Climate Program Management Unit Vice President Steve Rottler and Infrastructure Operations Division Vice President Mike Hazen have teamed up to make energy conservation at Sandia a labs-wide goal by incorporating work from the research and development and the operations sides of the labs.

“We want to use Sandia as a testbed for new energy conservation technologies and operations rules,” Rottler said.

The pilot IX model of Sandia Labs is based on detailed models of 114 Sandia buildings in New Mexico and California larger than 10,000 square feet, which consume more than 90 percent of the labs’ energy.

Using the IX model, Mizner and his team have identified energy conservation and operational measures that will help Sandia meet its energy reduction goals. These measures include the use of higher-efficiency lighting, heat exchangers, improved central plant efficiencies, digital control systems for buildings and operational changes.

“We have already reduced our energy use by more than 9 percent in less than three years, and saved over $2 million. The energy reductions came from improving central heating and cooling; plant efficiency; building operations; installing vacancy and occupancy sensors that control lighting and HVAC operations; and performing better energy audits,” Mizner said.

The IX project, in its third year and with phase one due to be completed this month, will help Sandia meet its ambitious goal of reducing its energy consumption by 25 percent by 2017, Mizner said

“Big institutions all over the world will need to reduce their energy footprints,” Passell said. “IX gives us a tool to help figure out how to do it in a smart and effective way. We already have smartphones, and we’re talking about getting smart grids. This work is about creating smart and sustainable institutions.”

Future efforts on the IX model will be aimed at integrating costs of different conservation strategies and at simulating institutional strategies and tradeoffs for water conservation and for transportation energy reduction options on and off campus.

Cool roofs not so hot for data centers in New Mexico

The application of cool roofs — roofs with extra insulation and white surfaces for reflecting sunlight — offer a great example of the way the IX model is informing facilities planning at Sandia.

“Remember when there was talk about putting cool roofs on all buildings? It turns out that cool roofs work for some types of buildings in some climates, but not for others,” Howard Passell said.

“Load-dominated buildings, such as data centers, produce a lot of heat, and they need to release that heat efficiently, particularly in a hotter climate like ours. If you put a cool roof on that building, it comes with added roof insulation that traps the heat inside, increasing energy costs for cooling,” Passell said.

Contrast that with skin-dominated buildings, for which the interior temperature is more strongly affected by the outdoor temperature. Cool roofs could be advantageous for them.

“The IX model allowed us to assess the impact that cool roofs could have across the labs, and it became clear that there would be little benefit if we put them on most of the buildings,” Passell said.