ALBUQUERQUE, N.M. — Researchers at Sandia National Laboratories’ Z machine have produced a significant output of fusion neutrons, using a method fully functioning for only little more than a year. 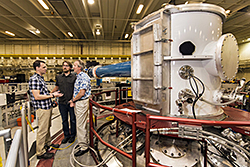 At the heart of Sandia National Laboratories’ Z machine, Matt Gomez, left, presents an idea to Steve Slutz, right, while Adam Sefkow looks on. (Photo by Randy Montoya) Click on the thumbnail for a high-resolution image.

“We are committed to shaking this [fusion] tree until either we get some good apples or a branch falls down and hits us on the head,” said Sandia senior manager Dan Sinars. He expects the project, dubbed MagLIF for magnetized liner inertial fusion, will be “a key piece of Sandia’s submission for a July 2015 National Nuclear Security Administration review of the national Inertial Confinement Fusion Program.”

Inertial confinement fusion creates nanosecond bursts of neutrons, ideal for creating data to plug into supercomputer codes that test the safety, security and effectiveness of the U.S. nuclear stockpile. The method could be useful as an energy source down the road if the individual fusion pulses can be sequenced like an automobile’s cylinders firing.

It only took the two magnetic fields and the laser, focused on a small amount of fusible material called deuterium (hydrogen with a neutron added to its nucleus), to produce a trillion fusion neutrons (neutrons created by the fusing of atomic nuclei). Had tritium (which carries two neutrons) been included in the fuel, scientific rule-of-thumb says that 100 times more fusion neutrons would have been released. (That is, the actual release of 10 to the 12th neutrons would be upgraded, by the more reactive nature of the fuel, to 10 to the 14th neutrons.)

Still, even with this larger output, to achieve break-even fusion — as much power out of the fuel as placed into it — 100 times more neutrons (10 to the 16th) would have to be produced.

The gap is sizable, but the technique is a toddler, with researchers still figuring out the simplest measures: how thick or thin key structural elements of the design should be and the relation between the three key aspects of the approach — the two magnetic fields and the laser.

The first paper, “Experimental Demonstration of Fusion-Relevant Conditions in Magnetized Liner inertial fusion,” (MagLIF) by Sandia lead authors Matt Gomez, Steve Slutz and Adam Sefkow, describes a fusion experiment remarkably simple to visualize. The deuterium target atoms are placed within a long thin tube called a liner. A magnetic field from two pancake-shaped (Helmholtz) coils above and below the liner creates an electromagnetic curtain that prevents charged particles, both electrons and ions, from escaping. The extraordinarily powerful magnetic field of Sandia’s Z machine then crushes the liner like an athlete crushing a soda can, forcefully shoving atoms in the container into more direct contact. As the crushing begins, a laser beam preheats the deuterium atoms, infusing them with energy to increase their chances of fusing at the end of the implosion. (A nuclear reaction occurs when an atom’s core is combined with that of another atom, releasing large amounts of energy from a small amount of source material. That outcome is important in stockpile stewardship and, eventually, in civilian energy production.) Trapped energized particles including fusion-produced alpha particles (two neutrons, two protons) also help maintain the high temperature of the reaction.

“On a future facility, trapped alpha particles would further self-heat the plasma and increase the fusion rate, a process required for break-even fusion or better,” said Sefkow.

The actual MagLIF procedure follows this order: The Helmholtz coils are turned on for a few thousandths of a second. Within that relatively large amount of time, a 19-megaAmpere electrical pulse from Z, with its attendant huge magnetic field, fires for about 100 nanoseconds or less than a millionth of a second with a power curve that rises to a peak and then falls in intensity. Just after the 50-nanosecond mark, near the current pulse’s peak intensity, the laser, called Z-Beamlet, fires for several nanoseconds, warming the fuel.

According to the paper’s authors, the unusual arrangement of using magnetic forces both to collapse the tube and simultaneously insulate the fuel, keeping it hot, means researchers could slow down the process of creating fusion neutrons. What had been a precipitous process using X-rays or lasers to collapse a small unmagnetized sphere at enormous velocities of 300 kilometers per second, can happen at about one-quarter speed at a much more “modest” 70 km/sec. (“Modest” only comparatively; the speed is about six times greater than that needed to put a satellite in orbit.) 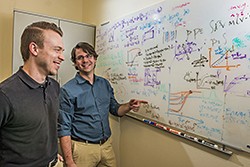 The slower pace allows more time for fusible reactions to take place. The more benign implosion also means fewer unwanted materials from the collapsing liner mix into the fusion fuel, which would cool it and prevent fusion from occurring. By analogy, a child walking slowly in the ocean’s shallows stirs less mud than a vigorously running child.

Sandia senior scientist Mike Campbell said, “This experiment showed that fusion will still occur if a plasma is heated by slow, rather than rapid, compression. With rapid compression, if you mix materials emitted from the tube’s restraining walls into the fuel, the fusion process won’t work; also, increased acceleration increases the growth of instabilities. A thicker can [tube] is less likely to be destroyed when contracted, which would dump unwanted material into the deuterium mix, and you also reduce instabilities, so you win twice.”

Besides the primary deuterium fusion neutron yields, the team’s measurements also found a smaller secondary deuterium-tritium neutron signal, about a hundredfold larger than what would have been expected without magnetization, providing a smoking gun for the existence of extreme magnetic fields.

The question remained whether it was indeed the secondary magnetic field that caused the 100-fold increase in this additional neutron pulse, or some other, still unknown cause. Fortunately, the pulse has a distinct nuclear signature arising from the interaction of tritium nuclei as they slow down and react with the primary deuterium fuel, and that interaction was detected by Sandia sensors.

The secondary magnetic field is the subject of the second, theoretical paper, “Understanding fuel magnetization and mix using secondary nuclear reactions in magneto-inertial fusion.” Using simulations, Sandia researchers Paul Schmit, Patrick Knapp, et al confirmed the existence and effect of extreme magnetic fields. Their calculations showed that the tritium nuclei would be encouraged by these magnetic fields to move along tight helical paths. This confinement increased the probability of subsequently fusing with the main deuterium fuel.

“This dramatically increases the probability of fusion,” Schmit said. “That it happened validates a critical component of the MagLIF concept as a viable pathway forward for fusion. Our work has helped show that MagLIF experiments are already beginning to explore conditions that will be essential to achieving high yield and/or ignition in the future.”

The foundation of Sandia’s MagLIF work is based on work led by Slutz. In a 2010 Physics of Plasmas article, Slutz showed that a tube enclosing preheated deuterium and tritium, crushed by the large magnetic fields of the 27-million-ampere Z machine and a secondary magnetic field, would yield slightly more energy than is inserted into it.

A later simulation, published January 2012 in Physical Review Letters by Slutz and Sandia researcher Roger Vesey, showed that a more powerful accelerator generating 60 million amperes or more could reach “high-gain” fusion conditions, where the fusion energy released exceeds by more than 1,000 times the energy supplied to the fuel.

A paper led by Sefkow et al, published July 24, in Physics of Plasmas, further explicated and designed the experiments based on predictions made in Slutz’s earlier paper.

But, said Campbell, “there is still a long way to go.”